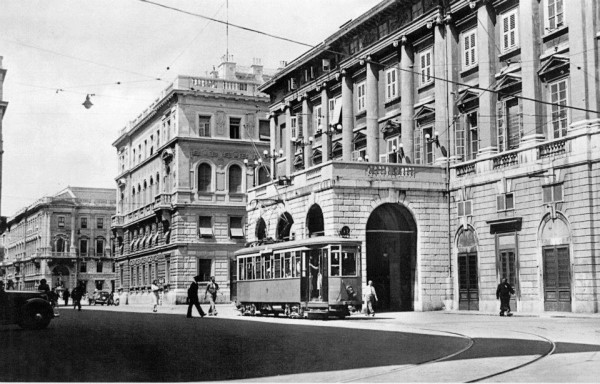 The Verdi Theatre, founded as “Teatro Nuovo”, is one of the oldest running opera houses. It was built between 1798 and 1801, under a proposal of Giovanni Matteo Tommasini, by the architects Giannantonio Selva (the same that built the “Fenice” in Venice) and Matteo Pertsch. It raised on an open area by the seaside, between “Borgo Teresiano” (Theresia suburb), the new Town – commercial and economic centre – and “Piazza Grande” (Great Square), heart of the political power.

The structure of the building resembles that of the Theatre “La Scala” in Milan – including the porch leaning forward to draw the audience to the theatre – which was designed by architect Giuseppe Piermarini, who was also consulted for the definition of the internal layout.

The façade is articulated: a strip composed of pilasters and giant Ionic half-columns, alternating with windows, surmounts the central porch, which has round arches.
The sculpture on the top of the building represents the god Apollo with Lyric Art and Tragic Art by his sides.

In 1882-84 Eugenio Geiringer built the current back façade which, ending the moving of the building of six metres towards the sea, resembles the main façade, thus making the entire structure more complete and decorous.

The inauguration took place on April 21st 1801, with Ginevra di Scozia by Simone Mayr and Annibale in Capua by Antonio Salieri, while the adjoining “San Pietro” Theatre, which had been until then the center of the intense theatrical life of Trieste in 1700s, was definitely closed.

The theatre has been the symbol of Trieste’s Italian cultural identity, spreading the knowledge of Italian musical culture in neighbouring German and Slavic-speaking regions, whilst at the same time interpreting the city’s cosmopolitism by spotlighting the works of Central Europe composers. The activity of “Teatro Nuovo” has been very intense since the beginning; all the operas, ballets, dramas, comedies which achieved success on the Italian and European scene, were soon welcomed by the local theatre, crowded with an audience of enthusiasts and connoisseurs.

Rossini was premiered in Trieste with L’Italiana in Algeri (1816), Donizetti with L’Ajo nell’imbarazzo (1826), Bellini with Il Pirata (1831), Auber with La Muta di Portici (1832) and Thomas with Mignon (1870). Verdi debuted with Nabucco (January 11th 1843), followed by all the others, most of which staged soon after the premiere; two works were, in fact, composed by Verdi for the “Nuovo”: Il Corsaro (October 25th 1848) and Stiffelio, starring the singer Giuseppina Strepponi, that the musician personally conducted (November 16th 1850).

Refurbishment and restoration work was carried out several times over the years, in 1819, 1834, 1848, 1881/84, when the original seating capacity of 1,400 was increased to 2,000; gas lighting was replaced by electricity in 1889. More recently, substantial changes have taken place in 1950, while a radical restoration, including structural consolidation and the renovation of technical facilities in order to comply with current safety standards, took place between 1992 and 1997, with the moving of the activity to the newly-built Tripcovich Theatre: with a capacity of about 900 seats, even after the reopening of the historical site it continues to be used for several events (opera, symphonic and chamber music concerts, plays, meetings, etc.).

The opera house – which has a Ridotto, or foyer, with a former capacity of 700, now 224 seats – has changed its name several times: in 1821 it was named “Teatro Grande” (Great Theatre); in 1861, after the City Council had bought it, it became “Teatro Comunale” (City Theatre) and, on January 27th 1901, it was dedicated to Giuseppe Verdi by an extraordinary meeting of the City Council, just a few hours after the death of the great composer.

Transformed into a private law foundation in 1999, the theatre is currently administered by the Fondazione Teatro Lirico Giuseppe Verdi di Trieste as the most important venue, increasingly being identified with the life of the city. During its two-century history, the opera house has, in fact, been the focal point of the civil and cultural life of Trieste, who has lived, with the Napoleonic occupation until 1814, the period of membership to the French Empire as part of the Illyrian Provinces; the restoration of Habsburg and the great commercial and economic flourishing emporium in Central Europe until the First World War, with the next entry under Italian State; the German, Yugoslavian and Anglo American occupation as a result of the events of the second World war, and then in 1954 the reunion with Italy.