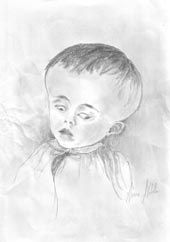 At the end of 07-1918 (with Gropius away on military duty) Werfel visited Alma in Breitenstein and (after a night of lovemaking) she began hemorrhaging. For several days her life was in danger, as well as that of her unborn child. On 02-08-1918 she gave birth to a son, who was baptized with the name Martin Carl Johannes.

Werfel’s play Die Mittagsgöttin, which he called a ‘fairy-tale drama’ (Zauberspiel), reflects traces of his experiences in this early part of his relationship with Alma; the main characters are the ‘earthgoddess’ Mara, who attracts the vagabond Laurentin, transforms his life, and bears his child. The play was originally incorporated into Werfel’s third book of poetry, Der Gerichtstag (Day of Judgment; 1919), which was mostly written in 1916, while he was stationed in Bohemia and Eastern Galicia.

Early on during Alma’s recovery following the birth, Walter Gropius (1883-1969) discovered the ongoing affair between his wife and Franz Werfel. A period of turmoil followed for all concerned. It quickly became evident that Alma was not going to stay in her marriage to Walter Gropius. At first, Gropius very much desired to take custody of their now two-year-old daughter Manon Gropius (1916-1935), but in the face of Alma’s resolute refusal to agree to this, he eventually yielded to her. The divorce of Alma and Walter Gropius became official on 20 October 1920.

The end of the war coincided with the dissolution of the Austro-Hungarian Empire, and early 11-1918, Werfel became swept up in the brief flare of revolutionary activity in Vienna, joining the ‘Red Guard’ that had been founded, on the Bolshevik example, by his friend Egon Erwin Kisch. The signing of the armistice of 11 November, brought, as well, the abdication of Emperor Karl (who had assumed the throne upon the death of Emperor Franz Josef, in 1916), and the next day Kisch’s group, including Werfel, gathered at the Parliament building to make their views known. A commotion ensued in which several people were killed or injured.

Werfel was wanted by the police for questioning, and Gropius helped him avoid coming into difficulties. Alma disapproved of Werfel’s part in these events, and it also went against the grain of opinions that Werfel expressed at other times about the role of the poet in society. (He wrote about this period in his life later in the novel Barbara oder die Frömmigkeit.) The new baby, Martin, appeared to have weathered the difficult birth, but when he was four months old he developed hydrocephalus (‘water on the brain’). Treatment was unsuccessful, and his condition worsened; he died on 15-05-1919.