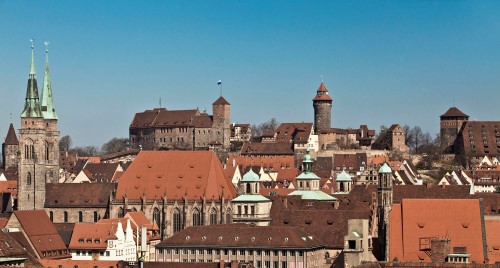 The rule of the Hohenzollerns over the Principality of Kulmbach-Bayreuth ended in 1806 after the defeat of Prussia by Napoleonic France. During the French occupation from 1806 to 1810 Bayreuth was treated as a province of the French Empire and had to pay high war contributions. It was placed under the administration of Comte Camille de Tournon, who wrote a detailed inventory of the former Principality of Bayreuth. On 30 June 1810 the French army handed over the former principality to what was now the Kingdom of Bavaria, which it had bought from Napoleon for 15 million francs. Bayreuth became the capital of the Bavarian district of Mainkreis, which later transferred into Obermainkreis and was finally renamed as the province of Upper Franconia.

As Bavaria was opened up by the railways, the main line from Nuremberg to Hof went past Bayreuth, running via Lichtenfels, Kulmbach and Neuenmarkt-Wirsberg to Hof. Bayreuth was first given a railway connexion in 1853, when the Bayreuth–Neuenmarkt-Wirsberg railway was built at the town’s expense. It was followed in 1863 by the line to Weiden, in 1877 by the railway to Schnabelwaid, in 1896 by the branch line to Warmensteinach, in 1904 by the branch to Hollfeld and in 1909 by the branch via Thurnau to Kulmbach, known as the Thurnauer Bockala (which means something like “Thurnau Goat”).

On 17 April 1870 Richard Wagner (1813-1883) visited Bayreuth, because he had read about the Margrave Opera House, whose great stage seemed fitting for his works. However, the orchestra pit could not accommodate the large number of musicians required, for example, for the Ring of the Nibelung and the ambience of the auditorium seemed inappropriate for his piece. So, he toyed with the idea of building his own festival hall (the Festspielhaus) in Bayreuth. The town supported him in this project and made a piece of land available to him, an undeveloped area outside the town between the railway station and Hohe Warte, the Grüner Hügel (“Green Hill”). At the same time Wagner acquired a property at Hofgarten to build his own house, Wahnfried. On 22 May 1872 the cornerstone for the Festival Hall was laid and, on 13 August 1876, it was officially opened. See Bayreuther Festspiele. Planning and construction were in the hands of the Leipzig architect, Otto Brückwald, who had already made a name for himself in the building of theatres in Leipzig and Altenburg.

In 1886, the composer Franz Liszt (1811-1886) died in Bayreuth while visiting his daughter Cosima Wagner (1837-1930)(Cosima Liszt), Wagner’s widow. Both Liszt and Wagner are buried in Bayreuth; however Wagner did not die there. Rather he died in Venice in 1883, but his family had his body brought to Bayreuth for burial.

The new century also brought several innovations of modern technology: in 1892, the first electric street lights; in 1908 a municipal electricity station, and, in the same year, the first cinema.