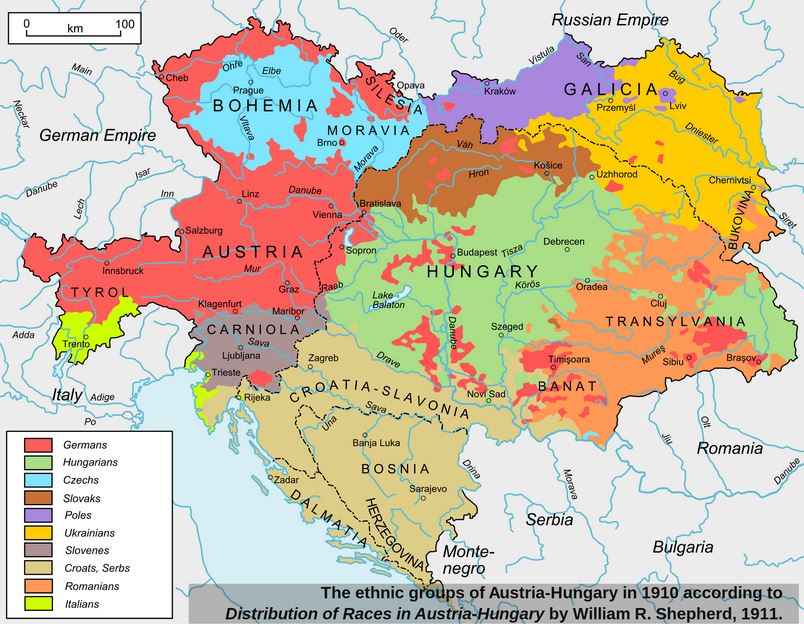 Austria-Hungary, often referred to as the Austro-Hungarian Empire or the Dual Monarchy in English-language sources, was a constitutional union of the Austrian Empire (the Kingdoms and Lands Represented in the Imperial Council, or Cisleithania) and the Kingdom of Hungary (Lands of the Crown of Saint Stephen or Transleithania) that existed from 1867 to 1918, when it collapsed as a result of defeat in World War I.

The union was a result of the Austro-Hungarian Compromise of 1867 and came into existence on 30 March 1867. Austria-Hungary consisted of two monarchies (Austria and Hungary), and one autonomous region the Kingdom of Croatia-Slavonia under the Hungarian crown, which negotiated the Croatian–Hungarian Settlement (Nagodba) in 1868. It was ruled by the House of Habsburg, and constituted the last phase in the constitutional evolution of the Habsburg Monarchy.

Following the 1867 reforms, the Austrian and the Hungarian states were co-equal. Foreign affairs and the military came under joint oversight, but all other governmental faculties were divided between respective states.

Austria-Hungary was a multinational state and one of the world’s great powers at the time. Austria-Hungary was geographically the second-largest country in Europe after the Russian Empire, at 621,538 km2 (239,977 sq mi), and the third-most populous (after Russia and the German Empire). The Empire built up the fourth-largest machine building industry of the world, after the United States, Germany, and the United Kingdom. Austria-Hungary also became the world’s third largest manufacturer and exporter of electric home appliances, electric industrial appliances and power generation apparatus for power plants, after the United States and the German Empire.

After 1878, Bosnia and Herzegovina was under Austro-Hungarian military and civilian rule until it was fully annexed in 1908, provoking the Bosnian crisis among the other powers. SandžakRaška, de jure northern part of the Ottoman Sanjak of Novi Pazar (in modern-day Montenegro and Serbia), was also under de facto joint occupation during that period but the Austro-Hungarian army withdrew as part of their annexation of Bosnia. The annexation of Bosnia also led to Islam being recognized as an official state religion due to Bosnia’s Muslim population.

Austria-Hungary was one of the Central Powers in World War I. It was already effectively dissolved by the time the military authorities signed the armistice of Villa Giusti on 3 November 1918. The Kingdom of Hungary and the First Austrian Republic were treated as its successors de jure, whereas the independence of the West Slavs and South Slavs of the Empire as the First Czechoslovak Republic, the Second Polish Republic and the Kingdom of Yugoslavia, respectively, and most of the territorial demands of the Kingdom of Romania were also recognized by the victorious powers in 1920.