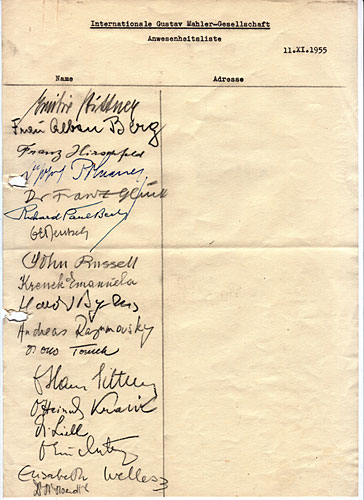 The Society is founded in 1955 at the suggestion of the Vienna Philharmonic Orchestra (VPO).

The archives and library of the International Gustav Mahler Society are among the world’s most important collections of material dealing with the life, works and legacy of Gustav Mahler. In addition to the most important publications about Mahler and his time the library contains conference reports, academic papers and a unique collection of articles from periodicals and newspapers.

Essential elements of the archives are letters from, to and about Mahler, programs, posters, autographs and scores, caricatures, mementos, photos and other graphic materials, and audio and video media. The archives include important sources such as the Stichvorlagen of the Sixth and Ninth Symphonies and the Kindertotenlieder, proofs of the scores of the Second, Third, Fourth and Sixth Symphonies, and orchestra parts containing Mahler’s annotations.

The library and the newspaper collection can be perused on this website; the archives can only be visited on the Society premises. Items from the collections cannot be loaned out.

Principal goals:
Creating a library and archives as a basis for the Critical Edition of the Complete Works similar to the Beethoven-House in Bonn.
Continuing work on the Critical Edition.
Restoration and opening to the public of the memorial sites
“Popularizing” the still little-known composer in concerts and publications.

The first Memorial plaqueon the Trenker-House and the composing hut in Dobbiaco.
The first gold medal awarded to Carl Schuricht for special accomplishments.
The Society already has 210 members.

Publication of the first volume of the Critical Edition of the Complete Works (7th Symphony).
Festivities marking Mahler’s 100th birthday.

Leonard Bernstein records the first complete set of all the symphonies, for which he receives the Gold Medal.

Erwin Ratz dies in Vienna
New President: Gottfried von Einem; Karlheinz Füssl assumes responsibility for the Complete Works, Kurt Blaukopf for the archives.
The Annual Report 1973 states that the goal of making the works of Mahler more widely known has been achieved.

The move to new quarters in the fourth district, Wiedner Gürtel 6

1976
The first issue of the “News about Mahler Research” is published in German and in English (Editors: Kurt Blaukopf and Friedrich C. Heller)

Edward R. Reilly’s book “Gustav Mahler und Guido Adler” is the first volume in the series “Library of the IGMG”.

Joint Sponsorship of the first Gustav Mahler Colloqium in Vienna.

12 volumes of the complete works are available on the 25th anniversary of the society.
Herta Blaukopf presents the correspondence between Mahler and Richard Strauss for the first time.
Herta Blaukopf und Emmy Hauswirth create a photographic exhibition for the Vienna State Opera which is shown in 34 countries (but not in Africa) over the next ten years.

Unveiling of a memorial tablet at the entrance to Mahler’s residence in Wien, 3rd District, Auenbruggergasse 2

After lengthy negotiations and renovations the composing hut in Steinbach am Attersee is opened to the public.

1988
Participation in the Symposium “Gustav Mahler and the Opera” in Budapest.

After the death of Karlheinz Füssl, Reinhold Kubik is named Editor-in-Chief of the Critical Edition of the Complete Works
The composing hut in Dobbiaco is the last of the memorial sites to be opened to the public.

Publication of the Fifteen Songs, Humoresques and Ballads from Des Knaben Wunderhorn, edited by Renate Stark-Voit in collaboration with Thomas Hampson, who supports and advises the Society today as its artistic advisor.

Start of the project to list the contents of the Library and Archives in computer databases.
More emphasis is placed on scholarly joint projects and exhibitions.
Gradual expanding of the “News about Mahler Research” to the status of a scholarly journal (editor: Erich Wolfgang Partsch)

Publication of the collection “Gustav Mahler – Works and Influence” on the 40th anniversary of the Society, Editor: E. W. Partsch)

Cooperation with the Austrian Theater Museum for the exhibition “The Mahler Era. The Management of the Vienna Court Opera from 1897 to 1907” (Concept: E. W. Partsch after an idea by Franz Willnauer)
World premiere of the three-movement original version of “Das klagende Lied” (editor: R. Kubik) in Manchester.
Program “Das klagende Lied” Manchester 1997

First Homepage of the IGMG in the Internet (https://gustav-mahler.org)
Joint sponsorship of the Mahler-Conversations with the University of Klagenfurt (Tagungsband 2002)
Memorial plaque on the “via artis” in Bad Aussee (Styria)

Unveiling of a memorial plaque on the Sanatorium Löw in the ninth district of Vienna, Mariannengasse 20
Various events marking the 50th anniversary of the founding of the Society (Symposium Instruments and Performance Practice in Mahler’s Time, organized by R. Kubik
Concert using Mahler’s Blüthner-Flügel
Exhibition “Mahleriana. The Making of an Icon” in the Jewish Museum, Vienna, Concept: R. Kubik and E. W. Partsch
Permanent Exhibition “Gustav Mahler in Toblach” in the Cultural Center, Grand Hotel Toblach, together with the publication of a book on the subject