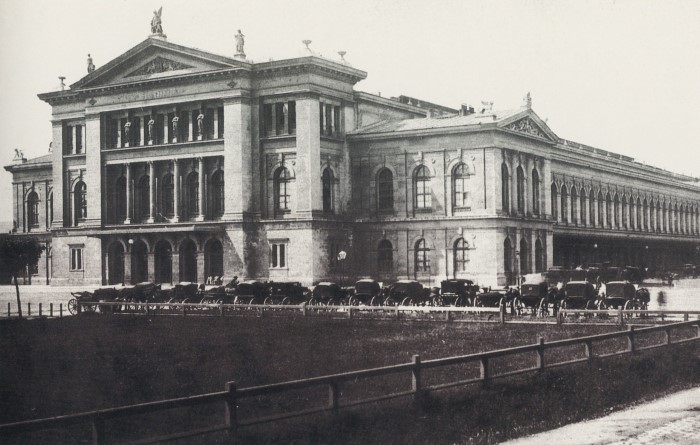 In the course of industrialisation, the need for rail transportation grew, and the Austrian railways passed from private hands into government control. The old Raaber Bahnhof was replaced between 1867 and 1870 by the Centralbahnhof (“central station”), designed by A. Schumann, then in 1910 by the Staatsbahnhof (“State station”) and in 1914, the Ostbahnhof (“eastern station”).

The Gloggnitzer Bahnhof was also re-built to a design by Wilhelm von Flattich in 1874 (too late for the Weltausstellung), when it was renamed Süd-Bahnhof.

Two railway lines were planned, extending from Vienna to the south and east: one to Wiener Neustadt and Gloggnitz, and one via Bruck an der Leitha to Gy?r (German: Raab), with an extension to Uj-Szöny (now a suburb of Komárom) and a branch line to Pozsony (German: Preßburg, now Bratislava). This last branch line was, however, never realised.

Initially, the Hungarian lines carried more freight, and were thought to be the more valuable, with plans being proposed to extend the line to Croatia and the Austro-Hungarian port of Trieste. The route to Gloggnitz was stifled by competition from the canal between Vienna and Wiener Neustadt, but benefited from passenger transport to tourist destinations such as Mödling, Gumpoldskirchen, Baden and Bad Vöslau, making it the first Austrian railway to target passenger traffic directly.

According to Matthias Schönerer, who was involved in every major Austrian railway project at the time, rather than a single station, it would be most sensible to build two termini at an obtuse angle to each other. The locomotive factory and other works were to be placed in the space between the two.

The passenger station was built in a classical style, as was usual for public buildings around 1840. The entrance and exit were through the front of the building, which faced the location of the modern Schweizergarten, the station being considerably closer to Südtiroler Platz then than it is now.

The entrance hall was connected to the concourse on the first floor (AmE: second floor) by a staircase. The concourse was the first in Austria, comprised four platforms, large bow windows and was covered by a sturdy 23-metre wide construction of wooden beams held together by iron bands. A house between the two stations served as a restaurant, and was the only building to survive the re-building works on the following 110 years, although the two stations later received separate culinary facilities.

During the boom of the Gründerzeit, a new and larger Südbahnhof was planned by Wilhelm von Flattich, and building was completed in 1874. Including the peripheral wings, the new station was about three times wider than the old one, and the hall was broadened to 35.7 metres (the second largest in Vienna), which was enough for five (later six) platforms. Further platforms for local trains were built to the south of the main hall. The Südbahnhof remained largely unchanged from 1874 to 1945. It served the lines south to Ljubljana, Trieste, Maribor, Carinthia, East Tyrol, South Tyrol and Zagreb. Until 1914, the CIWL express from St Petersburg to Cannes stopped there; a remnant of this line, the Vienna-Cannes express continued to travel to and from the Südbahnhof until 1939.