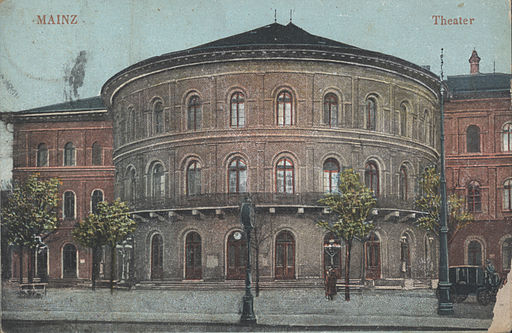 The Staatstheater Mainz (Mainz State Theatre) is a theatre in Mainz, Germany, which is owned and operated by the state of Rhineland-Palatinate. Situated on the Gutenbergplatz, the complex comprises two theatres which are connected by an underground passage and also by skywalk. Performances of opera, drama and ballet are presented.

Before the Staatstheater Mainz was constructed, there existed the theatre “Komödienhaus”. The Stadttheater’s great hall (“Großes Haus”)) was built in 1829-33 by Georg Moller with seating for 1,500. It was inaugurated on 21 September 1833 with Weber’s “Jubelouverture” and Mozart’s La clemenza di Tito”. In 1863, Josef Laske repaired the ducal proscenium boxes.

In 1876, the auditorium and the foyer were extended by Eduard Kreyßig. In 1898-99, renovations were carried out by Ferdinand Fellner & Hermann Helmer, which involved creation of additional storage space, alterations to the roof, fixing an iron curtain, and improvements to the heating system. When it reopened on 18 September 1899, Gounod’s Faust was premiered.

The construction had been requested by the bourgeoisie of the city of Mainz for decades and cost 280,000 guilders (the city’s budget amounted to 300,000 guilders at that time). The theatre’s great hall (Großes Haus) was destroyed by bombing during World War II.