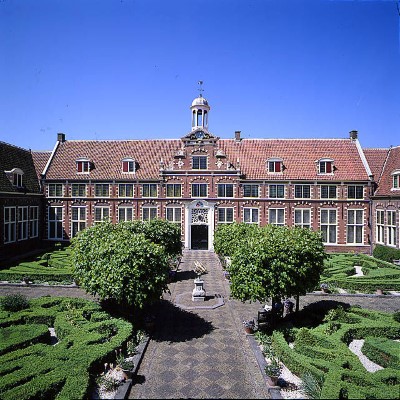 The Frans Hals Museum is a hofje that is home to the municipal museum in Haarlem, Netherlands, that was established in 1862. In 1950, the museum was split in two locations when the collection of modern art was moved to the Museum De Hallen. The main collection, including its famous 17th-century Frans Hals paintings, for which the museum is named, is located in the former Oude Mannenhuis on the Groot Heiligland.

The museum was originally founded in 1862 in the newly renovated former Dominican church cloisters located in the back of the Haarlem city hall known as the Prinsenhof, and when it needed more space, it moved to the recently vacated location of the town orphanage in 1913. The collection is based on the large number of paintings owned by the City of Haarlem, which includes over 100 artworks seized from Catholic churches in the 1580s after the Protestant Reformation, but also interesting Haarlem art rescued from demolished local buildings from the 15th century onwards.