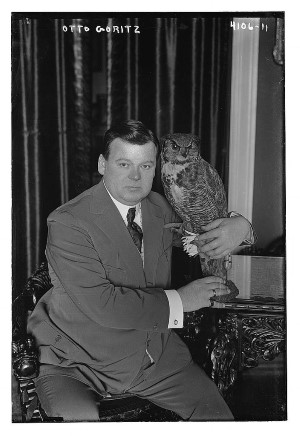 Otto Goritz was a baritone with the Metropolitan Opera from 1903 to 1917. He then sang for the Hamburg State Opera.

Beginning in 1903, he was a great star at the Met, especially successful in Wagner roles. In his 14 seasons there, he appeared over 400 times in 23 different roles, including in the premiere of Humperdinck’s Konigskinder.

In the 1910s, Goritz sang works by Mozart, Wagner, and others on a number of 78 rpm recordings for Columbia Records, Edison Records, Victor and Victrola Records (two imprints of the Victor Talking Machine Company), and other companies.

German baritone Otto Goritz created the key role of the Fiddler in the acclaimed world premiere of Königskinder at the Met on December 28, 1910. The composer was in attendance, with a cast led by Geraldine Farrar, Hermann Jadlowker and Goritz. In its rave review, the New York Times praised the humor and spirit of the baritone’s portrayal, in a role “admirably suited to him.”

After the USA entered World War I, he departed under a cloud, having been rumoured to have sung a parody celebrating the sinking of the RMS Lusitania at a party hosted by Johanna Gadski on New Year’s Eve, 1916.

He returned to Germany, and sang with the Hamburg State Opera for a number of years.