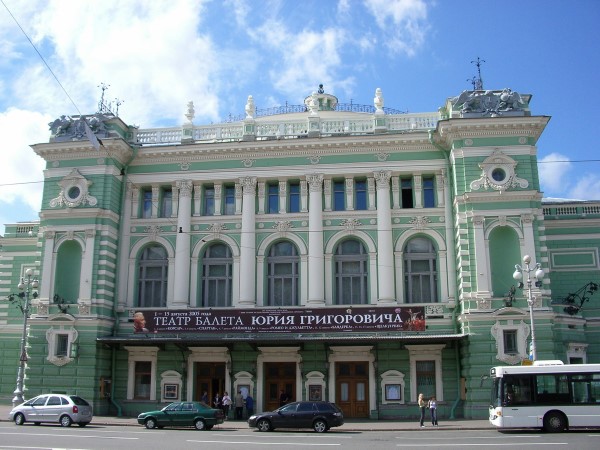 The Mariinsky Theater (Maryinsky, Mariyinsky) is a historic theater of opera and ballet in St Petersburg, Russia. Opened in 1860, it became the preeminent music theatre of late 19th century Russia, where many of the stage masterpieces of Tchaikovsky, Mussorgsky, and Rimsky-Korsakov received their premieres. Through most of the Soviet era, it was known as the Kirov Theatre. Today, the Mariinsky Theatre is home to the Mariinsky Ballet, Mariinsky Opera and St Petersburg Mariinsky Orchestra.

The Imperial drama, opera and ballet troupe in St Petersburg was established in 1783, at the behest of Catherine the Great, although an Italian ballet troupe had performed at the Russian court since the early 18th century. Originally, the ballet and opera performances were given in the wooden Karl Knipper Theatre on Tsaritsa Meadow, near the present-day Tripartite Bridge (also known as the Little Theatre or the Maly Theatre). The Hermitage Theatre, next door to the Winter Palace, was used to host performances for an elite audience of aristocratic guests invited by the Empress.

A permanent theatre building for the new company of opera and ballet artists was designed by Antonio Rinaldi and opened in 1783. Known as the Imperial Bolshoi Kamenny Theatre the structure was situated on Carousel Square, which was renamed Theatre Square in honour of the building.

Both names – “Kamenny” (Russian word for “stone”) and “Bolshoi” (Russian word for “big”) – were coined to distinguish it from the wooden Little Theatre. In 1836, the Bolshoi Kamenny Theatre was renovated to a design by Albert Cavos (son of Catterino Cavos, an opera composer), and served as the principal theatre of the Imperial Ballet and opera. 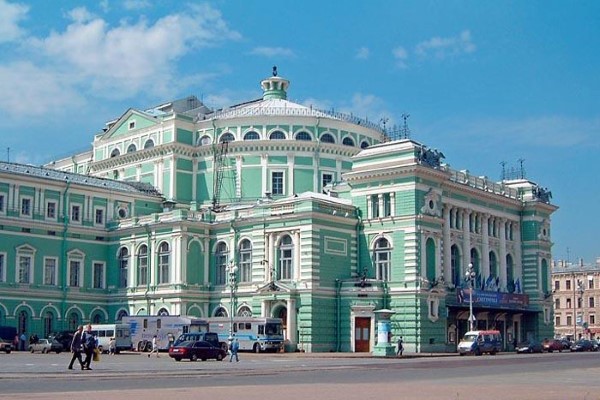 On 29 January 1849, the Equestrian circus (?????? ????) opened on Theatre Square. This was also the work of the architect Cavos. The building was designed to double as a theatre. It was a wooden structure in the then-fashionable neo-Byzantine style. Ten years later, when this circus burnt down, Albert Cavos rebuilt it as an opera and ballet house with the largest stage in the world.

With a seating capacity of 1,625 and a U-shaped Italian-style auditorium, the theatre opened on 2 October 1860 with a performance of A Life for the Tsar. The new theatre was named Mariinsky after its imperial patroness, Empress Maria Alexandrovna.

The Imperial Mariinsky Theatre and its predecessor, the Bolshoi Kamenny Theatre, hosted the premieres of many of the operas of Mikhail Glinka, Modest Mussorgsky, and Pyotr Ilyich Tchaikovsky. At the behest of the theatre director Ivan Vsevolozhsky, both the Imperial Ballet (ballet arrived at the Mariinsky theater in 1870) and the Imperial Opera were relocated to the Mariinsky Theatre in 1886, as the Bolshoi Kamenny Theatre was considered unsafe.

It was there that the renowned choreographer Marius Petipa presented many of his masterpieces, including such staples of the ballet repertory as The Sleeping Beauty in 1890, The Nutcracker in 1892, Raymonda in 1898, and the definitive revival of Swan Lake (with Lev Ivanov) in 1895. 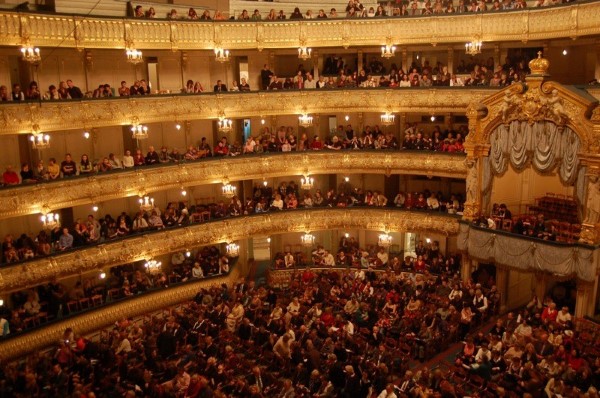 When the theatre was designated as principal venue of the Imperial Ballet and Opera in 1886, the theatre was extensively renovated. A lavish inauguration celebration was given at the behest of Emperor Alexander III, in which the first original ballet to be produced at the Mariinsky was given—Petipa’s Les Pilules magiques, to the music of Ludwig Minkus.

Other world premieres given at the house included Mussorgsky’s opera Boris Godunov in 1874, Tchaikovsky’s operas The Queen of Spades in 1890 and Iolanta in 1892, the revised version of Prokofiev’s ballet Romeo and Juliet in 1940, and Khachaturian’s ballet Spartacus in 1956. Other notable productions included Rimsky-Korsakov’s opera The Golden Cockerel in 1909 and Prokofiev’s ballet Cinderella in 1946 (with Natalya Dudinskaya).