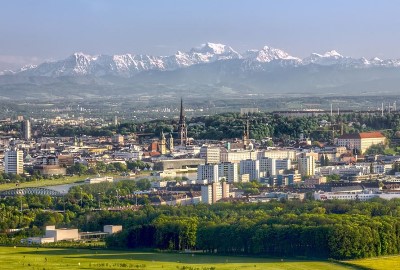 The city was founded by the Romans, who called it Lentia. The name Linz was first recorded in AD 799.

It was a provincial and local government city of the Holy Roman Empire, and an important trading point connecting several routes, on either side of the River Danube from the east to the west and Bohemia and Poland from north to the Balkans and Italy to the south. Being the city where the Habsburg Emperor Friedrich III spent his last years, it was, for a short period of time, the most important city in the empire. It lost its status to Vienna and Prague after the death of the Emperor in 1493.

One important inhabitant of the city was Johannes Kepler, who spent several years of his life in the city teaching mathematics. He discovered, on 15 May 1618, the distance-cubed-over-time-squared — or ‘third’ — law of planetary motion. The local public university, Johannes Kepler University, is named after him.

Another famous citizen was Anton Bruckner (1824-1896), who spent the years between 1855 and 1868 working as a local composer and organist in the Old Cathedral, Linz. The Brucknerhaus is named after him. Adolf Hitler was born in the border town of Braunau am Inn but moved to Linz in his childhood.

The Brucknerhaus, a famous concert hall in Linz is named after Anton Bruckner (1824-1896). It is situated just some 200 metres away from the “Lentos”. It is home to the “Bruckner Orchestra”, and is frequently used for concerts, as well as balls and other events. It is also the venue of the “Linz Fest” which takes place annually in May as well as one of the venues during the Ars Electronica Festival in early September. In June, July and August the “Musikpavillon” is placed in the park where musical groups of different styles perform on Thursdays, Fridays, Saturdays and Sundays free of charge.

The Musiktheater (music theatre) was opened in April 2013 and is considered to be one of the most modern opera houses in Europe. It offers five stages of varying sizes; the big hall (“Großer Saal”) with 1,200 seats, the BlackBox with up to 270 seats, the BlackBoxLounge with up to 150 seats, the orchestra hall (“Orchestersaal”) with up to 200 seats and another stage in the foyer (“FoyerBühne”). Performances at the Musiktheater include operas and typically Austrian operettas, ballets and musicals.

The Kapu is a venue for various contemporary music styles, such as hip hop, noise rock and crust and also houses a cinema and a recording studio.

The Posthof is one of the biggest event centres in Linz with three rooms offering up to 630 seats or standing room for about 1,200 people respectively in the big hall. The programme focuses on contemporary art and covers concerts, theatre, cabaret, dance and literature. Artists from Linz are regularly invited in order to improve the local cultural scene; e.g. bands from Linz get the opportunity to play as pre-bands alongside nationally and internationally known artists. Altogether a total of about 250 events take place at the Posthof each year with a total number of visitors of about 80.000.

The Stadtwerkstatt is an independent association for culture and was founded in 1979. Its headquarters is located in the Urfahr district on the north bank of the Danube close to the Ars Electronica Centre and serves as venue for music events and other artistic and cultural activities. Situated at the same address is the Stadtwerkstatt’s own Café Strom, a café/bar popular amongst young adults.

Wolfgang Amadeus Mozart wrote his Symphony No. 36 (1783) in Linz for a concert to be given there, and the work is known today as the Linz Symphony. He reportedly also composed his Piano Sonata 13 in B flat while in Linz, although it was published in Vienna. The first version of Anton Bruckner’s Symphony No. 1 in C minor is known as the Linz version.

Anton Bruckner was born in Ansfelden near Linz and spent several years working as a conductor and organist in Linz, where he also started to compose. The first version of Anton Bruckner’s Symphony No. 1 in C minor is known as the Linz version. The Brucknerhaus, a concert hall in Linz as well as its annual international Brucknerfest are named after him.