Abbazia (Opatija, Opatje, Sankt Jakobi) is a town in Primorje-Gorski Kotar County in western Croatia. The traditional seaside resort on the Kvarner Gulf is known for its Mediterranean climate and its historic buildings reminiscent of the Austrian Riviera.

Opatija is located 18 km (11 mi) southwest of the regional capital Rijeka, about 90 km (56 mi) from Trieste by rail and 82 km (51 mi) from Pula by road. The city is geographically on the Istrian peninsula, though not in Istria County. The tourist resort is situated on the Kvarner Gulf, part of the Adriatic coast, in a sheltered position at the foot of U?ka massif, with the Vojak peak reaching at a height of 1,401 m (4,596 ft).

The town is a popular summer and winter resort, with average temperatures of 10 °C in winter, and 32 °C in summer. Opatija is surrounded by beautiful woods of bay laurel. The whole sea-coast to the north and south of Opatija is rocky and picturesque, and contains several smaller winter resorts.

The town’s modern history began in 1844, when Iginio Scarpa (1794-1866), a wealthy merchant from Rijeka, had the Villa Angiolina manor built in an extended park, were he received notable guests such as Ban Josip Jela?i?. In 1873 the Austrian Southern Railway company from Vienna opened the branch line from Pivka to Rijeka via nearby Matulji and thus opened the path for the development of tourism in Opatija and neighbouring Lovran.

In 1882, the railway company purchased the Villa Angiolina, where it accommodated the crown prince couple Rudolf and Stéphanie. At the time, Friedrich Julius Schüler (1832–1894), the Managing Director of the Southern Railways, started the construction of the Hotel Quarnero (Kvarner Hotel) and the Hotel Kronprinzessin Stephanie (present-day Hotel Imperial), and also was responsible for the unique lungomare and parks (the Company engaged Carl Schubert, director of the Viennese Emperial-Royal Society for the construction of parks). The Villa Angiolina was later run by the Compagnie Internationale des Wagons-Lits. In the Angiolina Park today stands Schüler’s bust, a work of the sculptor Hans Rathausky. 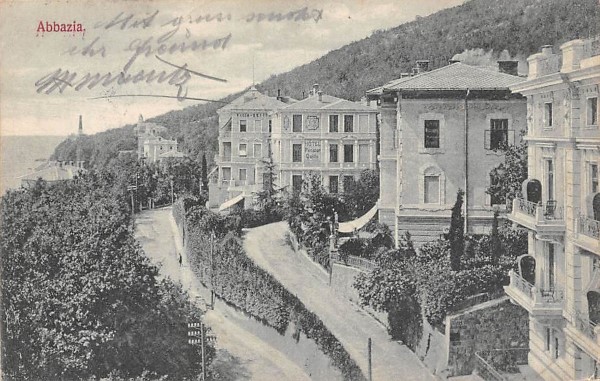 In 1887, Heinrich von Littrow established the “Union Yacht Club Quarnero” in Opatija (founded in June/July 1886) – the first sailing club on the Adriatic coast. In 1889 the Cisleithanian government officially declared Abbazia (Opatija) the first climatic seaside resort (Seebad) on the Austrian Riviera, rivalled by Brioni, Duino, Grado, and Portorož. After the hotels, the building of villas started, for the needs of more demanding noble guests.

The first Villa Amalia, in the immediate vicinity of the Hotel Quarnero, was built in 1890 as the hotel’s annex. Opatija’s first guide was published in 1883 in Vienna with the title Abbazia, Idylle von der Adria. The same year saw the publication of Abbazia und seine Umgebung by Heinrich Noe, who in 1884 published his Tagebuch aus Abbazia (Diary from Opatija). Joseph Rable printed Curort und Seebad Abbazia (Spa and the bathing beach in Opatija), and Peter von Radics wrote a guidebook simply titled Abbazia. 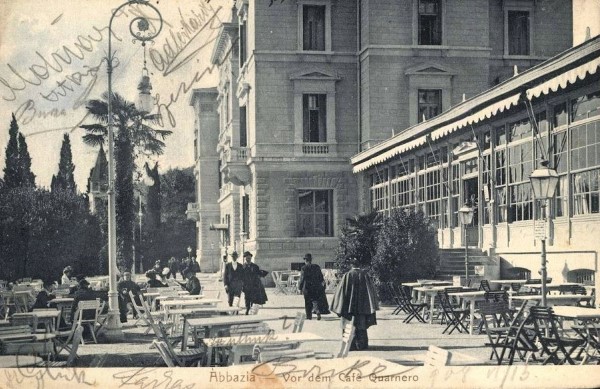 In 1908 a tramway line was opened, running from Matulji station along the coast via Opatija down to Lovran in the south. Opatija is best known nowadays as the venue for a chess tournament devoted to the King’s Gambit in 1912. The Austrian emperor Franz Joseph I used to spend several months here during the winter. Here he met with the German emperor Wilhelm II on 29 March 1894; other crowned heads seeking relaxation included Empress Elisabeth of Austria and the German empress Augusta Victoria, King Carol I of Romania and his consort Elisabeth, King George I of Greece, King Albert of Saxony, Grand Duke William IV of Luxembourg, and Prince Nikola I Petrovi?-Njegoš. Many of the late 19th-century luxury hotels and villas have survived to present times. 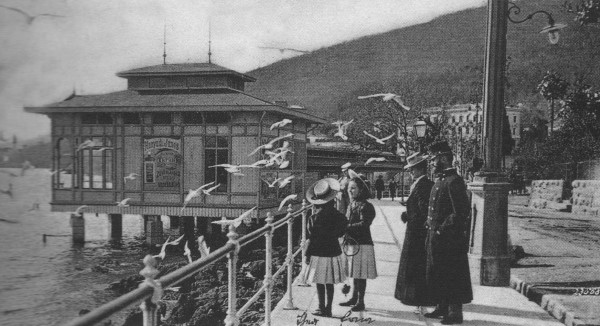