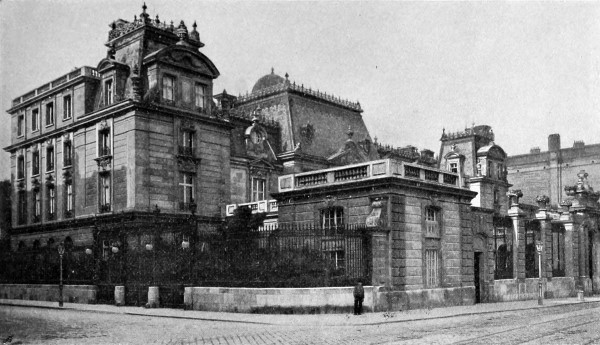 Albert Salomon von Rothchild (1844-1911) lived in Vienna in Palais (House) Rothchild (House Rothchild – Heugasse 24-26). The Palais was a palatial house in Vienna, one of five Palais Rothschild in the city owned by members of the Rothschild family. Heugasse 26, today Prinz-Eugen-Strasse 20-22, in the IVth (Wieden) district of Vienna. Commissioned by Albert von Rothschild, was designed and built by the French architect Hippolyte Destailleur (1822-1893) between 1876 and 1884, demolished in 1954.

The Palais Albert Rothschild was a palatial house in Vienna, one of five Palais Rothschild in the city owned by members of the Rothschild family. It was located at Heugasse 26 (today Prinz-Eugen-Strasse 20-22), in the IVth (Wieden) district of Vienna. Commissioned by Albert von Rothschild, it was designed and built by the French architect Gabriel-Hippolyte Destailleur between 1876 and 1884, and demolished in 1954.

The building was unusual for Vienna. Designed in the French Neo-Renaissance “hôtel particulier” style, the layout was U-shaped, three storeys high and set back from the street by a courtyard, with the estate fenced off by a high iron grill. Attached to the palace was a garden which bordered on Plösslgasse.

The entrance hall to the palace was dominated by an enormous marble staircase, the walls decorated with priceless gobelins, mirrors and paintings. The ballroom and various salons had ceilings painted by Jean de Witt and Tiepolo, and were richly decorated with stucco, gold leaf, and heavy hanging crystal chandeliers. The ornate parquet floors were made with expensive rare woods; the furniture was in the style of Louis-Seize.

A special feature was a large orchestrion, built into a niche between the ballroom and one of the salons; together with a smaller orchestrion, these two instruments could replace an entire orchestra. In addition to being a private residence Albert used it to conduct his banking business.

An unusual element of the building was the private observatory, located in the middle projection at the highest point of the palace, reached by a small wooden staircase beginning from the second floor, and fitted with numerous telescopes for viewing the stars.

After the annexation of Austria by Nazi Germany, the Rothschild family was forced to flee and went into exile. The art collections of the family in Vienna were seized and removed.

Adolf Eichmann moved into the Palais Albert Rothschild and set up the infamous Central Agency for Jewish Emigration in Vienna, the purpose of which was to organise the ‘emigration’ of Jews from Austria. Albert was forced to sign a document giving his consent to the art collections’ confiscation, plus the appropriation of all Rothschild assets in Austria by the German Government, in exchange for safe passage for himself and his brother Louis (1882-1955) out of Austria.

The Palais Albert Rothschild was slightly damaged during the war. Returning to Vienna in 1947, Louis found the building still standing and functional, but in a state of total neglect, its interior largely plundered. In following years Louis, in face of stiff government opposition tried to obtain compensation for his family’s losses from the Austrian government, eventually only receiving a small amount of compensation. He gave the palace, the gardens and the estate to the Austrian Government, on condition that a pension fund for former Rothschild employees be created with the proceeds.

In 1954 the Palais was torn down. Anything of value still left, such as chandeliers, woodwork and fireplaces, were auctioned at below their true value. The stairs and pillars of marble were sold; the rest of the stone-work was simply destroyed, the ornate iron fence and window grillwork sold for scrap. The large orchestrion was partly destroyed, though parts of it can be seen in the Collection of Ancient Musical Instruments of the Kunsthistorisches Museum. The smaller orchestrion was also lost.

The building itself was made out of such sturdy materials and sound construction that dynamite had to be used to bring it down.

The property at 28 Heugasse (today Prinz-Eugen-Strasse 26), was built for Albert von Rothschild by the architects Ferdinand Fellner and Hermann Helmer in 1894. Its position next door to Albert’s main residence suggests that it was intended as an annexe to his house at 24-26 Heugasse.

Many of its architectural features recalled the Austrian Baroque, the vast Iconic pilasters, for example, and the Atlases framing a monumental door, and it owed much to Viennese palaces of the 17th century. The house is now the Brazilian embassy.