Martin Campbell-White is widely regarded as one of the most experienced and admired artists managers of our generation. Having begun his career at Ibbs & Tillett in 1969, Martin moved to Harold Holt in 1972 and later negotiated the merger of that company with Lies Askonas, to form Askonas Holt. 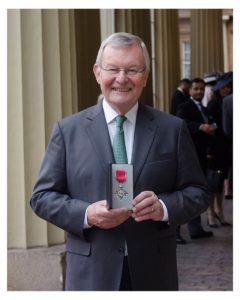 Martin has overseen the careers of major artists such as Sir Simon Rattle, Robert Tear, Claudio Abbado, Daniel Harding and Bernard Haitink, as well as taking a leading role in arranging major international tours. Martin retired as Joint Chief Executive of Askonas Holt and became a Consultant to the firm in January 2014, advising and consulting its staff and artists. Martin is an Honorary Member of the Royal Philharmonic Society and acts as consultant for the Opera Comique in Paris.

Photo: Martin Campbell-White at Buckingham Palace collecting his MBE for services to the music industry (2015).