Max Graf was an Austrian music critic, born in Vienna. Max Graf studied with Eduard Hanslick, Anton Bruckner and Guido Adler. In 1902 he became professor at the Imperial Academy of Music and Performing Arts in Vienna (until 1914). Between the World Wars, he was one of the most famous music critic. After the “Anschluss” he emigrated in 1938 to New York, in 1947, he returned.

He is also notable for his role in the history of psychoanalysis as the father of Little Hans. Graf’s book Composer and Critic is noted for its amicable style with M. A. Schubart of the New York Times stating, “Dr. Graf has written a charming, comprehensive, intelligent treatise on music criticism, drawing generously on his own large supply of knowledge and experience…. The only major issue which I cannot reach agreement with Dr. Graf is his manner. He is much too polite. No subject in the world deserves more rudeness than music criticism.” In the introduction to this book, Graf details his original interest in music criticism as having stemmed from attending the lectures of Anton Bruckner in Vienna. Max Graf, a composer and music critic, the father of “Little Hans,” was born October 1, 1873, in Vienna, where he died on June 24, 1958.

The son of Joseph Graf, a Jewish writer and editor, he was educated in Vienna and Prague. After 1891 he studied at the law school of the University of Vienna but devoted most of his time to music and it was his intention to become a composer, according to Louis Rose (1986). He finished his legal studies in 1896 but devoted much of his time to music composition and criticism, and regularly took part in meetings of the literary group Jung-Wien. From 1902 to 1938 he taught the history of music and musical aesthetics at the Vienna Academy of Music, where he was appointed professor in 1909.

Graf met Sigmund Freud in 1900 and his wife, Olga Graf (born Olga Hoenig), from whom he separated a few years later, was probably a patient of Freud’s. Within the psychoanalytic movement he is known for being the father of “Little Hans,” Herbert Graf, who was born in 1903. It was Max who supplied Freud with the material for his paper “The Analysis of a Phobia in a Five-Year Old Boy” (1909b). 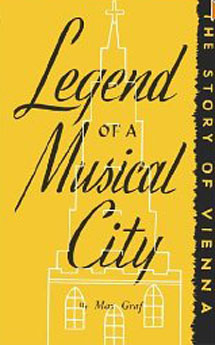 At the end of 1904, he took part in sessions of the Wednesday Psychoanalytic Society and, in December 1907, wrote an essay entitled “Methodik der Dichterpsychologie” (Methodology of the Psychology of the Poet). In early 1906 Freud wrote a short text on a somewhat unexpected topic, “Psycopathische Personen auf der Bühne” (Psychopathic Characters on the Stage). The text was never published in German, but Graf, to whom Freud had given the manuscript, kept it and had an English translation published (1942a [1905-1906]).

Graf emigrated to the United States in 1938 and taught until 1947 at the New School for Social Research in New York, where, in 1940, he created the first seminars in music criticism. He was a guest professor at the Carnegie Institute of Technology in Pittsburgh and at Temple University in Philadelphia. In 1947 he returned to Austria and taught music criticism at the Mozarteum in Salzburg and elsewhere. In 1953 his autobiography, Jede Stunde war erfüllt: Ein halbes Jahrhundert Musik- und Theaterleben (Every Minute Filled: A Half-Century in Music and Theater), was published in Vienna, where he died in 1958.