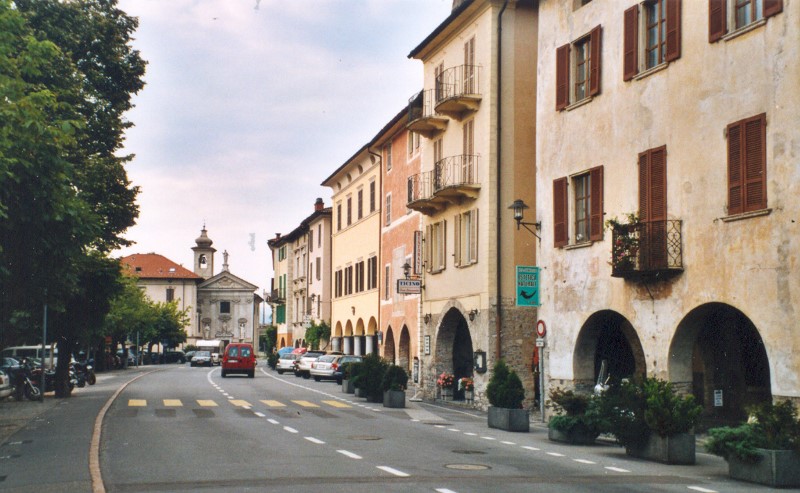 Bissone is first mentioned in 735 and again in 854 as Blixuni. In German it was known as Byssen, though that name is no longer used.

In the 8th Century it was home to a Lombard garrison and supported the fortresses in Campione d’Italia, Arogno and Brusino Arsizio. Starting in the 9th Century, the monastery of S. Ambrogio in Milan owned property in Bissone. The parish church of St. Carpoforo, became partly independent in 1474 from the mother church at Riva San Vitale. It became fully independent in 1622, but retained a relationship with the monastery of San Pietro in Ciel d’Oro in Pavia. The Oratory of St. Rocco was built around 1630.

During the Middle Ages, at the site of today’s Casa Tencalla, there was a castle. The castle is first mentioned in 1054. On the mountain side surrounded by fortified walls, were the entrance gates to the village. Bissone was the center of the Ghibellines’ resistance during the dispute between Milan and Como (1118-1127). Following the French invasion in 1798 and the end of the Old Swiss Confederacy, it became a stronghold of supporters of the Cisalpine Republic. However, on 3 March 1798 it was taken over by Pro-Swiss forces from Lugano.

Bissone was the birthplace of the architect Francesco Borromini and home of numerous construction and architecture dynasties such as the Maderno, Gaggini, Tencalla and Garovaglio families. The local economy always relied primarily on fishing and the fish trade. Under the Old Swiss Confederacy, Bissone, Morcote and Melide had a monopoly on selling fish in Lugano. Another source of income was providing ferries across the lake. During the 14th to 17th Centuries a number of large houses with impressive arcades were built for the local merchants. Later, emigration together with wine, olive and hemp cultivation became the major sources of income. With the construction of the Melide causeway, carrying the road (1847) and railway (1874) from Melide, Bissone lost its traditional trade income. Bissone is part of the tourist region on Lake Lugano.