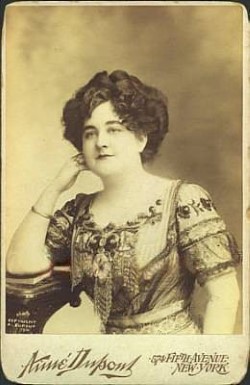 Bernice W. James De Pasquali was born in Boston and is a member of the Daughters of the American Revolution. Practically all of her musical training was received in New York City where she became a pupil of Oscar Saenger. She made her debut in Milan (1900) as Gilda in ‘’Rigoletto’’. She married Italian tenor Pietro de Pasquali who put together his own opera troupe, which included his wife as principal soprano. They toured the United States. Her Metropolitan Opera debut (1909) came when she replaced an ill Marcella Sembrich as Susanna in a performance of ‘’Le Nozze di Figaro’’.

She remained at that House until 1917 as a principal coloratura soprano. For a performance of ‘’Aida’’ (15 Jan 1910) she appeared as the Priestess under the pseudonym of Emma Laurier, a practice that singers applied when they chose not to have a billing. She sang for the Prince of Wales in Quebec in 1908, and appeared at the 1916 Pan American Exposition in San Diego. Her successes, however, are not limited to America as she has appeared in Mexico, Cuba, South Africa and Europe, in many places receiving great ovations. Her voice is a clear, high, flexible soprano, equally fine for concert or opera.

Her husband, Signor Pasquali, made a lifetime study of the principles of the “Bel Canto” school of singing, and the following conference is the result of long experiment and study in the esthetic, philosophical and physiological factors in the most significant of the so-called methods of voice training. While working the Orpheum vaudville circuit in Omaha, Nebraska, she developed double pneumonia and died there 2 weeks later.

Opera Singer. She trained in New York and Italy, where she met her future husband, the tenor Salvatori De Pasquali. She made her debut in Milan (1900) as Gilda in “Rigoletto.” In America, she debuted at the Metropolitan Opera House in “Traviata” (1908), with 26 curtain calls; eventually she would appear in 15 different roles at the Met including Carmen, La Boheme, etc. She was said to have a repertoire of 54 operas, any one of which could be sung at a few hours notice. She sang for the Prince of Wales in Quebec in 1908, and her appearance at the 1916 Pan American Exposition in San Diego was said to have “…left her audience gasping.”

Aside from her accomplishments as a coloratura soprano, she was also considered a world-class pianist. She was, she often returned to the small seaside town of her birth and on Christmas Eve would sing “Silent Night” in front of the Public Library. Later her husband formed an opera company with his wife as the star and principal singer. After his sudden death from a stroke in 1923, Bernice continued to tour on her own. While working the Orpheum vaudville circuit in Omaha, Nebraska, she developed double pneumonia and died there 2 weeks later. She and her husband are buried in the James’ family plot on a gentle hillside which faces Hingham Bay.