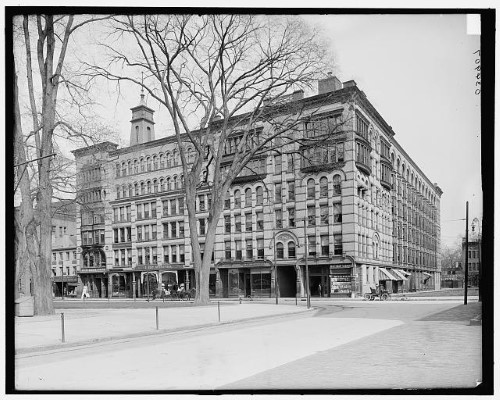 The Court Square Theater opened on 21-09-1892 and was closed/demolished in 1956. Located at Court Square directly across from City Hall, this ornate palace presented live theater-movie combos right up to its closing in 1956. For a brief period of time under the management of E.M. Loew’s Theatres, it exhibited grade B movies without live stage shows.

The building directly in front opened as a hotel in 1891. Later converted to offices, it now has been renovated back to an exclusive hotel scheduled to open simultaneously with the new convention center. Directly behind, where the theater once stood, is a parking lot. Interestingly, to gain access to the parking lot, one must drive through what was once the Court Square’s lobby.

The MGM Theatre Photograph and Report form for the Court Square Theatre in Springfield has a facade photo taken in May 1941. There was a rectangular multi-bulbed movie marquee with the E.M. Loew logos on either side of the name on the front. A card with something about “Vaudeville” is posted above one of the double entrance doors. The address is listed as “Elm Square” and the person who did the Report wrote “2 doors off Main St.” on it.

The Report states that the Court Square is not a MGM customer, that the theatre is over 15 years old; that it’s in Fair condition; and has 700 seats on the main floor and 398 in the balcony, total: 1,098 seats. (Since it was an old 19th-century legiter,it may have had 2 balconies). It was a live road-show house in Springfield for many years.

The Court Square Theatre is listed in the 1897-1898 edition of Julius Cahn’s Official Theatrical Guide, an annual publication for roadshow producers and stage managers. The seating capacity is given as 1,865. Ticket prices were 25 cents to $1. The theatre was on the ground floor. The building was served by both gas lighting and electricity. The proscenium opening was 35 feet wide, and the stage was 50 feet deep. Nearby hotels were: Gilmore, Haynes, Cooley, City, and Mansion Hotel. The 1897 population of Springfield was 50,000.

The Court Square Theatre was one of 9 downtown Springfield theaters on a long list of theaters and halls in MA which received state licenses during the 12 months ending 31-10-1914. The others were the Bijou, Broadway, Gilmore, Globe, Hudson, Nelson, Plaza, and Poli-Palace.

Court Square is a park and historic district in the heart of Springfield’s urban Metro Center neighborhood. Court Square is the City of Springfield’s only topographical constant since its founding in 1636. It is bounded by Court Street, Main Street, State Street, East Columbus Avenue, and features Elm Street and a scenic pedestrian-only walkway from the courthouse toward Springfield’s historic Old First Church. 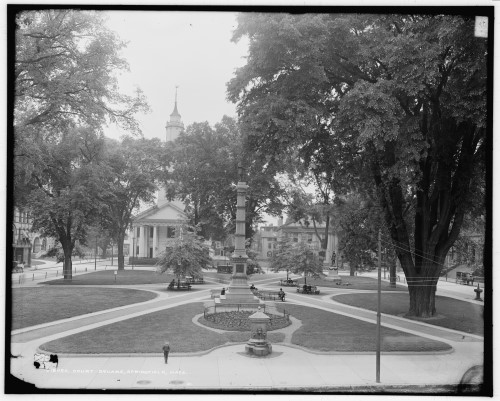 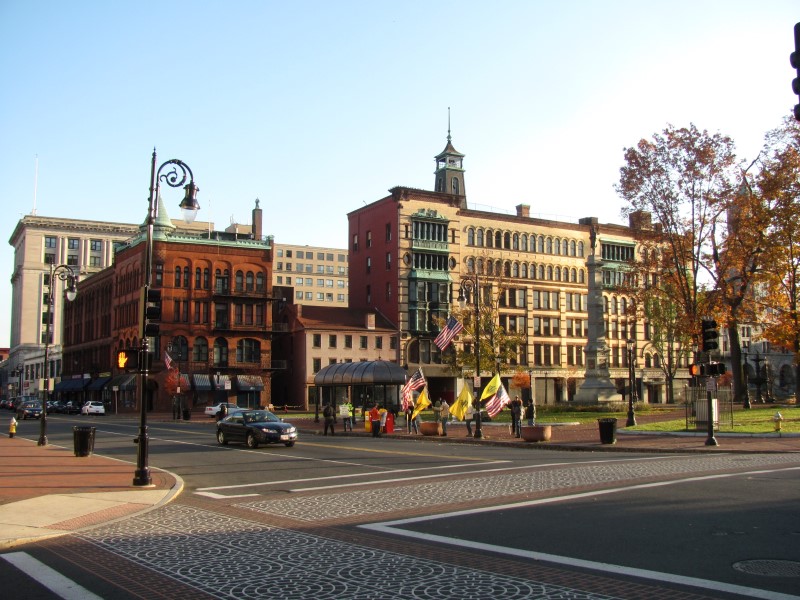