One of the first independent theatre buildings in Slovenia appeared in the second half of the 18th century on the eastern edge of the present day square named Kongresni trg in Ljubljana. In the 17th century a provincial riding centre was built on this spot, which also appears on Valvasor’s depictions of Ljubljana and Florjan?i?’s map from 1744. 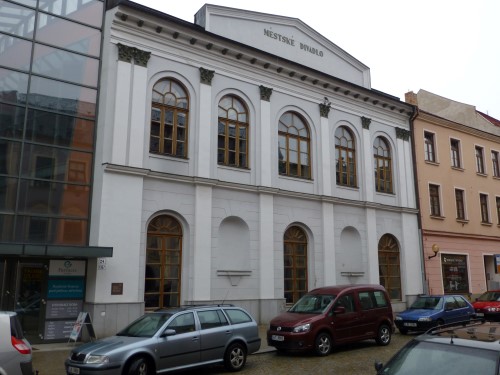 The riding centre was built in the vicinity of the palace belonging to the deputy provincial duke in front of a gate on the other side of the northern part of the moat and defence wall protecting Ljubljana. It was a low, square, 3 x 5 axial building, with a ridged roof. A similarly designed centre has been preserved within the extensive castle complex in Slovenska Bistrica. 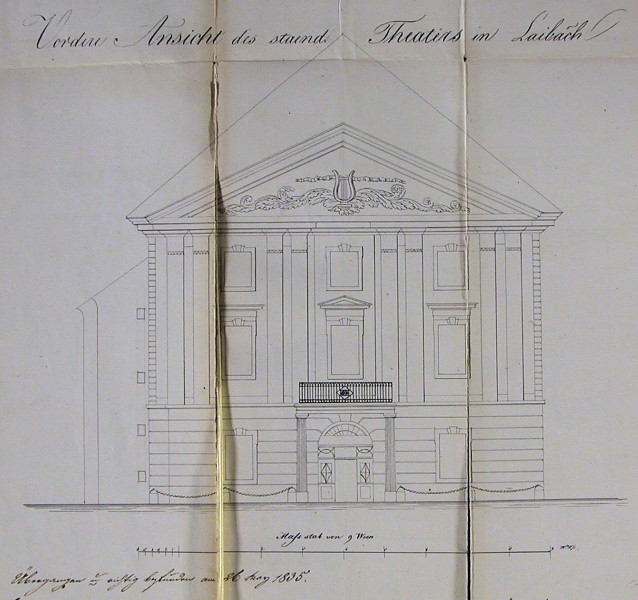 Prior to the second half of the 18th century, Ljubljana had no independent theatre building. The performances of travelling theatre groups were staged primarily in the halls of larger palaces and mansions belonging to the aristocracy, and in monasteries. During the 18th century the number of guest appearances by theatres in Ljubljana increased year by year. Public performances were at that time staged mainly in the town hall and the provincial hall. The provincial Estates occasionally also offered the riding centre to be used as a venue for theatre performances. 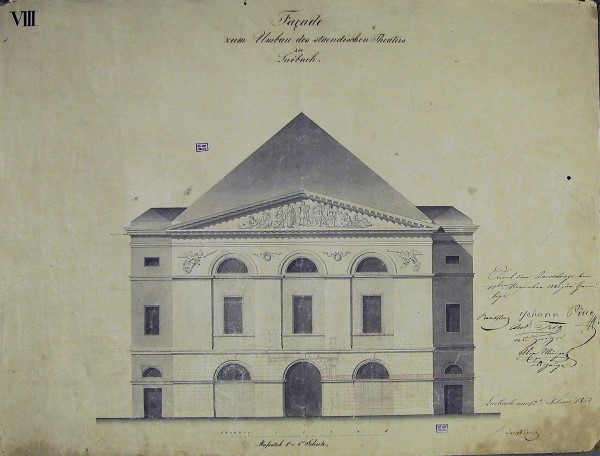 Thus for approximately ten years it served as the third public theatre venue in Ljubljana. In 1756 the Ljubljana architect Candido Zulliani, on the basis of a commission by the Carniolan Estates, created a plan and a wooden model of an adaptation of the riding centre into a provincial theatre. The aim was to relieve the old smaller auditoriums in the town hall and the Jesuit college, in which theatre performances had hitherto been held. The construction did not commence until 1765, at a time when Ljubljana was expecting a visit by the Empress and her husband. 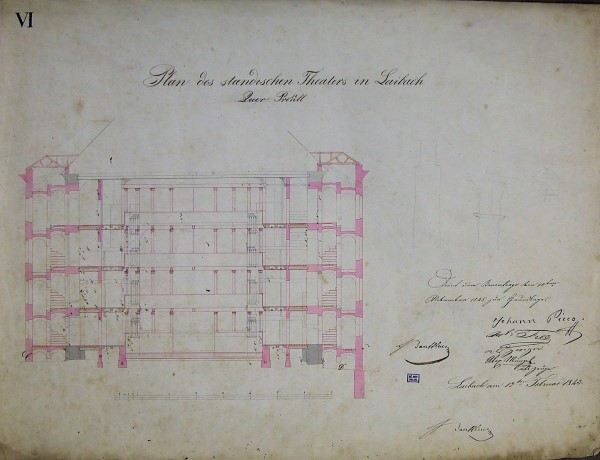 This never took place as on 18 August 1765 the Empress Maria Theresa’s husband, Francis I, suddenly died. The construction of the theatre thus began in June 1765 and was finished within six months. Because of the shortage of time and money, the construction was carried out rather shoddily, using cheap materials. The extensive adaptation of the riding centre into a theatre was carried out on the basis of new plans by the new provincial architect Lovrenc Prager (born in Vienna in 1720, died in 1791 in Ljubljana), who designed numerous important buildings at that time, in particular around Ljubljana. 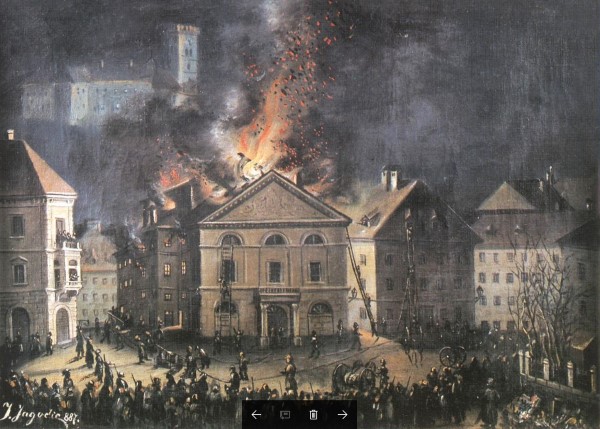 Among the most important are churches in Tunjice near Kamnik, Gabrje near Ljubljana and in Petrov?e near Žalec, and the mansion houses Novo Celje, Selo and Dol near Ljubljana, and Boštanj and Prapro?e near Grosuplje. Joseph Leopold Wiser von Berg, a painter of Ljubljana, also took part in the building of the new theatre. The more demanding decorative work in the building was carried out by two painters of stage sets from Vienna, Johann Gfall and Mittermayer.

The Baroque appearance of the former Estates Theatre is shown on a depiction by G. Pajk and in the plans of the existing building, created in December 1834 by the provincial building office, which are still kept at the Historical Archives in Ljubljana. Old archive sources also show the appearance of this former theatre and were partly published by Dušan Ludvik. The Baroque theatre preserved the ground plan of the former riding centre, but added two floors and a steep hipped roof.

The impressively designed main façade was emphasised with a triangular gable and a terrace above the entrance portal and designed in the spirit of subdued Baroque classicism. Above the rusticated ground floor level the colossal pilasters with simple capitals connected the two floors, whilst the corners were structured with two rusticated bands. The tall windows on the first floor were equipped with a profiled lintel, whilst the windows on the second floor were smaller and square. The whole ensemble finished in a low triangular gable, decorated with stuccoed tendrils.

A large lyre in the middle emphasised the purpose of the building. The other façades were designed in a utilitarian manner and had no detailed structure. In the interior, the entrance was followed by the central lobby and two social rooms, a space for the audience and the stage. The interior construction of the theatre with boxes, corridors, staircases and the stage was made of wood; only the external walls were made of brick.

The auditorium consisted of the stalls with benches, seventy boxes on four levels and a gallery. Some sources state that the theatre could hold an enviable 850 people, which would mean approximately a tenth of the whole of the population of Ljubljana at that time. However, a more detailed analysis of the preserved plans from 1834 shows that initially the theatre had no more than 400 seats and 200 standing places.

The stage section of the theatre included the stage and the space below it, and a smallish orchestra pit, extending into the stalls. The vertical communication in the stage section included ladders that provided access to the fly system. The ground plan of the building also included two extensions which were used as backstage space, dressing rooms and modest public conveniences. The rear extension was, due to the soft terrain on the bank of the River Ljubljanica, built on strong wooden supports. The theatre design was related to the still preserved, slightly smaller and lower former miners’ theatre in Idrija, built after 1769, maybe also according to plans designed by Lovrenc Prager.

Inside the theatre the large or imperial box was most luxuriously finished – it had curtains, was upholstered in plush and had eight chandeliers, 35 candles and could seat eight people. Sixteen candelabra positioned next to the walls and 14 two-branched candelabra were used to illuminate the auditorium. Tallow candles were used most of the time, but for special occasions the auditorium was illuminated with wax candles.

The stage was equipped with eight candelabra holding six candles each and thirty other lamps. In the wings of the theatre, behind the main façade, on the ground floor and the first floor there was a casino with a café and a billiards room. Preserved sources show that in 1775 the theatre had approximately 100 units of theatre decorations and props.

The sources mention sets for a yellow and Chinese room, a jail, a garden, a hall, a temple, a forest, a town, a farmhouse, a landscape, sea with ships and a rocky shore, whilst among the props a well, a painted life-size horse and tents are mentioned. The theatre building also had fire-fighting equipment, which in 1788 included 22 parts, four of which were fire engines.

The building of the theatre was commissioned by the Carniolan Estates of the realm and was thus given the name The Estates Theatre. The benches in the stalls were hired out each year, whilst most of the boxes were sold to Ljubljana citizens. The organisation of the theatre was led by a theatre committee. The theatre also had a director, inspector and two bookkeepers. In addition to theatre and opera performances, dances, concerts and other events also took place there.

The cost of the maintenance of the building was financed mainly from contributions by the box holders. There was no heating. In the first few years, performances were almost exclusively Italian operas, whilst from the late 18th century onward German theatre performances became more frequent. In 1789 the first performance in the Slovene language took place; on 28 December that year Anton Tomaž Linhart organised the staging of his play Županova Micka. Sadly, this was the only Slovene performance for a long time.

Soon after its construction, various improvements to the building began. In 1788, the uncomfortable benches in the stalls were replaced with padded, leather-clad seats. These had to be locked and were hired out every year at an auction. In 1829 both the exterior and interior were thoroughly renovated for the first time. The boxes were redesigned and the stage reconstructed and newly equipped.

Between 1845 and 1846 the second renovation and modernisation took place. On Wagner’s depiction of Ljubljana from 1844 the theatre still has its original appearance, whilst on the picture by Anton Jurman from 1848 it shows its new classicist exterior. The Ljubljana Historical Archives have kept the plans from 1843 and 1845, drawn up by the provincial building office and signed by the building master Johann Picco.

The renovation and alteration gave the theatre a more monumental character. The old Baroque façade was given a new classicist look. The old basic design with the arrangement of window and door openings and the terrace resting on two pillars was preserved, but all the small detail structuring was new. The façade was emphasised with the motif of large blind arcades with rectangular and semi-circular window openings.

The wide triangular gable was filled with a new, high quality stuccoed figural relief. The ambitiously renovated façade was one of the best architectural classicist creations in Ljubljana, alongside Hohn’s (later Souvan’s) building on Mestni trg 24, reconstructed in 1827, and the Casino building on Kongresni trg, completed in 1837. Inside, the auditorium was enlarged at the expense of the space next to the entrance façade, which was reduced by half.

A brand new wooden construction with boxes on four levels was built. The former top gallery was removed, whilst the stalls and the orchestra pit were enlarged. In the auditorium corners, two wide, curved staircases were erected, whilst two smaller staircases were built also in the two new extensions, added to the side façades on the exterior. The new extensions housed toilets. In addition, a heating system was installed.

The size of the stage remained the same. The auditorium was illuminated with simple gas lights and wax candles. The theatre thus came to resemble two still preserved smaller theatres in Maribor and Ptuj.

After the fire in the Vienna Ringtheater in 1881, in which many people died, an iron curtain was installed in the Ljubljana theatre between the stage and the auditorium. In addition, access along a narrow staircase leading from the men’s dressing room to the River Ljubljanica was built. But in spite of all these efforts the fire safety of the building was not greatly improved.

In the night between 16 and 17 February 1887 a huge fire completely destroyed the theatre building, including all the furnishings and equipment in it. Soon after, the remaining external walls were demolished.