Autograph letter signed “Mahler” to professor Alfred Wernicke (1856-1931), concerning the preparations for a concert series of his own works in Mannheim in Year 1910. 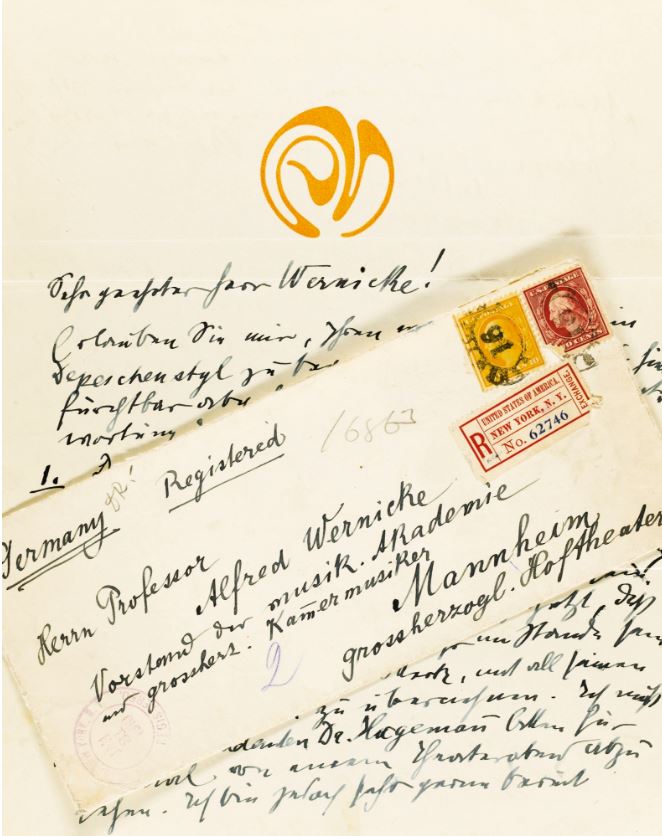 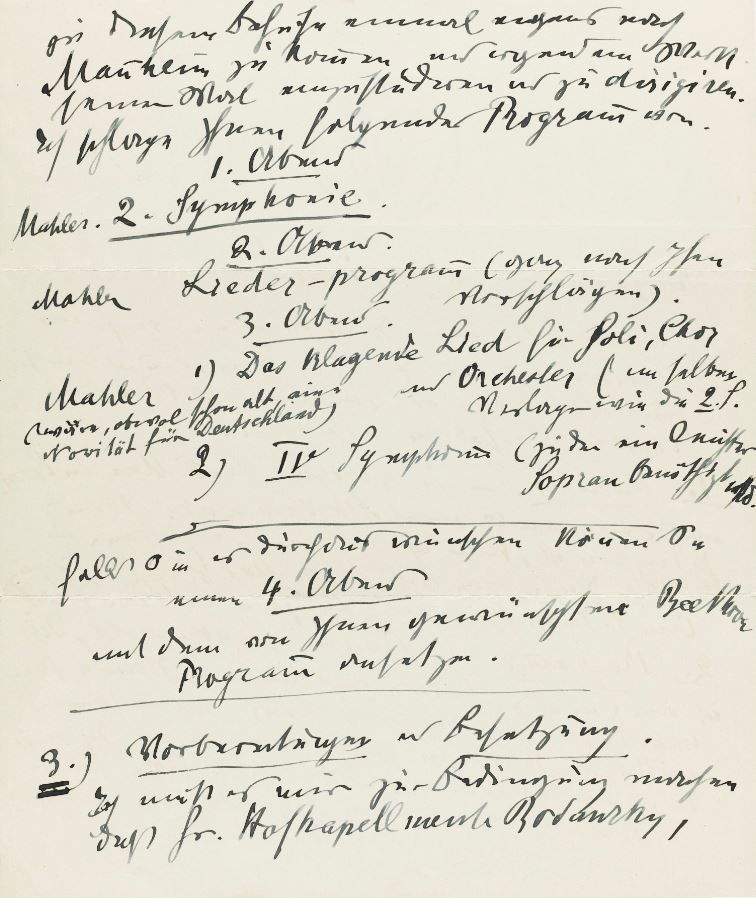 apologizing for replying in telegraph-style, since he is exhausted, organizing his reply under four numbered headings, concerning the date, the concert programme, the preparations and performers and lastly his fee, informing him that he will be at his disposal between 8 and 30 May, and that he must be in Vienna at the latest by 1 June, noting that he is so exhaustingly busy here that he will not be able to take on a theatrical work with all the necessary rehearsals, explaining that he is however prepared to conduct in Mannheim, outlining a suggested programme, consisting of three nights of his own works, including the Symphony No.2, Das klagende Lied and the Symphony No.4, offering the possibility of a fourth evening concert consisting of works by Beethoven, insisting that Hofkapellmeister Bodanzky prepare the orchestra, choir and soloists for his works very carefully, asking that Dr. Kraus be excluded from participation, since he has so far shown no interest in his works, and is obviously not favourably disposed towards them, asking that the other suggested names, which are unknown to him, be left entirely to his friend Bodanzky, recommending [Friedrich] Weidemann, [Richard] Mayr as excellent interpreters of his songs, and also [Fritz] Vogelstrom for some songs and the tenor part in Das klagende Lied, suggesting which songs could be sung at the Liederabend, namely those from three volumes published by Schott, and from Des Knaben Wunderhorn published by Weinberger, also mentioning the Rückert-Lieder, published by Kahnt, and ‘Reveille’ from Des Knaben Wunderhorn, and accepting without discussion the suggested fee; in a closing paragraph, Mahler asks to be recommended most cordially to the director Dr. Hagemann, whose acquaintance he is particularly looking forward to making, requests that he send his friend Bodanzky his best regards, and that he answer as speedily as possible since he has many arrangements to make
…Ich schlage Ihnen folgendes Program vor.
1. Abend
Mahler. 2. Symphonie.
2. Abend.
Mahler Lieder-programm (ganz nach Ihren Vorschlägen).
3. Abend.
Mahler 1) Das klagende Lied für Soli, Chor und Orchester (im selben Verlage wie die 2. S[ymphonie]. Wäre, obwol schon alt, eine Novität für Deutschland)
2) IV Symphonie (zudem ein…Sopran benötigt wird.[)]
Fall Sie es durchaus wünschen können Sie
einen 4. Abend
mit dem von Ihnen gewünschten Beethoven Programm ansetzen…

A fine letter from the hectic penultimate year of Mahler’s life. The concert season 1909-1910 of the Philharmonic Society of New York, whose conductor Mahler was from 1908, was a particularly strenuous one for the composer, and when he visited Europe in the summer of 1910 he was broken in health. Something of Mahler’s exhaustion can be sensed in the present letter (he says twice he is exhausted), although the overriding impression is still one of immense energy and drive. The European tour of 1910, notable for the premiere of the Eighth Symphony in Munich on 12 September and for the completion of the Adagio of the Tenth Symphony, would be Mahler’s last, the worn-out composer dying of bacterial endocarditis the following May.