Béla Viktor János Bartók was a Hungarian composer and pianist. He is considered one of the most important composers of the 20th century; he and Liszt are regarded as Hungary’s greatest composers (Gillies 2001). Through his collection and analytical study of folk music, he was one of the founders of comparative musicology, which later became ethnomusicology.

Béla Bartók was born in the small Banatian town of Nagyszentmiklós in the Kingdom of Hungary, Austria-Hungary (since 1920 Sânnicolau Mare, Romania) on March 25, 1881. Bartók’s family reflected some of the ethno-cultural diversities of the country. His father, Béla Sr., considered himself thoroughly Hungarian, because on his father’s side the Bartók family was a Hungarian lower noble family, originating from Borsod county (Móser 2006a, 44; Bartók 1981, 13), though his mother, Paula (born Paula Voit), had German as a mother tongue, but was ethnically of “mixed Hungarian” ancestry (Bayley 2001, 16) of partly Danube Swabian origin. Among her closest forefathers there were families with such names as Polereczky (Magyarized Polish or Slovak) and Fegyveres (Magyar). 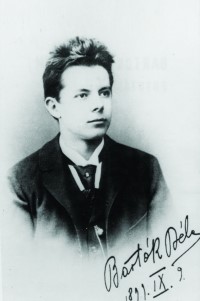 Béla displayed notable musical talent very early in life: according to his mother, he could distinguish between different dance rhythms that she played on the piano before he learned to speak in complete sentences (Gillies 1990, 6). By the age of four he was able to play 40 pieces on the piano and his mother began formally teaching him the next year.

Béla was a small and sickly child and suffered from severe eczema until the age of 5 (Gillies 1990, 5). In 1888, when he was seven, his father (the director of an agricultural school) died suddenly. Béla’s mother then took him and his sister, Erzsébet, to live in Nagysz?l?s (today Vinogradiv, Ukraine) and then to Pozsony (German: Pressburg, today Bratislava, Slovakia). In Pozsony, Béla gave his first public recital at age 11 to a warm critical reception. Among the pieces he played was his own first composition, written two years previously: a short piece called “The Course of the Danube” (de Toth 1999). Shortly thereafter László Erkel accepted him as a pupil.

From 1899 to 1903, Bartók studied piano under István Thomán, a former student of Franz Liszt, and composition under Hans Kossler (1853-1926) at the Royal Academy of Music in Budapest. There he met Zoltán Kodály, who influenced him greatly and became his lifelong friend and colleague. In 1903, Bartók wrote his first major orchestral work, Kossuth, a symphonic poem which honored Lajos Kossuth, hero of the Hungarian Revolution of 1848.

The music of Richard Strauss, whom he met in 1902 at the Budapest premiere of Also sprach Zarathustra, strongly influenced his early work. When visiting a holiday resort in the summer of 1904, Bartók overheard a young nanny, Lidi Dósa from Kibéd in Transylvania, sing folk songs to the children in her care. This sparked his lifelong dedication to folk music.

From 1907, he also began to be influenced by the French composer Claude Debussy, whose compositions Kodály had brought back from Paris. Bartók’s large-scale orchestral works were still in the style of Johannes Brahms and Richard Strauss, but he wrote a number of small piano pieces which showed his growing interest in folk music. The first piece to show clear signs of this new interest is the String Quartet No. 1 in A minor (1908), which contains folk-like elements.

In 1907, Bartók began teaching as a piano professor at the Royal Academy. This position freed him from touring Europe as a pianist and enabled him to work in Hungary. Among his notable students were Fritz Reiner, Sir Georg Solti, György Sándor, Ern? Balogh, and Lili Kraus. After Bartók moved to the United States, he taught Jack Beeson and Violet Archer.

In 1908, he and Kodály traveled into the countryside to collect and research old Magyar folk melodies. Their growing interest in folk music coincided with a contemporary social interest in traditional national culture. They made some surprising discoveries. Magyar folk music had previously been categorised as Gypsy music. The classic example is Franz Liszt’s famous Hungarian Rhapsodies for piano, which he based on popular art songs performed by Romani bands of the time. In contrast, Bartók and Kodály discovered that the old Magyar folk melodies were based on pentatonic scales, similar to those in Asian folk traditions, such as those of Central Asia, Anatolia and Siberia.

Bartók and Kodály quickly set about incorporating elements of such Magyar peasant music into their compositions. They both frequently quoted folk song melodies verbatim and wrote pieces derived entirely from authentic songs. An example is his two volumes entitled For Children for solo piano, containing 80 folk tunes to which he wrote accompaniment. Bartók’s style in his art music compositions was a synthesis of folk music, classicism, and modernism. His melodic and harmonic sense was profoundly influenced by the folk music of Hungary, Romania, and other nations. He was especially fond of the asymmetrical dance rhythms and pungent harmonies found in Bulgarian music. Most of his early compositions offer a blend of nationalist and late Romanticism elements.

In 1911, Bartók wrote what was to be his only opera, Bluebeard’s Castle, dedicated to Márta. He entered it for a prize by the Hungarian Fine Arts Commission, but they rejected his work as not fit for the stage (Chalmers 1995, 93). In 1917 Bartók revised the score for the 1918 première, and rewrote the ending. Following the 1919 revolution, he was pressured by the new Soviet government to remove the name of the librettist Béla Balázs from the opera (Chalmers 1995, 123), as he was blacklisted and had left the country for Vienna. Bluebeard’s Castle received only one revival, in 1936, before Bartók emigrated. For the remainder of his life, although he was passionately devoted to Hungary, its people and its culture, he never felt much loyalty to the government or its official establishments.

After his disappointment over the Fine Arts Commission competition, Bartók wrote little for two or three years, preferring to concentrate on collecting and arranging folk music. He collected first in the Carpathian Basin (then the Kingdom of Hungary), where he notated Hungarian, Slovakian, Romanian, and Bulgarian folk music. He also collected in Moldavia, Wallachia, and (in 1913) Algeria. The outbreak of World War I forced him to stop the expeditions; and he returned to composing, writing the ballet The Wooden Prince (1914–16) and the String Quartet No. 2 in (1915–17), both influenced by Debussy. 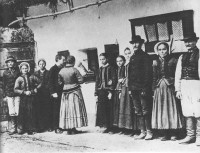 Raised as a Roman Catholic, by his early adulthood Bartók had become an atheist. He believed that the existence of God could not be determined and was unnecessary. He later became attracted to Unitarianism and publicly converted to the Unitarian faith in 1916. As an adult, his son later became president of the Hungarian Unitarian Church (Hughes 1999–2007).

Bartók wrote another ballet, The Miraculous Mandarin influenced by Igor Stravinsky, Arnold Schoenberg, as well as Richard Strauss. A modern story of prostitution, robbery, and murder, it was started in 1918, but not performed until 1926 because of its sexual content. He next wrote his two violin sonatas (written in 1921 and 1922 respectively), which are harmonically and structurally some of his most complex pieces.

In 1927-1928, Bartók wrote his Third and Fourth String Quartets, after which his compositions demonstrated his mature style. Notable examples of this period are Music for Strings, Percussion and Celesta (1936) and Divertimento for String Orchestra BB 118 (1939). The Fifth String Quartet was composed in 1934, and the Sixth String Quartet (his last) in 1939.

In 1936 he travelled to Turkey to collect and study folk music. He worked in collaboration with Turkish composer Ahmet Adnan Saygun mostly around Adana (Özgentürk 2008; Sipos 2000).

Béla Bartók died at age 64 in a hospital in New York City from complications of leukemia (specifically, of secondary polycythemia) on September 26, 1945. His funeral was attended by only ten people. Among them were his wife Ditta, their son Péter, and his pianist friend György Sándor (Anon. 2006).

Bartók’s body was initially interred in Ferncliff Cemetery in Hartsdale, New York. During the final year of communist Hungary in the late 1980s, the Hungarian government, along with his two sons, Béla III and Péter, requested that his remains be exhumed and transferred back to Budapest for burial, where Hungary arranged a state funeral for him on July 7, 1988. He was reinterred at Budapest’s Farkasréti Cemetery, next to the remains of Ditta, who died in 1982, the year after his centenary (Chalmers 1995, 214).

The Third Piano Concerto was nearly finished at his death. For his Viola Concerto, Bartók had completed only the viola part and sketches of the orchestral part. Both works were later completed by his pupil Tibor Serly. György Sándor was the soloist in the first performance of the Third Piano Concerto on February 8, 1946. Ditta Pásztory-Bartók later played and recorded it. The Viola Concerto was revised and polished in the 1990s by Bartók’s son, Peter; this version may be closer to what Bartók intended (Chalmers 1995, 210).