Carl Maria Friedrich Ernst von Weber was a German composer, conductor, pianist, guitarist and critic, one of the first significant composers of the Romantic school. Weber’s operas Der Freischütz, Euryanthe and Oberon greatly influenced the development of the Romantische Oper (Romantic opera) in Germany. Der Freischütz came to be regarded as the first German “nationalist” opera, Euryanthe developed the Leitmotif technique to an unprecedented degree, while Oberon may have influenced Mendelssohn’s music for A Midsummer Night’s Dream and, at the same time, revealed Weber’s lifelong interest in the music of non-Western cultures.

This interest was first manifested in Weber’s incidental music for Schiller’s translation of Gozzi’s Turandot, for which he used a Chinese melody, making him the first Western composer to use an Asian tune that was not of the pseudo-Turkish kind popularized by Mozart and others. A brilliant pianist himself, Weber composed four sonatas, two concertos and the Konzertstück in F minor (concert piece), which influenced composers such as Chopin, Liszt and Mendelssohn.

The Konzertstück provided a new model for the one-movement concerto in several contrasting sections (such as Liszt’s, who often played the work), and was acknowledged by Stravinsky as the model for his Capriccio for Piano and Orchestra. Weber’s shorter piano pieces, such as the Invitation to the Dance, were later orchestrated by Berlioz, while his Polacca Brillante was later set for piano and orchestra by Liszt.

Weber’s compositions for woodwind instruments occupy an important place in the musical repertoire. His compositions for the clarinet, which include two concertos, a concertino, a quintet, a duo concertante, and variations on a theme (posthumously), are regularly performed today. His Concertino for Horn and Orchestra requires the performer to simultaneously produce two notes by humming while playing—a technique known as “multiphonics”. His bassoon concerto and the Andante e Rondo ungarese (a reworking of a piece originally for viola and orchestra) are also popular with bassoonists. Weber’s contribution to vocal and choral music is also significant.

His body of Catholic religious music was highly popular in 19th-century Germany, and he composed one of the earliest song cycles, Die Temperamente beim Verluste der Geliebten ([Four] Temperaments on the Loss of a Lover). 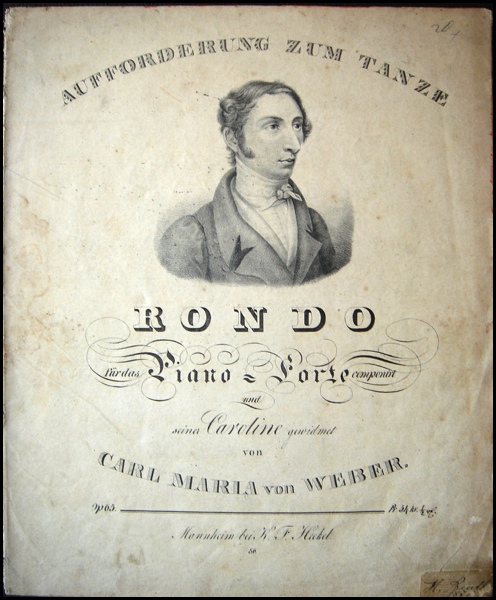 Invitation to the Dance.

Weber was also notable as one of the first conductors to conduct without a piano or violin. Weber’s orchestration has also been highly praised and emulated by later generations of composers – Berlioz referred to him several times in his Treatise on Orchestration while Debussy remarked that the sound of the Weber orchestra was obtained through the scrutiny of the soul of each instrument. His operas influenced the work of later opera composers, especially in Germany, such as Marschner, Meyerbeer and Wagner, as well as several nationalist 19th-century composers such as Glinka.

Homage has been paid to Weber by 20th-century composers such as Debussy, Stravinsky, Mahler (who completed Weber’s unfinished comic opera Die drei Pintos and made revisions of Euryanthe and Oberon) and Hindemith (composer of the popular Symphonic Metamorphosis of Themes by Carl Maria von Weber). Weber also wrote music journalism and was interested in folksong, and learned lithography to engrave his own works.

His unfinished opera Die drei Pintos (The Three Pintos) was originally given by Weber’s widow to Giacomo Meyerbeer for completion; it was eventually completed by Gustav Mahler, who conducted the first performance in this form in Leipzig on 20 January 1888.

Weber’s father gave him a comprehensive education, which was however interrupted by the family’s constant moves. In 1796, Weber continued his musical education in Hildburghausen, where he was instructed by the oboist Johann Peter Heuschkel. On 13 March 1798, Weber’s mother died of tuberculosis. That same year, Weber went to Salzburg to study with Michael Haydn, the younger brother of Joseph Haydn, who agreed to teach Carl free of charge. Later that year, Weber traveled to Munich to study with the singer Johann Evangelist Wallishauser and organist Johann Nepomuk Kalcher.

1798 also saw the twelve-year-old Weber’s first published work, six fughettas for piano, published in Leipzig. Other compositions of that period, among them a mass, and his first opera, Die Macht der Liebe und des Weins (The Power of Love and Wine), are lost; but a set of Variations for the Pianoforte was later lithographed by Weber himself, under the guidance of Alois Senefelder, the inventor of the process.

In 1800, the family moved to Freiberg in Saxony, where Weber, then 14 years old, wrote an opera called Das stumme Waldmädchen (The Silent Forest Maiden), which was produced at the Freiberg theatre. It was later performed in Vienna, Prague, and St Petersburg. The young Weber also began to publish articles as a music critic, for example in the Leipziger Neue Zeitung in 1801.

In 1801, the family returned to Salzburg, where Weber resumed his studies with Michael Haydn. He later continued studying in Vienna with Georg Joseph Vogler, known as Abbé Vogler, founder of three important music schools (in Mannheim, Stockholm, and Darmstadt); another famous pupil of Vogler was Giacomo Meyerbeer, who became a close friend of Weber.

In 1803, Weber’s opera, Peter Schmoll und seine Nachbarn (Peter Schmoll and his Neighbors) was produced in Augsburg, and gave Weber his first success as a popular composer. Vogler, impressed by his pupil’s talent, recommended him to the post of Director at the Breslau Opera in 1806. Weber sought to reform the Opera by pensioning off older singers, expanding the orchestra, and tackling a more challenging repertoire. His attempts at reform were met with strong resistance from the musicians and the Breslau public. He left his post in Breslau in a fit of frustration and from 1807 to 1810, Weber served as private secretary to Duke Ludwig, brother of King Frederick I of Württemberg. Weber’s time in Württemberg was plagued with troubles. He fell deeply into debt and had an ill-fated affair with Margarethe Lang (de), a singer at the opera. Furthermore, Weber’s father Franz Anton misappropriated a vast quantity of Duke Ludwig’s money.

Franz Anton and Carl were charged with embezzlement and arrested on 9 February 1810. Carl was in the middle of a rehearsal for his opera Silvana when he was arrested and thrown in prison by order of the king. Though no one doubted Carl’s innocence, King Frederick I had grown tired of the composer’s pranks. After a summary trial, Carl and his father were banished from Württemberg. Nevertheless, Carl remained prolific as a composer during this period, writing a quantity of religious music, mainly for the Catholic mass. This however earned him the hostility of reformers working for the re-establishment of traditional chant in liturgy.

In 1810, Weber visited several cities throughout Germany; from 1813 to 1816 he was director of the Opera in Prague; from 1816 to 1817 he worked in Berlin, and from 1817 onwards he was director of the prestigious Opera in Dresden, working hard to establish a German opera, in reaction to the Italian opera which had dominated the European music scene since the 18th century. On 4 November 1817, he married Caroline Brandt, a singer who created the title role of Silvana. In 1819, he wrote perhaps his most famous piano piece, Invitation to the Dance. The successful premiere of Der Freischütz on 18 June 1821 in Berlin led to performances all over Europe.

On the very morning of the premiere, Weber finished his Konzertstück in F minor for Piano and Orchestra, and he premiered it a week later. In 1823, Weber composed the opera Euryanthe to a mediocre libretto, but containing much rich music, the overture of which in particular anticipates Richard Wagner. In 1824, Weber received an invitation from The Royal Opera, London, to compose and produce Oberon, based on Christoph Martin Wieland’s poem of the same name. Weber accepted the invitation, and in 1826 he travelled to England, to finish the work and conduct the premiere on 12 April.

Weber was already suffering from tuberculosis when he visited London; he died at the house of Sir George Smart during the night of 4/5 June 1826. Weber was 39 years old. He was buried in London, but 18 years later his remains were transferred to the family vault in Dresden. The eulogy at the reburial was performed by Wagner.

His unfinished opera Die drei Pintos (The Three Pintos) was originally given by Weber’s widow to Giacomo Meyerbeer for completion; it was eventually completed by Gustav Mahler, who conducted the first performance in this form in Leipzig on 20 January 1888.

Weber’s piano music all but disappeared from the repertoire. One possible reason for this is that Weber had very large hands and delighted in writing music that suited them. There are several recordings of the major works for the solo piano (including complete recordings of the piano sonatas and the shorter piano pieces, by Garrick Ohlsson, Alexander Paley and others), and there are recordings of the individual sonatas by Claudio Arrau (1st Sonata), Alfred Cortot (2nd Sonata), Sviatoslav Richter (3rd Sonata) and Leon Fleisher (4th Sonata).

The Invitation to the Dance, although better known in Berlioz’s orchestration (as part of the ballet music for a Paris production of Der Freischütz), has long been played and recorded by pianists (e.g., Benno Moiseiwitsch [in Carl Tausig’s arrangement). Invitation to the Dance also served as the thematic basis for Benny Goodman’s swing theme song for the radio program Let’s Dance. 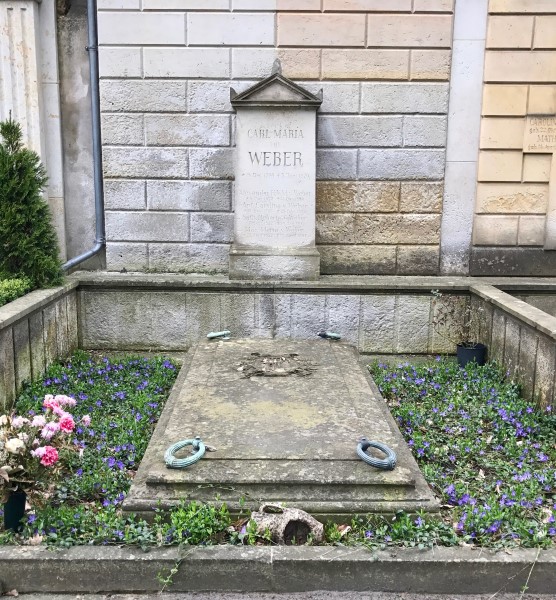 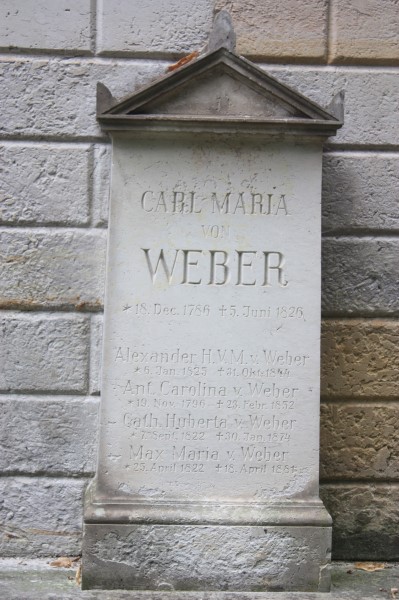 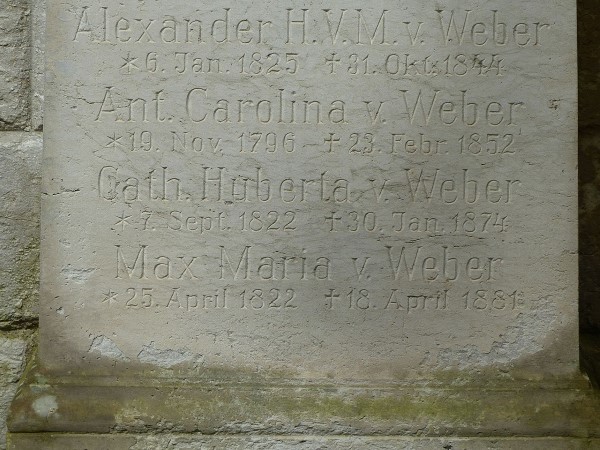