Die drei Pintos (The Three Pintos) is a comic opera of which Carl Maria von Weber (1786-1826) began composing the music, working on a libretto by Theodor Hell. The work was completed about 65 years after Weber’s death by Gustav Mahler.

In 1821, Theodor Hell developed a drama called The Battle for the Bride, with a story taken from Der Brautkampf (1819) by Carl Seidel (de). Hell gave his friend Weber the text, but Weber disliked the title and changed it to Die Drei Pintos (“The Three Pintos”). The title comes from the protagonist, Don Pinto, who is impersonated by two other characters in the course of the opera.

Weber began composing the score and worked at it off and on from then until 1824, but other work including Euryanthe intervened and it remained incomplete at his death (in 1826). All that existed, so far, were a number of coded fragments of music: 7 sketches for 17 numbers, and a total of bars scored out of an eventual total of 1700 bars.

Weber’s bereaved family made a number of unsuccessful attempts to have Die Drei Pintos completed, but eventually his widow Caroline took the draft to Giacomo Meyerbeer (1791-1864), a composer, and friend of Theodor Hell. For some reason, Meyerbeer did nothing and — 26 years later, just before Caroline died — the fragments were returned to her untouched. Her son Max then approached various composers seeking one who would finish the opera, but he was advised to “give up”.

After Max’s death in 1881, his son Karl von Weber (1849-1897) (Carl senior’s grandson) inherited the composer’s musical estate, and vigorously continued the task of trying to find someone to complete the opera. He eventually encountered the 26-year-old Gustav Mahler, who was working as second conductor at the Leipzig Stadttheater for the 1886-1887 season. Mahler was keen to help, and became a regular visitor at the Webers’ residence (ostensibly to deal with operatic matters though he was also enamoured of Carl’s wife Marion von Weber-Schwabe (1856-1931); Karl tried to ignore that situation as best he could).

In the spring of 1887, Mahler cracked C. M. von Weber’s code, unscrambled the drafts and instrumentalized the existing fragments in accordance with Weber’s wishes. A further 13 musical numbers were needed in addition to the existing 7, and Mahler went ahead and composed this music himself, based on Weber’s themes. It was decided that the original shape of the opera should be kept: a dialogue with musical numbers. However, the interlude music between Acts I and II (Pinto’s dream) and the two-part finale of Act III were written by Mahler, although still based on Weber’s leitmotifs and themes. 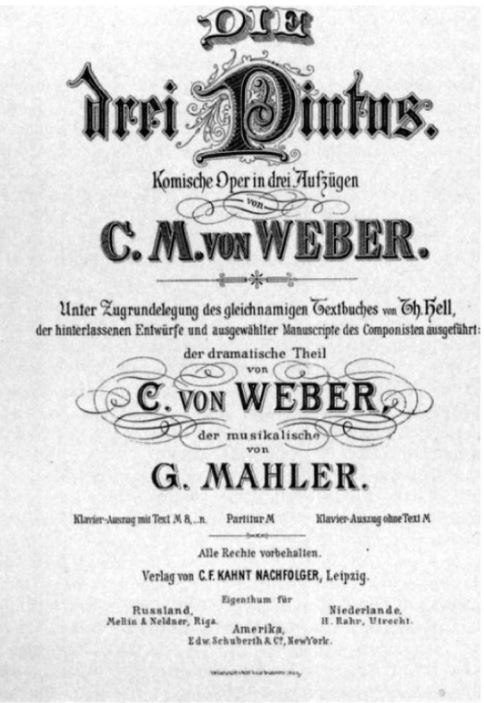 Mahler had been an admirer of Weber, and in this way he succeeded in creating a complete opera which was premiered at the Neues Stadttheater, Leipzig on 20 January 1888, with Mahler conducting. Richard Strauss admired the work, but appears to have changed his opinion after his mentor Hans von Bulow (1830-1894) panned it; like Bülow, the influential critic Eduard Hanslick (1825-1904) was also critical.

After Mahler’s death (1911) Die drei Pintos gradually disappeared from regular production. Although it is rarely produced nowadays, the “Intermezzo”, composed entirely by Mahler based on melodies by Weber, hints at the flute calls (echoed by other wind instruments such as the oboe and bassoon) in the slow section of the first movement of Mahler’s Symphony no. 1.

Don Gaston de Viratos is taking leave of his friends before leaving for Madrid, where he is set to become a government official and also hopes to find a bride. Inez, daughter of the innkeeper, tells him (by way of a warning) of the “romance of the lovesick cat Mansor”, the song of a faithless lover who, despite burning lover’s oaths, leaves his Zaide in the lurch.

Now Don Pinto de Fonseca, a foolish country squire, appears; he is also on his way to Madrid, to marry Donna Clarissa. The marriage has been arranged between the two fathers and he is worried about his first meeting with the girl, whom he has never met: how does one woo one’s future wife? Gaston proceeds to teach him all the arts of the fiery lover — his servant Ambrosio having to play the part of the bride.

When Pinto, now exhausted, turns to food and drink, Gaston decides to save the unknown girl from this uncouth wooer: he makes Pinto drunk and takes from him the letter promising marriage. To the amusement of the other guests at the inn, Gaston and Ambrosio put the sleeping Don Pinto to bed, so that he can sleep off his drunkenness and they can proceed to Madrid.

Don Pantaleone Roiz de Pacheco has assembled all his servants, and they are wondering why. He then appears himself, and announces the marriage of his daughter Clarissa to the son of a friend, Don Pinto. In the general joy which ensues, nobody notices Clarissa’s despair: she loves Don Gomez de Freiros, and wants to marry no other. Her love has had to be kept secret, because Gomez was forced into hiding following a duel. Clarissa’s servant Laura consoles and encourages her. She brings Gomez to the house secretly, and he is determined to defend his love with his sword.

Laura and the servants are preparing the hall in Don Pantaleone’s palace for the wedding. Gaston and Ambrosio discover Laura, whom Ambrosio succeeds in winning for himself. Gomez comes across Gaston, whom he takes to be Don Pinto; and he reveals to him his love for Clarissa. The false Pinto (Gaston) insists upon the rights of the stolen letter with its promise of marriage, and challenges Clarissa’s lover (Gomez) to a duel. Gomez, anxious to avoid any insult, offers him satisfaction. However Pinto-Gaston generously releases the girl before Pantaleone’s people come to greet the bridegroom, and they decide that Don Gomez will present himself as (that is, claim to be) Don Pinto to get around the plans of the bride’s father.

Don Pantaleone is just bringing in his daughter, the bride, when the real Pinto enters the hall. Nobody believes his assurances that he is Don Pinto de Fonseca, and when he tries to show his bride the art of wooing learned from the student Gaston, he is ridiculed. He then notices Gaston and rushes at him so angrily that the latter has to threaten him with his sword. Don Pinto is thrown out, Gaston and Ambrosio are satisfied with the outcome of their adventure, and nothing now stands in the way of the marriage between Clarissa and Gomez.