Charles Ives was born in Danbury, Connecticut in 1874, the son of George Ives, a U.S. Army bandleader in the American Civil War, and his wife Mary Parmelee. A strong influence of Charles’s may have been sitting in the Danbury town square, listening to his father’s marching band and other bands on other sides of the square simultaneously. George Ives’ unique music lessons were also a strong influence on Charles; George Ives took an open-minded approach to musical theory, encouraging his son to experiment in bitonal and polytonal harmonizations. It was from his father that Charles Ives also learned the music of Stephen Foster. Ives became a church organist at the age of 14 and wrote various hymns and songs for church services, including his Variations on ‘America’ , which Ives wrote for a Fourth of July concert in Brewster, New York. The work is considered challenging even by modern concert organists, but Ives famously spoke of it as being “as much fun as playing baseball”, a commentary on his own organ technique at that age.

Ives moved to New Haven in 1893, enrolling in the Hopkins School, where he captained the baseball team. In September 1894, Ives entered Yale University, studying under Horatio Parker. Here he composed in a choral style similar to his mentor, writing church music and even an 1896 campaign song for William McKinley. On November 4, 1894, Charles’s father died, a crushing blow to the young composer, but to a large degree Ives continued the musical experimentation he had begun with George Ives.

At Yale, Ives was a prominent figure; he was a member of HeBoule, Delta Kappa Epsilon (Phi chapter) and Wolf’s Head Society, and sat as chairman of the Ivy Committee. He enjoyed sports at Yale and played on the varsity football team. Michael C. Murphy, his coach, once remarked that it was a “crying shame” that Charles Ives spent so much time at music as otherwise he could have been a champion sprinter. His works Calcium Light Night and Yale-Princeton Football Game show the influence of college and sports on Ives’ composition. He wrote his Symphony No. 1 as his senior thesis under Parker’s supervision.

He continued his work as a church organist until May 1902. Soon after Ives graduated from Yale, he started work in the actuarial department of the Mutual Life Insurance company of New York. In 1899, he moved to employment with the insurance agency Charles H. Raymond & Co., where he stayed until 1906. In 1907, upon the failure of Raymond & Co., he and his friend Julian Myrick formed their own insurance agency Ives & Co., which later became Ives & Myrick, where he remained until he retired. During his career as an insurance executive and actuary, Ives devised creative ways to structure life-insurance packages for people of means, which laid the foundation of the modern practice of estate planning. His Life Insurance with Relation to Inheritance Tax, published in 1918, was well received. As a result of this he achieved considerable fame in the insurance industry of his time, with many of his business peers surprised to learn that he was also a composer. In his spare time he composed music and, until his marriage, worked as an organist in Danbury and New Haven as well as Bloomfield, New Jersey and New York City.

In 1907, Ives suffered the first of several “heart attacks” (as he and his family called them) that he had throughout his lifetime. These attacks may have been psychological in origin rather than physical. Following his recovery from the 1907 attack, Ives entered into one of the most creative periods of his life as a composer.

After marrying Harmony Twitchell (1876-1969) in 1908, they moved into their own apartment in New York. He had a remarkably successful career in insurance, and continued to be a prolific composer until he suffered another of several heart attacks in 1918, after which he composed very little, writing his very last piece, the song “Sunrise”, in August 1926. In 1922, Ives published his 114 Songs, which represents the breadth of his work as a composer—it includes art songs, songs he wrote as a teenager and young man, and highly dissonant songs such as “The Majority.” 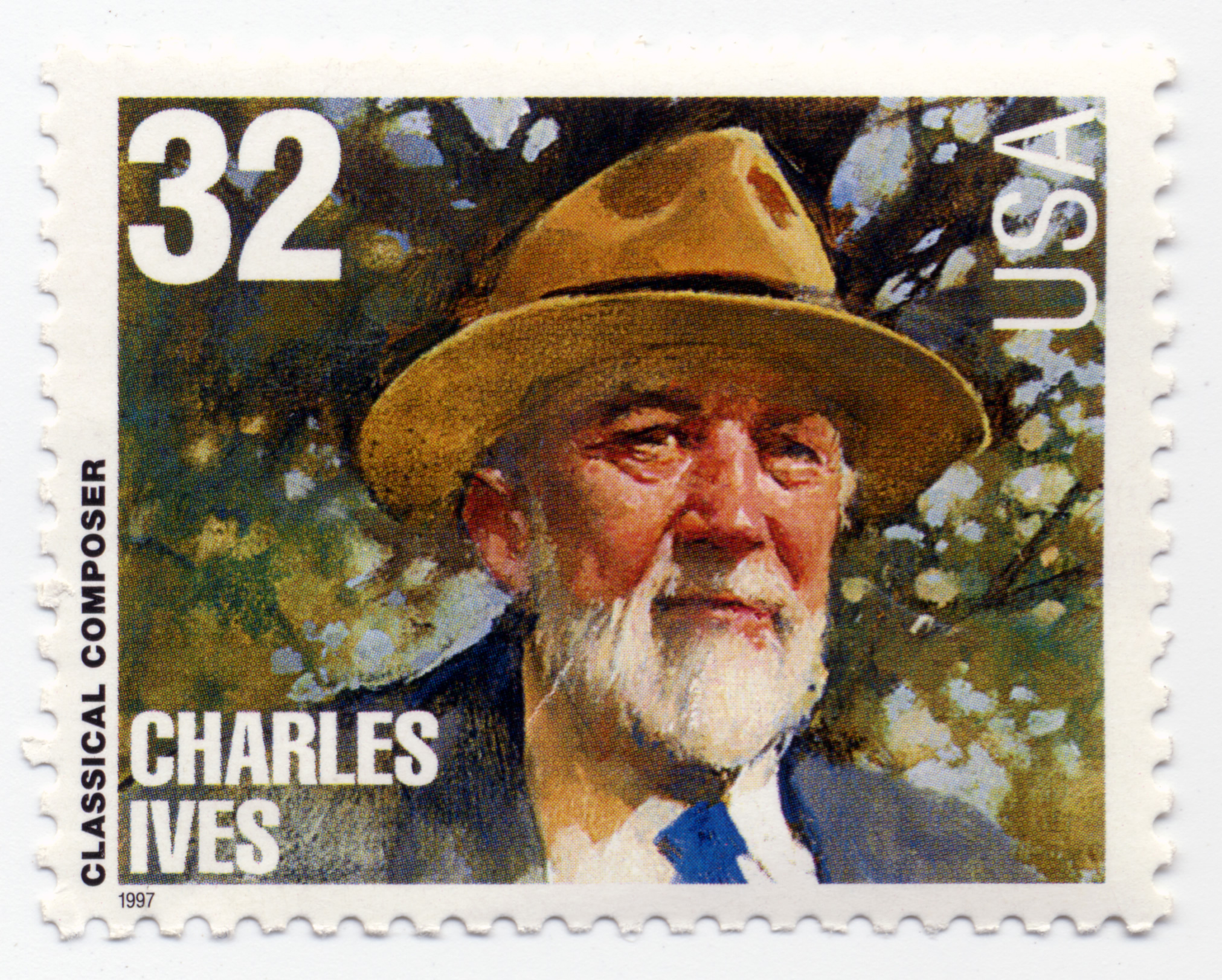 According to his wife, one day in early 1927 he came downstairs with tears in his eyes. He could compose no more, he said, “nothing sounds right.” There have been numerous theories advanced to explain the silence of his late years, which seems as mysterious as the last several decades of the life of Jean Sibelius, who also stopped composing at almost the same time. While Ives had stopped composing, and was increasingly plagued by health problems, he did continue to revise and refine his earlier work, as well as oversee premieres of his music. After continuing health problems, including diabetes, in 1930 he retired from his insurance business, which gave him more time to devote to his musical work, but he was unable to write any new music. During the 1940s he revised his Concord Sonata, publishing it in 1947 (an earlier version of the sonata and the accompanying prose volume, Essays Before a Sonata were privately printed in 1920).

Ives died of a stroke in 1954 in New York City. His widow bequeathed the royalties from his music to the American Academy of Arts and Letters for the Charles Ives Prize.

Charles Ives career and dedication towards music was from the time when he started playing drums in his father’s band at a young age. Ives published a large collection of songs, many of which had piano parts. He composed two string quartets and other works of chamber music, though he is now best known for his instrumental music. His work as an organist led him to write Variations on ‘America’ in 1891, which he premiered at a recital celebrating the Fourth of July.

Around 1910, Ives began composing his most accomplished works including the “Holiday Symphony” and “Three Places in New England”. “The Piano Sonata No. 2, Concord, Mass.”, by Charles Ives, known as the “Concord Sonata” was one of his most remarkable pieces. He started work on this in 1911 and completed most of it in 1915. However, it wasn’t until 1920 that the piece was published and the revised version appeared only in 1947. This piece contains one of the most striking examples of Ives’ experimentalism. In the second movement, he instructed the pianist to use a 14¾ in (37.5 cm) piece of wood to create a massive cluster chord. The piece was a typical Ives as it juxtaposed various elements and it was very mysterious.

Another remarkable piece of orchestral music Ives completed was his “Fourth symphony”. He worked on this from 1910 to 1916. This symphony is notable for its complexity and over sized orchestra. This symphony has four movements and a complete performance of this symphony was not given until 1965, i.e. half a century after the symphony was completed. Ives left behind material for an unfinished “Universe Symphony”, which he was unable to assemble in his lifetime despite two decades of work. This was due to his health problems as well as his shifting idea of the work.