Although he claimed Alsatian birth, recent scholarship suggests that Charles Martin Loeffler was born in Germany. His parents, Karl Löffler and Helene Schwerdtmann, were natives of Berlin and were married there on 06-12-1857. Furthermore, a student record at the Hochschule für Musik indicates that Loeffler was born in Schöneberg bei Berlin. That Loeffler seemingly falsified his birthplace is proof of his hostility toward Germany; in fact, he went to great lengths to disassociate himself from the country he believed claimed his father’s life (Karl Löffler suffered a stroke while imprisoned by the Prussian government). Instead, Loeffler aligned himself with France by asserting French nationality and acquiring French manners and tastes. Ultimately, he chose America as his permanent residence, becoming a citizen in 1887 as well as one of the greatest protagonists of impressionistic music in the United States.

Loeffler’s principal instrument was the violin; by the age of thirteen, he had decided to become a professional violinist. In order to pursue his dream, Loeffler enrolled at the Hochschule für Musik, a school for instrumental music founded by Joseph Joachim, the celebrated violinist who championed the music of Johannes Brahms. From 1874 to 1877, he received lessons from Joseph Joachim (1831-1907), as well as from Eduard Rappoldi, an excellent violinist who played in Joachim’s quartet. After three years of instruction at the Hochschule, Loeffler traveled to France to continue his musical training. He took violin lessons from Lambert-Joseph Massart, who had taught virtuoso Fritz Kreisler, and composition lessons from Ernest Guiraud, best remembered as the teacher of Claude Debussy. Loeffler also gained performance experience in France, first as a member of the Pasdeloup Orchestra and later in Baron Paul von Derwies’s private orchestra (1879-1881).

After the sudden death of Derwies in the summer of 1881, Loeffler immigrated to America, hailed as the “land of opportunity.” He arrived in New York on 27 July 1881, armed with a letter of introduction from Joachim. Loeffler immediately found employment playing in the New York Symphony Orchestra, which was led by Leopold Damrosch. He also played in various festivals organized by conductor Theodore Thomas. Loeffler’s time in New York was short-lived, for in the fall of 1882 he assumed the post of assistant concertmaster for the Boston Symphony Orchestra (the BSO), a position he held for over twenty years.

Having established himself in professional circles as an accomplished musician, Loeffler dedicated more of his time to composition. He proved to be a prolific composer and penned many works during the 1890s. On 20 November 1891, the BSO gave the premiere of Loeffler’s first orchestral work, Les veillées de l’Ukraine, a suite for violin and orchestra. In 1893, Loeffler set seven poems by French symbolist Paul Verlaine for voice, viola, and piano. That same year, he composed his Morceau fantastique, for violoncello and orchestra; the work received its debut in 1894. Inspired by Maurice Maeterlinck’s marionette drama, Loeffler composed La mort de Tintagiles in 1897. And in 1902, Loeffler composed Poème païen, which evolved into his most famous and important orchestral work, A Pagan Poem. 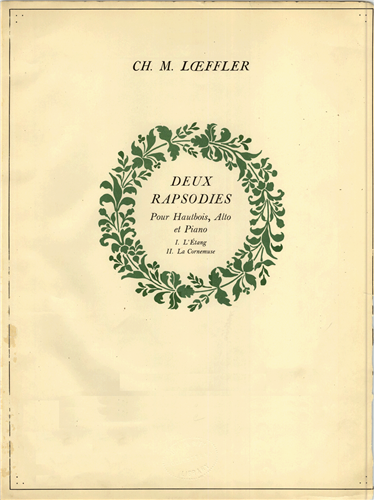 After twenty-one years of service, Loeffler retired from the BSO in 1903 and, two years later, settled in Medfield, Massachusetts. After a twenty-four year engagement, Loeffler married his long-time fiancée, Elise Fay, on 10 December 1910. Although he kept busy tending his farmland, Loeffler continued to teach and to compose. It was at this time that Loeffler chose English and American texts as the basis for his vocal settings. American authors Edgar Allan Poe and Walt Whitman especially appealed to Loeffler, and in 1905 he set two of Poe’s texts in his Four Poems, op. 15. In 1912, Loeffler based his first opera on The Passion of Hilarion, a play by Scottish writer William Sharp, who also wrote under the pseudonym Fiona Macleod.

During the last two decades of his life, Loeffler became known as a major proponent of American music. He assisted with the foundation of the New York Institute of Musical Art and the Juilliard School, and served on the executive board of Arthur Farwell’s publishing enterprise, the Wa-Wan Press. In 1925, Loeffler received a commission from Elizabeth Sprague Coolidge, a well-known patron of the arts, for a new work in honor of the opening of the Coolidge Auditorium at the Library of Congress. The result was his Canticum fratris solis, scored for soprano and chamber orchestra, which debuted on 28 October 1925.

Loeffler died on 19-05-1935. Before her own death a few months later, his wife, Elise Fay, donated Loeffler’s manuscripts to the Music Division at the Library of Congress. The Library is also the repository for the largest collection of Loeffler’s correspondence. Because of his many contributions to American music, he was referred to in obituaries as the “dean of American composers.” Indeed, Loeffler’s unique ability to combine a variety of American musical elements with his French tastes and ideals has rendered him one of our nation’s greatest composers.