Achille-Claude Debussy was a French composer. Along with Maurice Ravel, he was one of the most prominent figures associated with Impressionist music, though he himself disliked the term when applied to his compositions. He was made Chevalier of the Legion of Honour in his native France in 1903.Debussy was among the most influential composers of the late 19th and early 20th centuries, and his use of non-traditional scales and chromaticism influenced many composers who followed. Debussy’s music is noted for its sensory content and frequent usage of atonality. The prominent French literary style of his period was known as Symbolism, and this movement directly inspired Debussy both as a composer and as an active cultural participant

Claude Debussy was the eldest of five children. His father, Manuel-Achille Debussy, owned a china shop there; his mother, Victorine Manoury Debussy, was a seamstress. The family moved to Paris in 1867, but in 1870 Debussy’s pregnant mother fled with Claude to his paternal aunt’s home in Cannes to escape the Franco-Prussian War. Debussy began piano lessons there at the age of seven with an Italian violinist in his early 40s named Cerutti; his aunt paid for his lessons. In 1871 he drew the attention of Marie Mauté de Fleurville, who claimed to have been a pupil of Frédéric Chopin.

Debussy always believed her, although there is no independent evidence to support her claim. His talents soon became evident, and in 1872, at age ten, Debussy entered the Paris Conservatoire, where he spent the next 11 years. During his time there he studied composition with Ernest Guiraud, music history/theory with Louis-Albert Bourgault- Ducoudray, harmony with Émile Durand, piano with Antoine François Marmontel, organ with César Franck, and solfège with Albert Lavignac, as well as other significant figures of the era. He also became a lifelong friend of fellow student and distinguished pianist Isidor Philipp. After Debussy’s death, many pianists sought Philipp’s advice on playing Debussy’s works.

Debussy was argumentative and experimental from the outset, although clearly talented. He challenged the rigid teaching of the Academy, favoring instead dissonances and intervals that were frowned upon. Like Georges Bizet, he was a brilliant pianist and an outstanding sight reader, who could have had a professional career had he so wished. The pieces he played in public at this time included sonata movements by Beethoven, Schumann and Weber, and Chopin’s Ballade No. 2, a movement from the Piano Concerto No. 1, and the Allegro de concert. During the summers of 1880, 1881, and 1882, Debussy accompanied Nadezhda von Meck, the wealthy patroness of Pyotr Ilyich Tchaikovsky, as she travelled with her family in Europe.

The young composer’s many musical activities during these vacations included playing four-hand pieces with von Meck at the piano, giving music lessons to her children, and performing in private concerts with some of her musician friends.Despite von Meck’s closeness to Tchaikovsky, the Russian master appears to have had minimal effect on Debussy. In September 1880 she sent Debussy’s Danse bohémienne for Tchaikovsky’s perusal. A month later Tchaikovsky wrote back to her: “It is a very pretty piece, but it is much too short. Not a single idea is expressed fully, the form is terribly shriveled, and it lacks unity.” Debussy did not publish the piece, and the manuscript remained in the von Meck family; it was eventually sold to Schott music publishers in Mainz, and published by them in 1932.

A greater influence was Debussy’s close friendship with Marie-Blanche Vasnier, a singer he met when he began working as an accompanist to earn some money, embarking on an eight year affair together. She and her husband, Parisian civil servant Henri, gave Debussy emotional and professional support. Henri Vasnier introduced him to the writings of influential French writers of the time, which gave rise to his first songs, settings of poems by Paul Verlaine (the son-in-law of his former teacher Mme. Mauté de Fleurville).

As the winner of the 1884 Prix de Rome with his composition L’enfant prodigue, Debussy received a scholarship to the Académie des Beaux-Arts, which included a four-year residence at the Villa Medici, the French Academy in Rome, to further his studies (1885–1887). According to letters to Marie-Blanche Vasnier, perhaps in part designed to gain her sympathy, he found the artistic atmosphere stifling, the company boorish, the food bad, and the monastic quarters “abominable”.Neither did he delight in Italian opera, as he found the operas of Donizetti and Verdi not to his taste.

Debussy was often depressed and unable to compose, but he was inspired by Franz Liszt, whose command of the keyboard he found admirable. In June 1885, Debussy wrote of his desire to follow his own way, saying, “I am sure the Institute would not approve, for, naturally it regards the path which it ordains as the only right one. But there is no help for it! I am too enamoured of my freedom, too fond of my own ideas!” 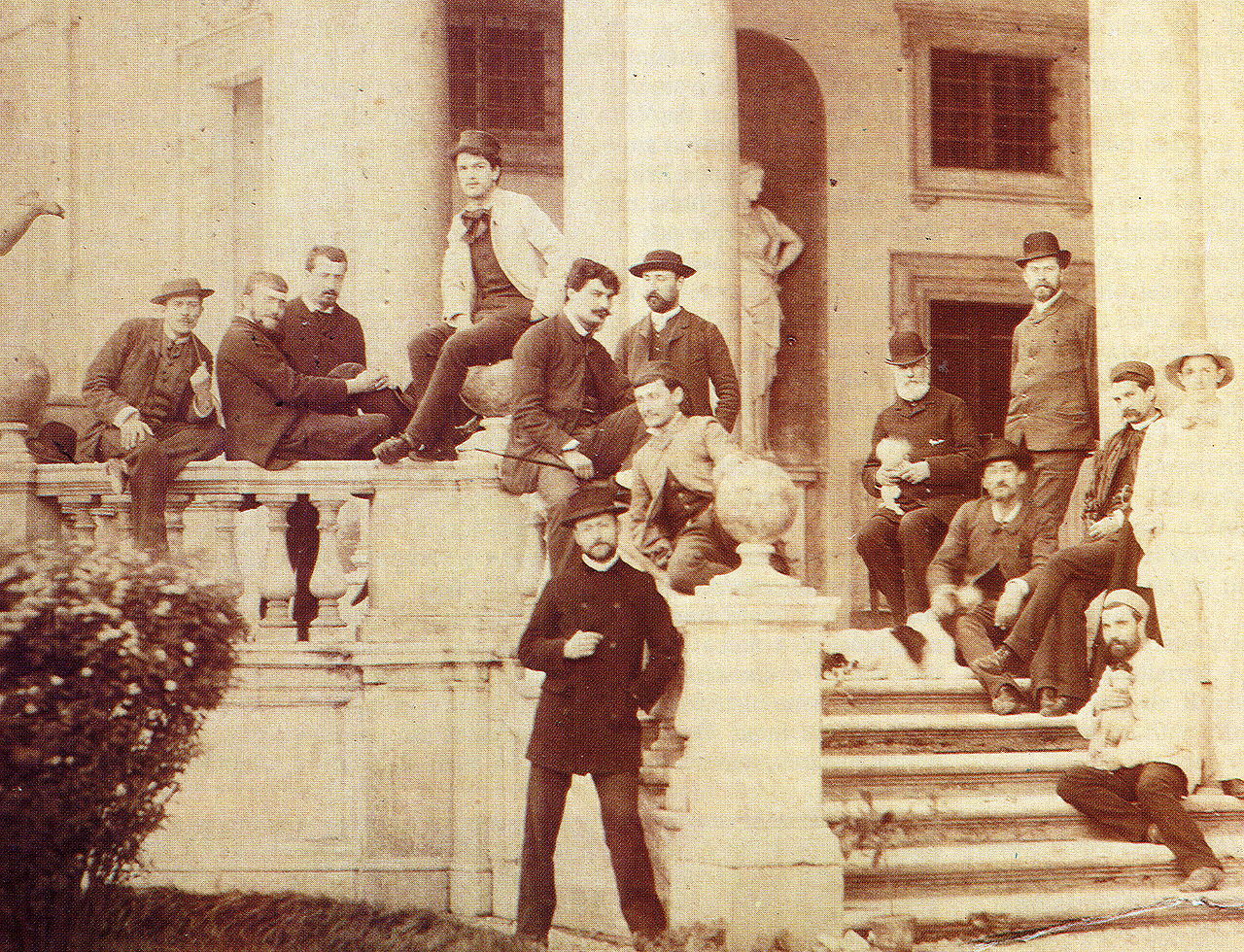 Claude Debussy at the Villa Medici in Rome at the centre in the white jacket (1885).

Debussy finally composed four pieces that were sent to the Academy: the symphonic ode Zuleima (based on a text by Heinrich Heine); the orchestral piece Printemps; the cantata La damoiselle élue (1887–1888) (which was criticized by the Academy as “bizarre”, although it was the first piece in which the stylistic features of Debussy’s later style began to emerge); and the Fantaisie for piano and orchestra, which was heavily based on César Franck’s music and therefore eventually withdrawn by Debussy. The Academy chided him for “courting the unusual” and hoped for something better from the gifted student. Although Debussy’s works showed the influence of Jules Massenet, Massenet concluded, “He is an enigma.”

During his visits to Bayreuth in 1888–9, Debussy was exposed to Wagnerian opera, which would have a lasting impact on his work. Debussy, like many young musicians of the time, responded positively to Richard Wagner’s sensuousness, mastery of form, and striking harmonies.Wagner’s extroverted emotionalism was not to be Debussy’s way, but the German composer’s influence is evident in La damoiselle élue and the 1889 piece Cinq poèmes de Charles Baudelaire. Other songs of the period, notably the settings of Verlaine – Ariettes oubliées, Trois mélodies, and Fêtes galantes – are all in a more capricious style.

Around this time, Debussy met Erik Satie, who proved a kindred spirit in his experimental approach to composition and to naming his pieces. Both musicians were bohemians during this period, enjoying the same cafe society and struggling to stay afloat financially. In 1889, at the Exposition Universelle in Paris, Debussy first heard Javanese gamelan music. He incorporated gamelan scales, melodies, rhythms, and ensemble textures into some of his compositions, most notably Pagodes from his piano collection Estampes.

Debussy’s private life was often turbulent. At the age of 18 he began an eight-year affair with Marie-Blanche Vasnier, the wife of Parisian civil servant Henri. The relationship eventually faltered following his winning of the Prix de Rome in 1884 and obligatory residence in Rome.

On his permanent return to Paris and his parents’ home on the avenue de Berlin (now rue de Liège) he began a tempestuous relationship with Gabrielle (‘Gaby’) Dupont, a tailor’s daughter from Lisieux, soon cohabiting with her on the rue de Londres, and later the rue Gustave Doré. During this time he also had an affair with the singer Thérèse Roger, to whom he was briefly engaged. Such cavalier behaviour was widely condemned, and precipitated the end of his long friendship with Ernest Chausson. 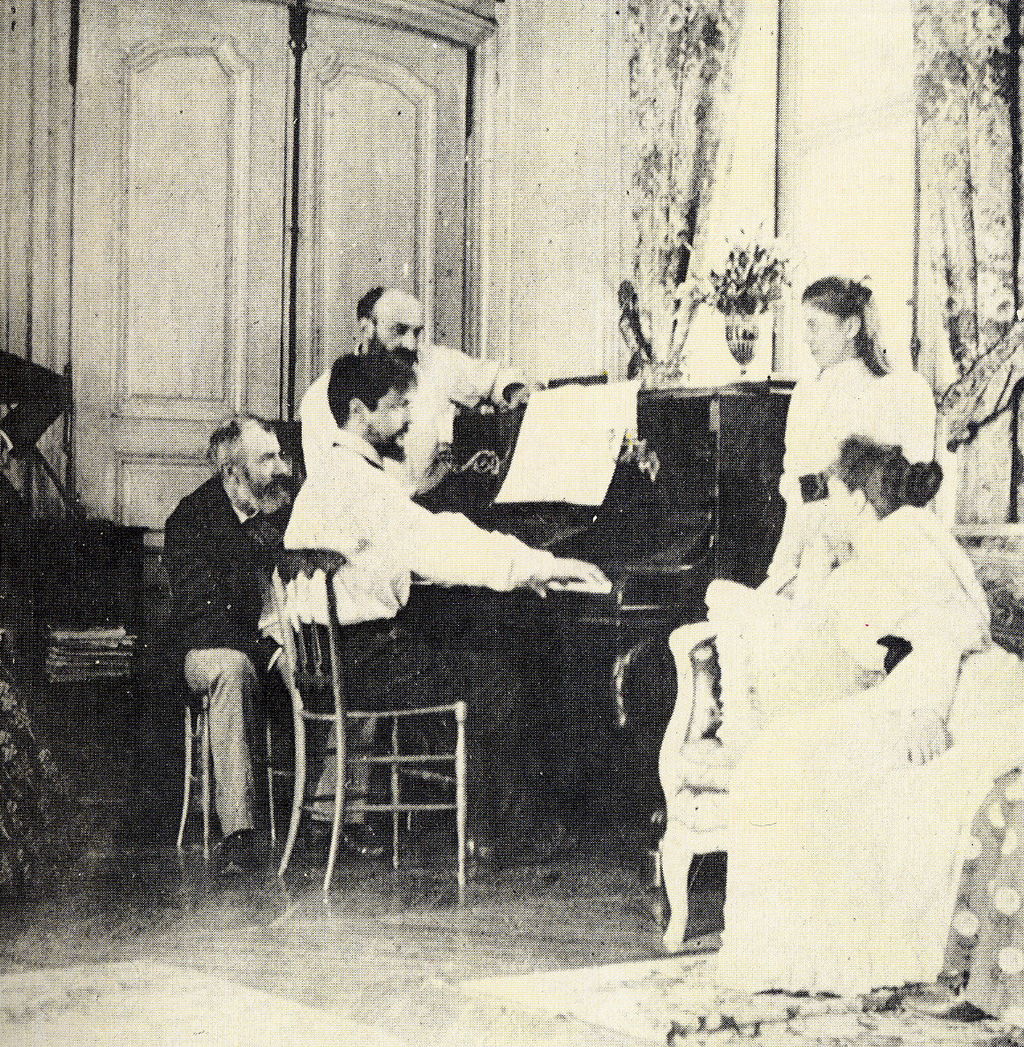 He ultimately left Dupont for her friend Rosalie (‘Lilly’) Texier, a fashion model whom he married in 1899, after threatening suicide if she refused him.However, although Texier was affectionate, practical, straightforward, and well liked by Debussy’s friends and associates, he would become increasingly irritated by her intellectual limitations and lack of musical sensitivity. Moreover, her looks had prematurely aged, and she was unable to bear children.

In 1904 Debussy was introduced to Emma Bardac, wife of Parisian banker Sigismond Bardac, by her son Raoul, who was one of his students. In contrast to Texier, Bardac was a sophisticate, a brilliant conversationalist, and an accomplished singer. After dispatching Lilly to her father’s home at Bichain in Villeneuve-la-Guyard on 15 July 1904, Debussy secretly took Bardac to Jersey for a holiday. On their return to France, Debussy wrote to Texier on 11 August from Dieppe, informing her that their marriage was over, but still making no mention of Bardac.

Debussy briefly moved to an apartment at 10 avenue Alphand. On 14 October, five days before their fifth wedding anniversary, Texier attempted suicide, shooting herself in the chest with a revolver while standing in the Place de la Concorde; she survived, although the bullet remained lodged in her vertebrae for the rest of her life. The ensuing scandal was to alienate Debussy from many of his friends, whilst Bardac was disowned by her family.

In the spring of 1905, finding the hostility towards them intolerable, Debussy and Bardac (now pregnant) fled to England, via Jersey.Bardac’s divorce was finalized in May.The couple settled at the Grand Hotel in Eastbourne from 24 July to 30 August 1905, where Debussy was to correct proofs to his symphonic suite La mer, celebrating his divorce from Texier on 2 August.

After a brief visit to London, the couple returned to Paris in September, buying a house in a courtyard development off the Avenue du Bois de Boulogne (now Avenue Foch) where Debussy would reside for the rest of his life. Their daughter (the composer’s only child) Claude-Emma was born there on 30 October. Her parents were eventually married in 1908, their troubled union enduring until Debussy’s death in 1918. Claude-Emma, more affectionately known as ‘Chouchou’, was a great musical inspiration to Debussy (she was the dedicatee of his Children’s Corner suite); he remarked towards the end of his life, when gravely ill, that were it not for her, he might have committed suicide. Claude-Emma outlived her father by scarcely a year, succumbing to the diphtheria epidemic of 1919 after her doctor administered the wrong treatment.

Mary Garden, who played the part of Melisande in the original production of Pelléas et Mélisande in 1902, was to write of him: “I honestly don’t know if Debussy ever loved anybody really. He loved his music – and perhaps himself. I think he was wrapped up in his genius… He was a very, very strange man.”

Debussy died of rectal cancer at his Paris home on 25 March 1918, at the age of 55. He had been diagnosed with the cancer in 1909 after experiencing haemorrhaging, and in December 1915 underwent one of the earliest colostomy operations ever performed. The operation achieved only a temporary respite, and occasioned him considerable frustration (he was to liken dressing in the morning to “all the labours of Hercules in one”).

His death occurred in the midst of the aerial and artillery bombardment of Paris during the German Spring Offensive of World War I. The funeral procession made its way through deserted streets to Pere Lachaise cemetery as the German guns bombarded the city. The military situation in France was critical, and did not permit the honour of a public funeral with ceremonious graveside orations. Debussy’s body was reinterred the following year in the small Passy Cemetery sequestered behind the Trocadéro, fulfilling his wish to rest ‘among the trees and the birds’; his wife and daughter are buried with him.