Dmitri Dmitriyevich Shostakovich (???????? ??????????? ???????????), Dmitrij Dmitrievi? Šostakovi?, was a Russian composer and pianist, and a prominent figure of 20th-century music. Shostakovich achieved fame in the Soviet Union under the patronage of Soviet chief of staff Mikhail Tukhachevsky, but later had a complex and difficult relationship with the government. Nevertheless, he received accolades and state awards and served in the Supreme Soviet of the RSFSR (1947–1962) and the Supreme Soviet of the Soviet Union (from 1962 until his death).

After a period influenced by Sergei Prokofiev and Igor Stravinsky, Shostakovich developed a hybrid style, as exemplified by Lady Macbeth of the Mtsensk District (1934). This single work juxtaposed a wide variety of trends, including the neo-classical style (showing the influence of Stravinsky) and post-Romanticism (after Gustav Mahler). Sharp contrasts and elements of the grotesque characterize much of his music.

Shostakovich’s orchestral works include 15 symphonies and six concerti. His chamber output includes 15 string quartets, a piano quintet, two piano trios, and two pieces for string octet. His piano works include two solo sonatas, an early set of preludes, and a later set of 24 preludes and fugues. Other works include three operas, several song cycles, ballets, and a substantial quantity of film music; especially well known is The Second Waltz, Op. 99, music to the film The First Echelon (1955–1956). 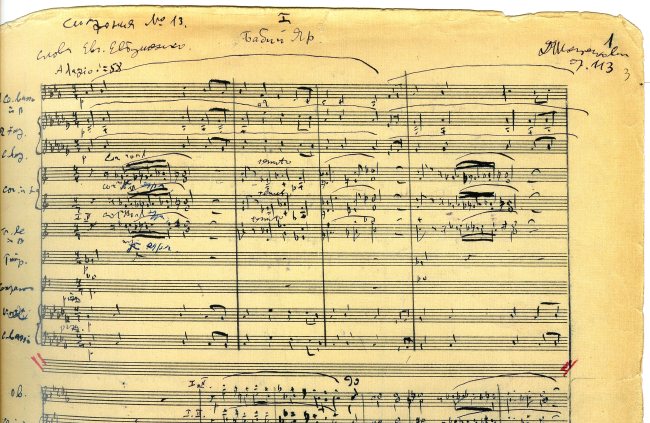 Shostakovich’s works are broadly tonal and in the Romantic tradition, but with elements of atonality and chromaticism. In some of his later works (e.g., the Twelfth Quartet), he made use of tone rows. His output is dominated by his cycles of symphonies and string quartets, each totaling fifteen works. The symphonies are distributed fairly evenly throughout his career, while the quartets are concentrated towards the latter part.

Among the most popular are the Fifth and Seventh Symphonies and the Eighth and Fifteenth Quartets. Other works include the operas Lady Macbeth of Mtsensk, The Nose and the unfinished The Gamblers based on the comedy of Nikolai Gogol; six concertos (two each for piano, violin and cello); two piano trios; and a large quantity of film music.

Shostakovich’s music shows the influence of many of the composers he most admired: Bach in his fugues and passacaglias; Beethoven in the late quartets; Mahler in the symphonies and Berg in his use of musical codes and quotations. Among Russian composers, he particularly admired Modest Mussorgsky, whose operas Boris Godunov and Khovanshchina he re-orchestrated; Mussorgsky’s influence is most prominent in the wintry scenes of Lady Macbeth and the Eleventh Symphony, as well as in his satirical works such as “Rayok”.

Prokofiev’s influence is most apparent in the earlier piano works, such as the first sonata and first concerto. The influence of Russian church and folk music is very evident in his works for unaccompanied choir of the 1950s.

Shostakovich’s relationship with Stravinsky was profoundly ambivalent; as he wrote to Glikman, “Stravinsky the composer I worship. Stravinsky the thinker I despise.” He was particularly enamoured of the Symphony of Psalms, presenting a copy of his own piano version of it to Stravinsky when the latter visited the USSR in 1962. (The meeting of the two composers was not very successful, however; observers commented on Shostakovich’s extreme nervousness and Stravinsky’s “cruelty” to him.) 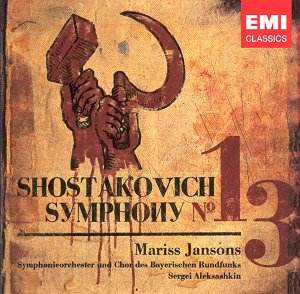 Many commentators have noted the disjunction between the experimental works before the 1936 denunciation and the more conservative ones that followed; the composer told Flora Litvinova, “without ‘Party guidance’ … I would have displayed more brilliance, used more sarcasm, I could have revealed my ideas openly instead of having to resort to camouflage.” Articles published by Shostakovich in 1934 and 1935 cited Berg, Schoenberg, Krenek, Hindemith, “and especially Stravinsky” among his influences.Key works of the earlier period are the First Symphony, which combined the academicism of the conservatory with his progressive inclinations; The Nose (“The most uncompromisingly modernist of all his stage-works”; Lady Macbeth. which precipitated the denunciation; and the Fourth Symphony, described in Grove’s Dictionary as “a colossal synthesis of Shostakovich’s musical development to date”.

The Fourth Symphony was also the first in which the influence of Mahler came to the fore, prefiguring the route Shostakovich was to take to secure his rehabilitation, while he himself admitted that the preceding two were his least successful.

In the years after 1936, Shostakovich’s symphonic works were outwardly musically conservative, regardless of any subversive political content. During this time he turned increasingly to chamber works, a field that permitted the composer to explore different and often darker ideas without inviting external scrutiny. While his chamber works were largely tonal, they gave Shostakovich an outlet for sombre reflection not welcomed in his more public works.

This is most apparent in the late chamber works, which portray what is described in Grove’s Dictionary as a “world of purgatorial numbness”; in some of these he included the use of tone rows, although he treated these as melodic themes rather than serially. Vocal works are also a prominent feature of his late output, setting texts often concerned with love, death and art. 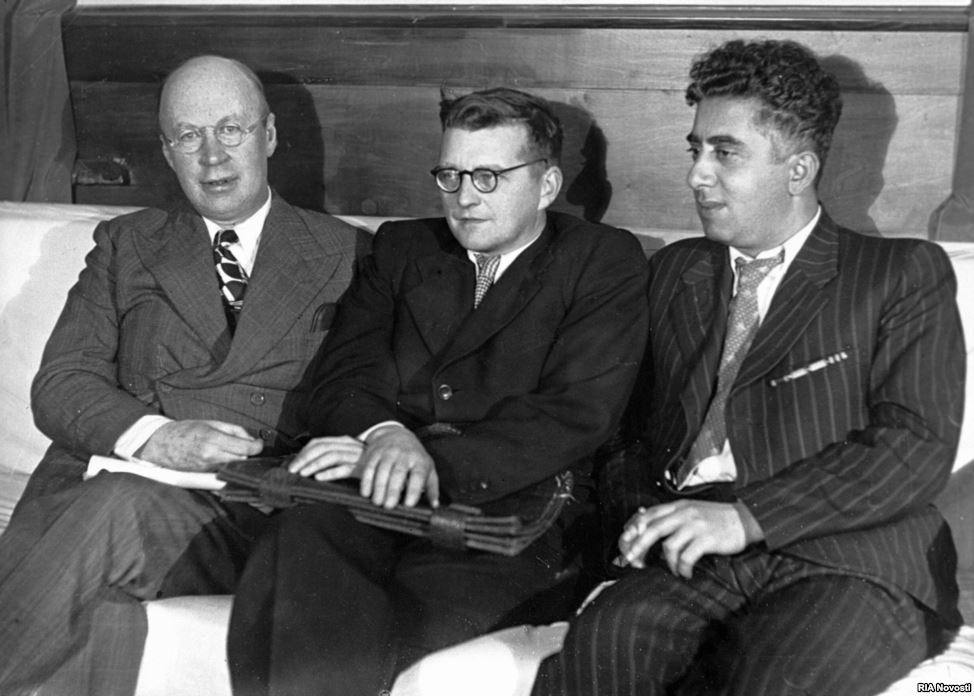 Even before the Stalinist anti-Semitic campaigns in the late 1940s and early 1950s, Shostakovich showed an interest in Jewish themes. He was intrigued by Jewish music’s “ability to build a jolly melody on sad intonations”. Examples of works that included Jewish themes are the Fourth String Quartet (1949), the First Violin Concerto (1948), and the Four Monologues on Pushkin Poems (1952), as well as the Piano Trio in E minor (1944). He was further inspired to write with Jewish themes when he examined Moisei Beregovski’s thesis on the theme of Jewish folk music in 1946.

In 1948, Shostakovich acquired a book of Jewish folk songs, and from this he composed the song cycle From Jewish Poetry. He initially wrote eight songs that were meant to represent the hardships of being Jewish in the Soviet Union. However in order to disguise this, Shostakovich ended up adding three more songs meant to demonstrate the great life Jews had under the Soviet regime. Despite his efforts to hide the real meaning in the work, the Union of Composers refused to approve his music in 1949 under the pressure of the anti-Semitism that gripped the country. From Jewish Poetry could not be performed until after Stalin’s death in March 1953, along with all the other works that were forbidden. 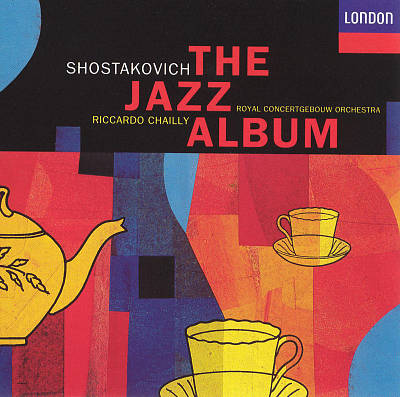 Shostakovich was in many ways an obsessive man: according to his daughter he was “obsessed with cleanliness”; he synchronised the clocks in his apartment; he regularly sent cards to himself to test how well the postal service was working. Elizabeth Wilson’s Shostakovich: A Life Remembered (1994 edition) indexes 26 references to his nervousness. Mikhail Druskin remembers that even as a young man the composer was “fragile and nervously agile”. Yuri Lyubimov comments, “The fact that he was more vulnerable and receptive than other people was no doubt an important feature of his genius”. In later life, Krzysztof Meyer recalled, “his face was a bag of tics and grimaces”.

In his lighter moods, sport was one of his main recreations, although he preferred spectating or umpiring to participating (he was a qualified football referee). His favourite football club was Zenit Leningrad, which he would watch regularly. He also enjoyed playing card games, particularly patience. He was fond of satirical writers such as Gogol, Chekhov and Mikhail Zoshchenko.

The influence of the latter in particular is evident in his letters, which include wry parodies of Soviet officialese. Zoshchenko himself noted the contradictions in the composer’s character: “he is … frail, fragile, withdrawn, an infinitely direct, pure child … [but he is also] hard, acid, extremely intelligent, strong perhaps, despotic and not altogether good-natured (although cerebrally good-natured)”.

He was diffident by nature: Flora Litvinova has said he was “completely incapable of saying ‘No’ to anybody.” This meant he was easily persuaded to sign official statements, including a denunciation of Andrei Sakharov in 1973; on the other hand he was willing to try to help constituents in his capacities as chairman of the Composers’ Union and Deputy to the Supreme Soviet. Oleg Prokofiev commented that “he tried to help so many people that … less and less attention was paid to his pleas.” When asked if he believed in God, Shostakovich said “No, and I am very sorry about it.”