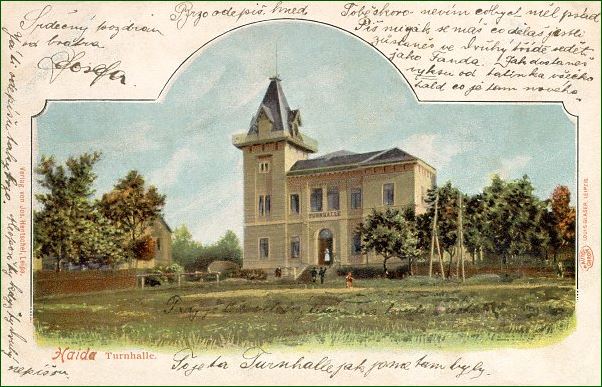 At his birth home in the Kalinova ulice No. 109 there is a memorial plaque. Ludvík Slánský (1838-1905), a talented musician from a local teacher’s family, sat down in his youth as a soloist of the choir of St. Vitus Cathedral in Prague by. He became a professor at the Prague Conservatory and since 1870 was a conductor at the Deutsche Oper in Prague; a post he held throughout 30 years hold.

Ludwig Slansky, conductor, violinist and composer was the son of a teacher. Slansky came to Prague in 1849 and was taught as a chorister at St. Vitus Cathedral of Jan Nepomuk Škroup. 1852-1858 he studied at the Prague Conservatory at Mildner violin and was from 1859 violin, in 1862-63 he was ballet accompanist and music director at the Estates Theatre. After the departure of Eduard Tauwitz (March 1863) he became his successor as 2nd Kapellmeister and placed in this position to become 1st Kapellmeister Jahn in its last season in Prague. Under the successors Jahns (Genée, then Rappoldi) 2nd Kapellmeister, Slansky moved in 1871 to the 1st Kapellmeister at, but this place had in 1885 to the newly engagement. Anton Seidl and Mahler (both s. D.) to cede.

In 1889 he joined as a rule, after the 30-04-1886 his 100th opera premiere (in addition there were 37 premieres operetta) had conducted. House conductors represent; he mastered the entire repertoire, was respected by the orchestra and guaranteed next-changing you. and singers the continuity of the opera house. Among the most outstanding events of its activity include the Prague Erstauff. Of Wagner’s “The Mastersingers of Nuremberg” (1871) and “Tristan und Isolde” (1886). Also in Prague concert life actively engaged, he has conducted 1872-84 alternately with Adolf ?ech and Bedrich Smetana, the Philharmonic Orchestra and led the Ver.- perf. Symphon of Smetana. Seal “Vyšehrad”.