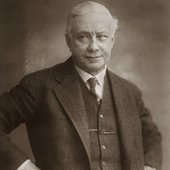 He studied law and music simultaneously in Graz. He did not finish his law degree, but continued to study music, his teacher being Wilhelm Mayer (also known as W. A. Rémy). Subsequently, he conducted at the theater in Graz, in Berlin and a few other places. From 1886 to 1894 he was Kapellmeister of the 88th Infantry of Prague, and it was here that he saw his greatest triumph with the premiere of Donna Diana (16-12-1894).

In the spring of 1902 he settled in Berlin, touring to Russia and England from time to time. When the Nazi Party came to power in 1933, Reznicek tried not to become involved to avoid putting into risk his daughter, Felicitas who was working for Britain’s MI-6. Reznicek was a personal friend of Richard Strauss (1864-1949). However, the relation between the two seems to have been an ambivalent one.

Reznicek’s symphonic poem Schlemihl (1912) can be seen as a direct parody of Strauss’ A Hero’s Life. The use of (often sarcastic) humor is a feature of much of Reznicek’s music, from the jibbering Blaubart in the opera Ritter Blaubart through the sardonic Dance around the Golden Calf from Der Sieger (1913) to the expressionist Tarantella last movement of his Dance Symphony (No. 5, 1925). This Eulenspiegelei (a reference to the literary prankster Till Eulenspiegel) frequently got him into trouble in a world that was unaccustomed to the use of humour in music and art.

Ferdinand von ?ezní?ek was his half-brother.

Emil von Reznízek was born in Vienna. He studied law as well as music in Graz. He discontinued his law studies, but continued in music. He worked as a conductor at the theatre in Graz and also in Berlin and other cities. From 1886 to 1894 he was the Musical Director of the 88th Infantry in Prague.

On 16-12-1894 his best known work, the opera “Donna Diana” had its premiere at the Deutsches Theater in Prague. In 1902 he settled in Berlin as the Kresebechstrasse 32, where he lived until his death.

He frequently routed in England and Russia. When the nazis came to power he had to be careful because his wife was Jewish and his daughter Felicitas worked for the British MI-6. He was a friend of Richard Strauss and he joined the Ständigen Rat für internationale Zusammenarbeit der Komponisten to protect his family. His wife died in 1939 and in 1943 Felicitas convinced him to find shelter from the air raids in Berlin by moving to Baden near Vienna.

His health detoriated and shortly after he returned to his house in Berlin in 1945 he died. The Reznicekgasse in Vienna was named after him in 1955.

Today, Reznicek is mainly remembered for the overture to his opera Donna Diana, composed in 1894. The overture is a popular stand-alone piece at symphonic concerts and it served as the theme for the American radio (1947-1955) series Challenge of the Yukon.

The first of his four string quartets (composed in 1921) received its world premiere recording from the Franz Schubert Quartet of Vienna in 1996. The German label CPO has started a project to record all of Reznicek’s orchestral output. In this series, the symphonic poems Der Sieger (1913) and Schlemihl (1912), along with some symphonies (No. 2 “Ironische” and No. 5 “Tanzsinfonie”) and the overture Raskolnikoff (1931) were released in November, 2006; symphony No. 1 in D minor “Tragic” was released by CPO in 2008.