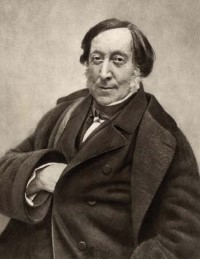 Gioachino Antonio Rossini was an Italian composer who wrote 39 operas as well as sacred music, chamber music, songs, and some instrumental and piano pieces. His best-known operas include the Italian comedies Il barbiere di Siviglia (The Barber of Seville) and La Cenerentola (Cinderella), and the French-language epics Moïse et Pharaon and Guillaume Tell (William Tell). A tendency for inspired, song-like melodies is evident throughout his scores, which led to the nickname “The Italian Mozart”. Until his retirement in 1829, Rossini had been the most popular opera composer in history. He is quoted as having joked, “Give me the laundress’ bill and I will set to music even that.” 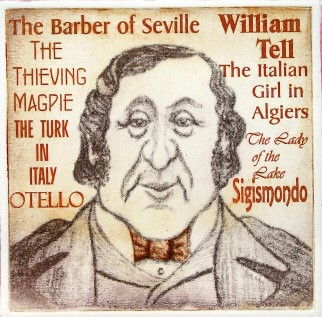 Gioachino Antonio Rossini was born into a family of musicians in Pesaro, a town on the Adriatic coast of Italy which was then part of the Papal States. His father, Giuseppe, was a horn player and inspector of slaughterhouses. His mother, Anna, was a singer and a baker’s daughter. Rossini’s parents began his musical training early, and by the age of six he was playing the triangle in his father’s musical group.

Rossini’s father was sympathetic to the French Revolution and welcomed Napoleon’s troops when they arrived in northern Italy. When Austria restored the old regime, Rossini’s father was sent to prison in 1799, where he remained until June 1800. Rossini’s mother took him to Bologna, making a living as leading singer at various theatres of the Romagna region. Her husband would ultimately join her in Bologna. During this time, Rossini was frequently left in the care of his aging grandmother, who had difficulty supervising the boy.

He remained at Bologna in the care of a pork butcher while his father played the horn in the orchestras of the theatres at which his wife sang. The boy had three years of instruction in the playing of the harpsichord from Giuseppe Prinetti, originally from Novara, who played the scale with two fingers only; Prinetti also owned a business selling beer and had a propensity to fall asleep while standing. These qualities made him a subject for ridicule in the eyes of the young Rossini. 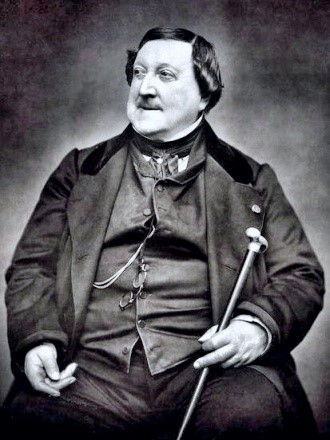 He was eventually taken from Prinetti and apprenticed to a blacksmith. In Angelo Tesei, he found a congenial music master, and learned to sight-read, play accompaniments on the piano and sing well enough to take solo parts in the church when he was ten years of age. Important products of this period are six sonate a quattro, or string sonatas, composed in three days, unusually scored for two violins, cello and double bass. The original scores, dating from 1804, when the composer was twelve, were found in the Library of Congress in Washington D.C. Often transcribed for string orchestra, these sonatas reveal the young composer’s affinity for Haydn and Mozart, already showing signs of operatic tendencies, punctuated by frequent rhythmic changes and dominated by clear, songlike melodies.

In 1805, he appeared at the theatre of the Commune in Ferdinando Paer’s Camilla, his only public appearance as a singer. He was also a capable horn player, treading in the footsteps of his father. Around this time, he composed individual numbers to a libretto by Vincenza Mombelli called Demetrio e Polibio, which was handed to the boy in pieces. Though it was Rossini’s first opera, written when he was thirteen or fourteen, the work was not staged until the composer was twenty years old, premiering as his sixth official opera.

In 1806, Rossini became a cello student under Cavedagni at the Conservatorio di Bologna. The following year he was admitted to the counterpoint class of Padre Stanislao Mattei (1750–1825). He learned to play the cello with ease, but the pedantic severity of Mattei’s views on counterpoint served only to drive the young composer’s views toward a freer school of composition. His insight into orchestral resources is generally ascribed not to the strict compositional rules that he learned from Mattei, but to knowledge gained independently while scoring the quartets and symphonies of Haydn and Mozart. At Bologna, he was known as “il Tedeschino” (“the Little German”) on account of his devotion to Mozart. 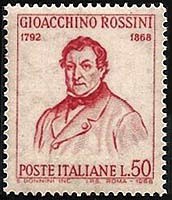 The resounding success of The Barber of Seville (1816)

Rossini’s most famous opera was produced on 20 February 1816, at the Teatro Argentina in Rome. The libretto, a version of Pierre Beaumarchais’ stage play Le Barbier de Séville, was newly written by Cesare Sterbini and not the same as that already used by Giovanni Paisiello in his own Barbiere, an opera which had enjoyed European popularity for more than a quarter of a century. Much is made of how quickly Rossini’s opera was written, scholarship generally agreeing upon two or three weeks. Later in life, Rossini claimed to have written the opera in only twelve days. It was a colossal failure when it premiered as Almaviva; Paisiello’s admirers were extremely indignant, sabotaging the production by whistling and shouting during the entire first act. However, not long after the second performance, the opera became so successful that the fame of Paisiello’s opera was transferred to Rossini’s, to which the title The Barber of Seville passed as an inalienable heritage.

Later in 1822, a 30-year-old Rossini succeeded in meeting Ludwig van Beethoven, who was then aged 51, deaf, cantankerous and in failing health. Communicating in writing, Beethoven noted: “Ah, Rossini. So you’re the composer of The Barber of Seville. I congratulate you. It will be played as long as Italian opera exists. Never try to write anything else but opera buffa; any other style would do violence to your nature.”

In Paris: the later years

His first wife died in 1845, and on 16 August 1846, he married Olympe Pélissier, who had sat for Vernet for his picture of Judith and Holofernes. Political disturbances compelled Rossini to leave Bologna in 1848. After living for a time in Florence, he settled in Paris in 1855, where he hosted many artistic and literary figures. Rossini had been a well-known gourmand and an excellent amateur chef his entire life, but he indulged these two passions fully once he retired from composing, and today there are a number of dishes with the appendage “alla Rossini” to their names that were either created by or specifically for him. Probably the most famous of these is tournedos Rossini, still served by many restaurants today.

In the meantime, after years of various physical and mental illnesses, he had slowly returned to music, composing obscure little works intended for private performance. These included his Péchés de vieillesse (“Sins of Old Age”), which are grouped into 14 volumes, mostly for solo piano, occasionally for voice and various chamber ensembles. Often whimsical, these pieces display Rossini’s natural ease of composition and gift for melody, showing obvious influences of Beethoven and Chopin, with many flashes of the composer’s long buried desire for serious, academic composition. They also underpin the fact that Rossini himself was an outstanding pianist whose playing attracted high praise from people such as Franz Liszt, Sigismond Thalberg, Camille Saint-Saëns and Louis Diémer.