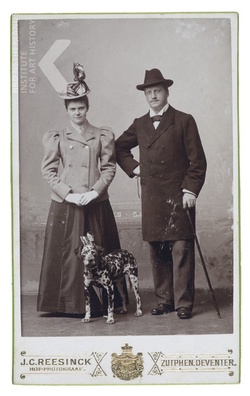 Board member of Toonkunst.

He was a gifted pianist, who already played Chopin when he could not reach the pedals with his feet. For decades he set the tone in the Amsterdam department of the Society for the Promotion of the Art of Music. At his funeral in 1930 spoke on behalf of his friends Dr. C.C. Delprat: “His great giftedness and his interest in art, for the music in particular, have been a blessing in his life. His great intellect and great workforce, the ability to express himself easily, the art of being something for everyone in life, his great knowledge of his business, his integrity, his qualities that meant he meant a lot to others. ” Jantje Toonkunst, as he was called, was in business. Together with a J. van Laer he had bought a trade in steel pipes and machines at the end of the last century, which in 1910, after a merger, was renamed Bernet & Co. Son Bram continued that business and the music played a major role with him. He was the founder of the Association of Donors of the Concertgebouw (now Friends of the Concertgebouw). At Bernet, now declared royal, until the sale to Hoogovens in 1971 also Bram’s son Jan.

Chairman of the ‘Management Committee’ at the Conservatory.