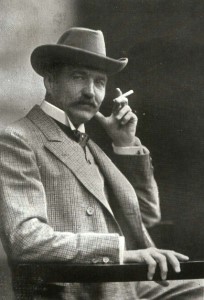 Jean Louis Nicodé was a Prussian pianist, composer and conductor.

He was born in Jersitz (Je?yce) (now part of Pozna?). He was initially taught by his father, an amateur violinist, pianist, conductor and composer. He entered the New Academy of Music in Berlin in 1869, where he studied piano under Theodor Kullak, harmony under Wüerst and counterpoint and composition with Kiel.

He became a teacher, and established the Nicodé Concerts. He accompanied Désirée Artôt on a concert tour of Galicia and Romania, then became professor at the Royal Conservatory in Dresden. In 1888 he devoted himself entirely to composition.

His works include Das Meer, Op. 31, a symphony for orchestra, organ, solo voices and men’s chorus. His Gloria, Op. 34 (1904), in six movements, for boy’s voice, men’s chorus, organ, harps, and very large orchestra occupies a whole evening in performance. His solitary symphony was not published. He wrote other orchestral works, a Romanze for violin and orchestra, two cello sonatas, piano pieces and songs.

He also arranged Chopin’s piano solo Allegro de Concert, Op. 46, for piano and orchestra. This followed his setting of the piece for two pianos.