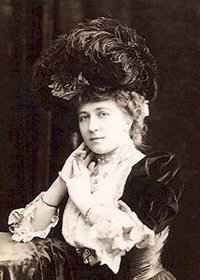 Johanna Gadski was a German soprano blessed with a secure, powerful, ringing voice, fine musicianship and an excellent technique. These attributes enabled her to enjoy a top-flight career in New York City and London, performing heavy dramatic roles in the German and Italian repertoires.

Gadski was born in Anklam, Prussia. After receiving a musical education in Stettin, she made her operatic debut in Berlin in 1889 in the role of Undine. Highlights of her subsequent career in Germany included appearances in Wagner’s works at the 1899 Bayreuth Festival and at the 1905/06 Munich Festival.

However, it was in English-speaking countries that Gadski built her international reputation as a diva. She made her successful American debut in New York in 1895 (with the Damrosch Opera Company) and became popular, too, in England. In 1896 she created the role of Hester Prynne in the fully staged premiere of Walter Damrosch’s opera The Scarlet Letter in Boston. She sang in London at the Royal Opera House, Covent Garden, in 1899, 1900, 1901 and 1906. Some sources credit her with appearing at England’s Worcester Festival but this is an error. Actually, she sang at America’s Worcester festivals, held in the American state of Massachusetts during the late 1890s.

Gadski was an extremely popular recitalist and, in 1899 to 1900, she capitalised on this business opportunity by embarking on a concert tour of the United States. She had also joined the star-studded roster of singers at the New York Metropolitan Opera, singing there from 1898 to 1904 and again from 1907 to 1917. Around 1902 she met Mabel Riegelman, a young soprano in San Francisco, and brought Mabel and her sister Ruby Riegelman (who was also her chaperone and accompanist) to Berlin in 1903 as her guest, then settling the two sisters in Stettin to continue their musical studies. In 1911 Gadski and Mabel Riegelman took the SS Kaiser Wilhelm II to New York City, where Gadski arranged for her star pupil Mabel Riegelman to debut as Gretel in Engelbert Humperdinck’s Hansel and Gretel. At the height of World War I, however, she was obliged to resign from the Metropolitan Opera because of her German links. Legend has it that she was deported from the United States as an alien enemy but this is not true. She spent the duration of the war living quietly in New York and Lake Spofford, New Hampshire, and did not revisit Germany until 1922.

After World War I

Gadski resumed her professional concert career in the United States in 1921. She did not return to the operatic stage, however, until the late 1920s; her first such appearance being in a 1928 production of Die Walküre mounted by the Washington National Opera, a semi-professional company not related to its present namesake. Thereafter, in the years 1929 to 1931, she toured as the star of the German Grand Opera Company. By this late date, however, her voice had been eroded by advancing age and strenuous use in her early years. A United States citizen since 1925, she was visiting Germany when she died in a car accident in Berlin in 1932.

During her prime, Gadski was particularly celebrated on both sides of the Atlantic as a Wagnerian singer; but she was equally splendid as a performer of the more taxing Italian operatic roles such as Aida by Verdi. She had a beautiful voice in her prime, with auditorium-filling high notes and a remarkably nimble technique for such a large vocal instrument. Gadski made numerous impressive recordings in the United States prior to World War I. These have been re-issued complete by Marston Records on two multi-disc sets of CDs. These sets also contain the Mapleson Cylinders of her voice that were cut live at the Metropolitan Opera during the opening years of the 20th century.