Josef Lhévinne (????? ??????????? ?????) was a Russian pianist and piano teacher. Lhévinne wrote a short book in 1924 that is considered a classic: Basic Principles in Pianoforte Playing. Asked how to say his name, he told The Literary Digest it was lay-veen.

Joseph Arkadievich Levin (the name was altered in western Europe by a manager who thought “Lhévinne” more distinctive and less Jewish) was born into a family of musicians in Oryol and studied at the Imperial Conservatory in Moscow under Vasily Safonov. His public debut came at the age of 14 with Ludwig van Beethoven’s Emperor Concerto in a performance conducted by his musical hero Anton Rubinstein. He graduated at the top of a class which included both Sergei Rachmaninoff and Alexander Scriabin, winning the Gold Medal for piano in 1892.

In 1898 he married fellow Moscow Conservatory student Rosina Bessie, also a pianist and winner of the Gold Medal for piano in her year, and the two began to give concerts together, a practice that lasted until his death. Faced with anti-semitism and the political turbulence of the period, they moved to Berlin in 1907 where Lhévinne gained a reputation as one of the leading virtuosi and teachers of his day. Trapped there as enemy aliens at the outbreak of World War I, having lost what money they had saved in Russian banks in the 1917 Revolution and unable to concertize due to the war, they endured years of considerable hardship surviving on the income from a handful of students.

At last free to leave Germany, in 1919 the couple moved to New York City, where Lhévinne continued his concert career and taught piano at the Juilliard School. Regarded as one of the supreme technicians of his day by virtually all of his more famous contemporaries (even Vladimir Horowitz admired his vast pianistic command), he never achieved their level of success with the public, perhaps because he made it look and sound so easy, but mostly because he enjoyed teaching more than performing. He settled into a life of concert tours and teaching which continued until his sudden death from a heart attack in 1944 a few days short of his 70th birthday. 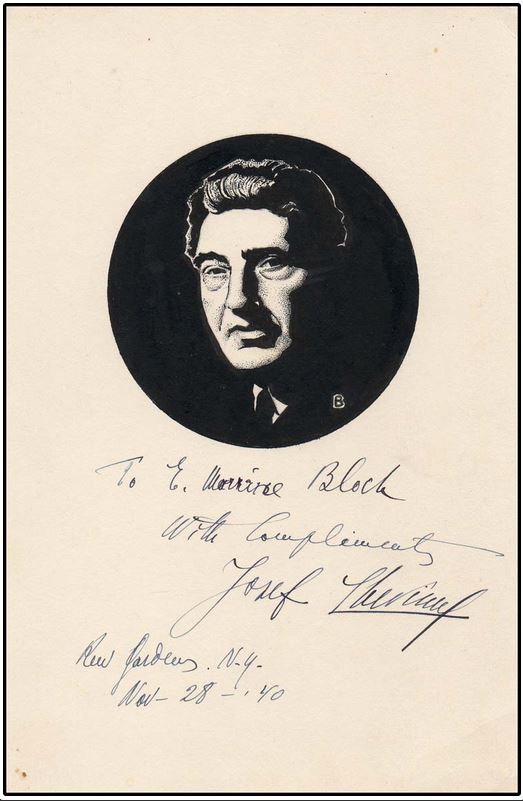 A spectacular and boldly signed original black ink portrait of the great pianist. Signed by the artist Maurice Block within the image and inscribed to him by Lhevinne: “To E. Maurice Block with Compliments / Josef Lhevinne / New Gardens, NY Nov 28 ’40.” In very fine condition and one of the rarest of all pianist autographs. 14.5 x 22.5 cm. The Russian-born Lhevinne was one of the greatest pianists of the Golden Age of piano, celebrated for his astounding technique, style and ease of playing. Married to pianist/teacher Rosina Lhevinne, the couple were famed teachers in New York City where they had their own music school and taught at Juilliard. In the words of Harold C. Schonberg: “His tone was like the morning stars singing together, his technique was flawless even if measured against the fingers of Hofmann and Rachmaninoff, and his musicianship was sensitive.”

He left only a handful of acoustic recordings which are truly breathtaking examples of perfect technique and musical elegance. The discs of Chopin Etudes Op. 25. Nos. 6 and 11 and Schulz-Evler’s arrangement of Johann Strauss II’s Blue Danube Waltz are legendary among pianists and connoisseurs. His piano roll of Schumann’s Papillons, Op. 2, is considered one of the definitive performances of that work. In the words of Harold Charles Schonberg: “His tone was like the morning stars singing together, his technique was flawless even if measured against the fingers of Hofmann and Rachmaninoff, and his musicianship was sensitive.” Lhévinne made a number of piano rolls in the 1920s for Ampico, a collection of which were superbly recorded and released on the Argo label in 1966. Lhévinne also recorded three times for the Welte-Mignon reproducing piano.