Julius Engelbert Röntgen was a German-Dutch composer of classical music.

He was born in Leipzig, Germany, to a family of musicians. His father, the Dutch born Engelbert Röntgen, was first violinist in the Gewandhaus orchestra in Leipzig; his mother, Pauline Klengel, was a pianist, an aunt of the renowned cellist Julius Klengel, born in 1859.

Julius was a gifted child. Neither he nor his sisters attended school; he was taught music by his parents and grandparents, and other subjects by private tutors. His first piano teacher was Carl Reinecke, the director of the Gewandhaus orchestra, while his early compositions were influenced by Reinecke, but also by Robert Schumann, Franz Liszt and Johannes Brahms.

In Leipzig, he and his parents were part of the musical circle around Heinrich von Herzogenberg, and it was at their house that he first met Brahms. Later Röntgen moved to Munich, where he studied piano under Franz Lachner, a friend of Franz Schubert. At the age of 18 he became a professional pianist. During a concert tour through southern Germany he became acquainted with the singer Julius Stockhausen; at this time he also met a Swedish music student Amanda Maier, whom he would marry in 1880.

In 1877 Röntgen had to make a decision whether to go to Vienna or Amsterdam. He chose Amsterdam, and became a piano teacher in the music school there. The aristocratic politician Alexander de Savornin Lohman, who was professor of law at the University of Amsterdam and an important figure in the cultural life of that city, was a friend of Röntgen’s father, and he promised to take young Julius under his wing. According to Röntgen’s letter of 1877 he considered the school “a place full of children and amateurs”; since the school was not supported by public funds, it appeared to attach more importance to the number of its students rather than their quality.

Between 1878 and 1885 Johannes Brahms (1833-1897) was a frequent visitor in Amsterdam. In 1887 Röntgen performed Brahms’s second piano concerto, conducted by the composer himself.

Röntgen also played an important part in establishing institutions for classical music in Amsterdam. In 1883, in association with composers Frans Coenen and Daniel de Lange, Röntgen founded the Amsterdam Conservatory. In 1884 Röntgen was heavily involved in the foundation of the Amsterdam Royal Concertgebouw. He applied for the position of the director; however, to his great disappointment, the choice fell instead on the German Hans von Bülow, as the committee seemed to doubt Röntgen’s abilities as a conductor. Nevertheless, Hans von Bulow (1830-1894) was not able to accept the appointment, and the position went in the end to the violinist Willem Kes (1856-1934). 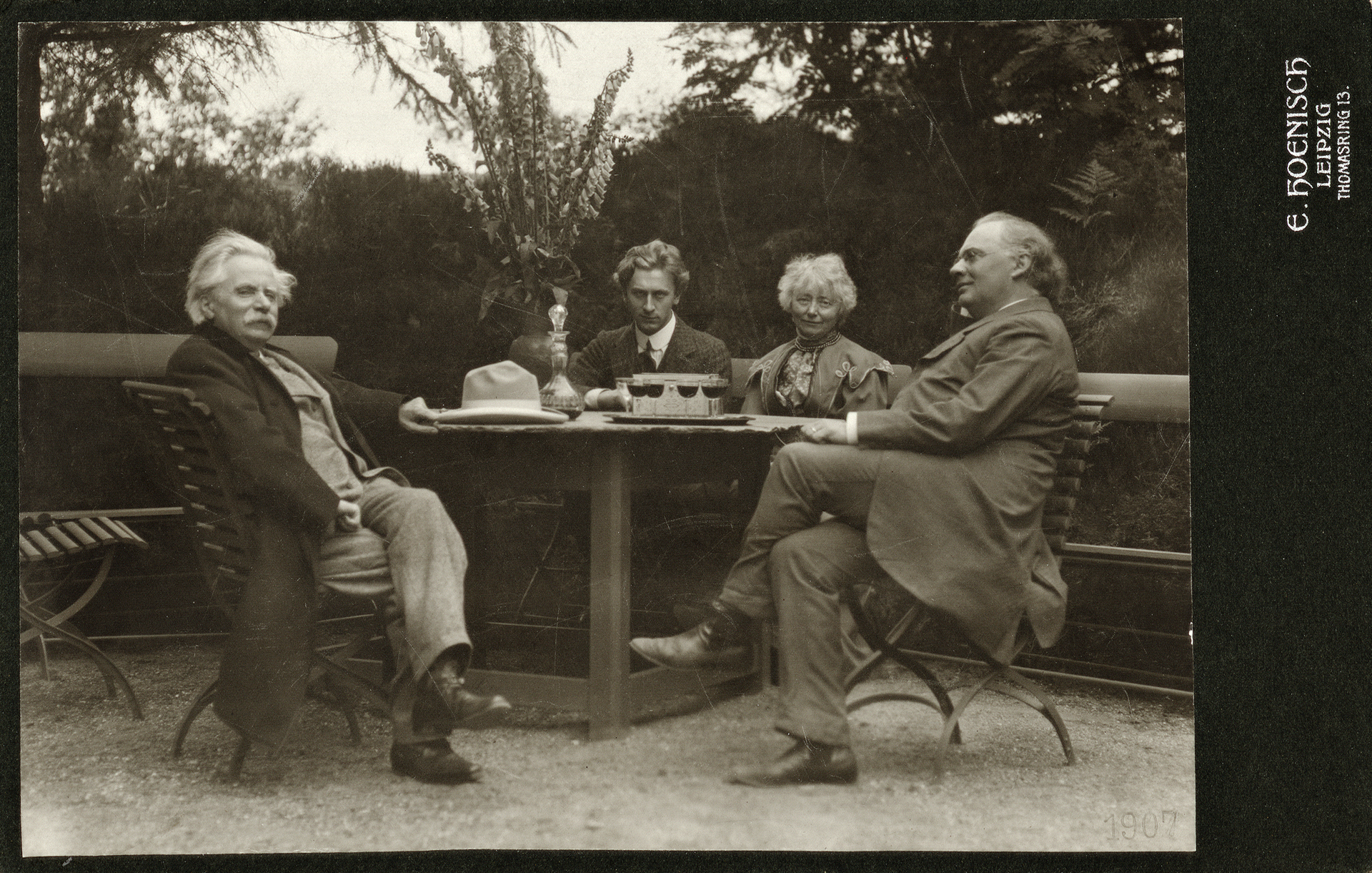 Röntgen turned with greater energy to composing chamber music and to his work for the Conservatory. He became a renowned accompanying pianist, working for the great violinist Carl Flesch, the singer Johannes Messchaert (1857-1922), and the cello player Pablo Casals. Travelling with Messchaert he came to Vienna at least once a year, where he would always meet Brahms.

During the quiet summer periods in Amsterdam, Röntgen and his family often went to Denmark. On one of such visit he met Bodil de Neergaard, with whom he struck up a close friendship. As a result of his close contacts with Denmark, Röntgen’s children became fluent speakers of Danish. 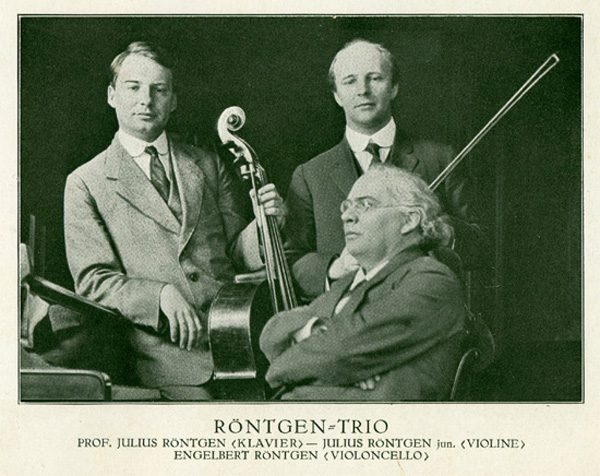 For some years, Röntgen and his sons performed together as a piano trio. After the death of his wife Amanda in 1894, Röntgen married the gifted piano teacher Abrahamina des Amorie van der Hoeven (Mien Rontgen). The children of the second marriage also became professional musicians. Röntgen’s son Joachim, a violinist, founded the Röntgen String Quartet.

At the end of the First World War, in 1919, Röntgen became a naturalized Dutch citizen. One of his sons was taken prisoner by the Germans during the war, while another son emigrated to the United States where he became a soldier in the US army. As a result, Röntgen was for many years unable to visit his native Germany.

In the years from 1920 on Röntgen experimented with atonal music; he wrote e.g. a bi-tonal symphony in 1930. Sometimes he performed as a piano accompanist in silent screen productions with popular and folk scenes of the film-maker Dirk van der Ven in the Tuschinski cinema theatre in Amsterdam. He had already published these popular and folk tunes in an earlier stage of his life. He also made many recordings on player piano rolls for the pianola.

In 1924 Röntgen retired from public life. He moved to Bilthoven, a small village near Utrecht. His son Frants, who followed a career in architecture, designed for him the country house Gaudeamus. The unusual round music room in that house was constructed in such a way that its floor did not touch the ground, but hung from the ceiling. During the last eight years of his life Röntgen wrote about 100 compositions, mostly chamber music and songs. Gaudeamus became a meeting place for many important composers and musicians; among the visitors in that house were Pablo Casals and Percy Grainger. At that time, Röntgen studied musical analysis and was interested in the work of Hindemith, Stravinsky, Schönberg, and Willem Pijper.

In 1930 Röntgen received an honorary doctorate from the University of Edinburgh, where his friend Donald Francis Tovey was professor. During this visit Tovey performed a new Röntgen symphony with the Reid Orchestra and Röntgen was the soloist in his most recent two piano concertos in the same programme. Two years after Röntgen’s death, Tovey described him as “one of the greatest masters of absolute music I have ever known”. After Second World War the villa Gaudeamus became the seat of the Gaudeamus society, whose aim is to promote contemporary Dutch music.

Röntgen died in a hospital in Utrecht, Netherlands on September 14, 1932. His last work, a piano quintet (his third for piano and strings, in G major) subtitled Sentendo nuova forza, is dated July 5 of that year.