Louise (Dilworth Beatty) Homer was an American operatic contralto who had an active international career in concert halls and opera houses from 1895 until her retirement in 1932. After a brief stint as a vaudeville entertainer in New England, she made her professional opera debut in France in 1898. She then became a member of the Metropolitan Opera from 1900 to 1919 and again from 1927 to 1929. She was also active as an opera singer in Boston, Chicago, and California. She recorded extensively for Victor Records and Columbia Records in the early decades of the 20th century. She was married to composer Sidney Homer for 52 years, and composer Samuel Barber was her nephew.

Homer sang a broad repertoire which encompassed works from the French, German, and Italian repertoires. She enjoyed particular success in the operas of Giuseppe Verdi and Richard Wagner. She often stated in interviews that her favorite role to perform was Amneris in Verdi’s Aida. At the Met she sang in several United States premieres and created roles in two world premieres: the witch in Engelbert Humperdinck’s Königskinder and the title role in Horatio Parker’s Mona. Soprano Nellie Melba once hailed her as “the world’s most beautiful voice”. In 1923 and 1924 she was listed as one of the 12 greatest living women by the National League of Women Voters.

Homer was born Louise Dilworth Beatty in Pittsburgh, Pennsylvania on April 30, 1871. Her father, Reverend William Trimble Beatty, was a Presbyterian minister who founded Pennsylvania Female College (now Chatham University). Her father initially expressed concerns over his daughter’s desired singing career for religious reasons, believing that such gifts were meant solely for worship within the church. However, Louise was eventually able to convince her father that she could employ her vocal gifts outside of the church without being in sin, at which point she was given permission to pursue a musical education. She began her vocal training in Philadelphia, but ultimately ended up in Boston.

In Boston Homer met composer Sidney Homer whom she married in 1895. They remained married until her death more than five decades later and had six children together, including authors Joy Homer and Anne Homer. Just months before her marriage, Homer made her stage debut in January 1895 in a vaudeville production at Keith’s Opera House in Providence, Rhode Island. The following February she appeared at the Bijou Opera House in Boston in the vaudeville show Our Uncle Dudley in a cast which also included Broadway star Marie Cahill and silent film actor and director Frank Currier. While further honing her craft, she spent the next few years performing periodically at functions organized by members of the elite society of Boston.

In 1898 Homer went to France to pursue studies in Paris with Fidèle König and Paul Lhérie. She made her professional operatic debut as Léonore in Donizetti’s La favorite at Vichy in 1898. The following year she performed at the Royal Opera House in London before going to Brussels where she was engaged at the Théâtre Royal de la Monnaie for eight months. 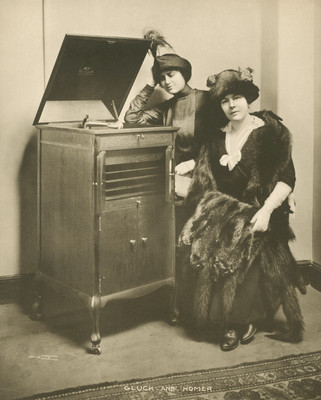 Homer made her American opera debut at the Metropolitan Opera in New York City in 1900 singing Amneris in Verdi’s Aida. She sang at the Met for 19 consecutive seasons, often singing opposite such acclaimed singers as Enrico Caruso, Geraldine Farrar, and Ernestine Schumann-Heink. At the Met, she created roles in two world premieres: the witch in Engelbert Humperdinck’s Königskinder (1910) and the title role in Horatio Parker’s Mona (1912). She also sang in the American premieres of Ignacy Jan Paderewski’s Manru (1902, Hedwig), Richard Wagner’s Parsifal (1903, the Voice from Above), Christoph Willibald Gluck’s Armide (1910, Hate), and Mussorgsky’s Boris Godunov (1913, as Marina with Arturo Toscanini conducting). She also sang Suzuki in the Met premiere of Puccini’s Madama Butterfly in the presence of the composer on February 11, 1907. She left the Met at the end of March 1919, but returned to the company in late 1927.

Homer sang a varied repertoire at the Met which encompassed parts from a variety of musical periods and languages. Some of the many roles she appeared in on the Met stage were Azucena in Il trovatore, Brangäne in Tristan und Isolde, Dalila in Samson and Delilah, Emilia in Otello, Erda in Siegfried, Fidès in Le prophète, both Flosshilde and Waltraute in Götterdämmerung, both Fricka and Schwertleite in Die Walküre, Laura in La Gioconda, Lola in Cavalleria rusticana, Maddalena in Rigoletto, Magdalene in Die Meistersinger von Nürnberg, Marguerite in La dame blanche, both Marta and Pantalis in Mefistofele, Mistress Quickly in Falstaff, Nancy in Martha, Naoia in Frederick Converse’s The Pipe of Desire, Orfeo in Orfeo ed Euridice, Ortrud in Lohengrin, the Second Lady in The Magic Flute, Siebel in Faust, Urbain in Les Huguenots, Ulrica in Un ballo in maschera, Venus in Tannhäuser, and the Witch in Hansel and Gretel. She also sang in numerous concerts at the Met, including as a soloist in performances of Handel’s Messiah, Rossini’s Stabat Mater, and Verdi’s Requiem. Her last performance with the company was as Amneris in November 1929.