In 1932, following the interment of Cardinal Innitzer, Alma gave a meal for several ecclesiastical dignitaries, including the good-looking theology professor Johannes Hollnsteiner, in his late thirties, and seen by many to be Vienna´s next cardinal. A very intense relationship developed from this encounter. Men had composed for Alma and painted for her, but never had a man said mass for her.

Alma Mahler fell in love with the 37-year-old theology professor and religious priest John Hollnsteiner, confessor of Schuschnigg, who saw a sort of new Luther in Hitler, and there was an affair between the two. In order to avoid the discovery of the liaison, Alma Mahler-Werfel even rented a small apartment in order to be able to meet. Franz Werfel emerged at the time when his books were burnt in Germany in the action directed by Joseph Goebbels against the un-German spirit. 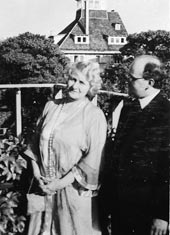 An especially close friend of Alma during the 1930s was Father Johannes Hollnsteiner, a professor of theology at the University of Vienna, whom she met in 1932, shortly after her re-conversion to Catholicism. (Alma, who was baptized a Catholic, had converted to the Evangelical Lutheran faith in 1900, at the time that her sister Grete had married the Protestant Wilhelm Legler (1875-1951); Alma’s father was Catholic and her mother was Protestant.) Hollnsteiner was the personal confessor of Schuschnigg and politically well connected. 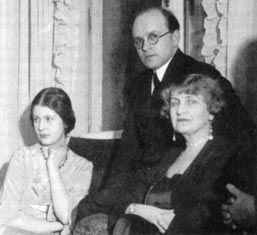 In 1935, the only 19-year-old Manon Gropius (1916-1935), the daughter of Alma Mahler (1879-1964) with Walter Gropius (1883-1969), died of paralysis. Alma Mahler-Werfel had traced the grace and beauty of the young girl, which was also guaranteed by other contemporaries, to the fact that she had begotten this child as the only one with an “Aryan”. Claire Goll, on the other hand, later contemptuously described her other children as “Mischlinge”. The funeral of the young Manon Gropius was a major event in Vienna. Johannes Hollnsteiner (1895-1971), the beloved of the mother, held the funeral speech, in which he spoke of an angel’s journey. 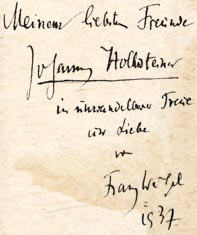