Nicolai, a child prodigy, was born in Königsberg, Prussia. He received his first musical education from his father, Carl Ernst Daniel Nicolai, who was also a composer and musical director. During his childhood his parents divorced, and while still a youth, early in June 1826, Nicolai ran away from his parents’ “loveless” home, taking refuge in Stargard with a senior legal official called August Adler who treated the musical prodigy like a son and, when Nikolai was seventeen, sent him to Berlin to study with Carl Friedrich Zelter.

After initial successes in Germany, including his first symphony (1831) and public concerts, he became musician to the Prussian embassy in Rome. When Giuseppe Verdi declined the libretto of Il proscritto by the proprietors of La Scala in Milan, it was offered instead to Nicolai. Later, Nicolai refused a libretto by the same author, and it went to Verdi, whose Nabucco was his first early success. All of Nicolai’s operas were originally written in Italian, the sole exception being his last and best known opera, The Merry Wives of Windsor, written in German. At one time he was more popular in Italy than Verdi himself was.

During the early 1840s, Nicolai established himself as a major figure in the concert life of Vienna. In 1844 he was offered the position, vacated by Felix Mendelssohn, of Kapellmeister at the Berlin Cathedral; but he did not reestablish himself in Berlin until the last year of his life. On 11 May 1849, two months after the premiere of The Merry Wives of Windsor, and only two days after his appointment as Hofkapellmeister at the Berlin Staatsoper, he collapsed and died from a stroke. On the very same day of his death, he was elected a member of the Royal Prussian Academy of Arts. 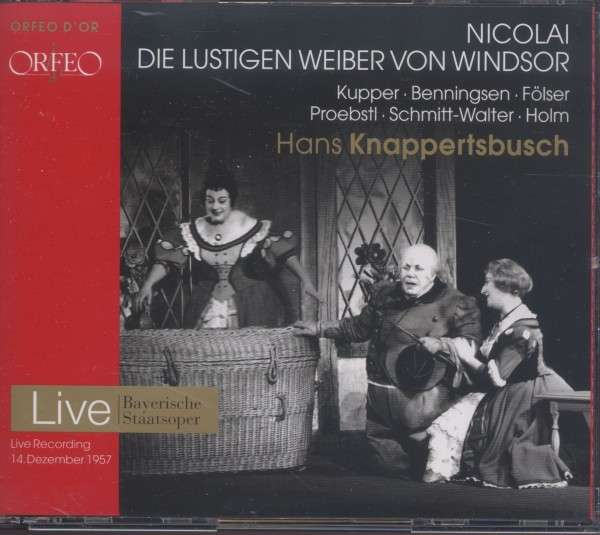