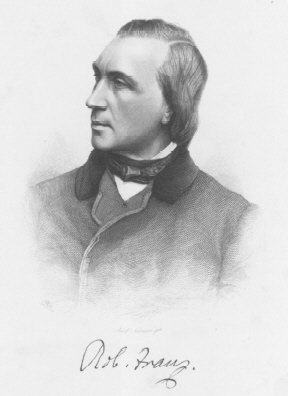 He was born Robert Franz Julius Knauth in Halle, Germany, the son of Christoph Franz Knauth. In 1847, Christoph Knauth adopted his middle name Franz as his new surname, and his son followed suit. He suffered in early life, as have many musicians, from the hostility of his parents to a musical career. He was twenty years old when his father’s animosity was conquered and he was allowed to live in Dessau to study organ playing under Friedrich Schneider. The two years of study under that famous teacher were advantageous chiefly in making him uncommonly intimate with the works of Bach and Händel, his knowledge of which be showed in his editions of the former’s St Matthew Passion, Magnificat and ten cantatas, and the latter’s Messiah, although some of these editions have long been controversial among musicians.

In 1843 he published his first book of songs, which was ultimately followed by some fifty more books, containing in all about 250 songs. In his native Halle he filled various public offices, including those of city organist as well as conductor of the Singakademie and the Symfonie. He also served as royal music-director and music master at the university. The first book of songs was warmly praised by Liszt and Schumann, the latter of whom wrote a lengthy review of it in Schumann’s paper, Neue Zeitschrift für Musik, which later was published separately. Deafness had begun to make itself apparent as early as 1841, and Franz suffered also from a nervous disorder which in 1868 compelled him to resign his offices. His future was then provided for by Franz Liszt, Joseph Joachim and others, who gave him the receipts of a concert tour amounting to some 100,000 marks.

In 1878 or 1879, he made an extensive search for Bach manuscripts in various towns, villages and country houses in Germany. Supposedly, he discovered a park surrounding Schloss Witzthun where young trees were being protected from their supporting poles by paper instead of the more normal cloth or leather. On examination, the paper turned out to be Bach manuscripts. After questioning the gardener, Franz found a trunk of them, including a number of violin sonatas. Although this account was printed in The New York Times, Franz declared it was “entirely untrue” and a statement was printed to that end later the same month.

In addition to songs, he set the 117th Psalm for double choir and wrote and a four-part Kyrie; he also edited Emanuele d’Astorga’s Stabat Mater and Francesco Durante’s Magnificat. He also transcribed Schubert’s String Quartet in D minor (“Death and the Maiden”) for piano duet (1878) and made arrangements of Mozart’s Quintets in C minor and C major. He died in Dessau.