When Mahler reached Vienna, the Emperor Franz Joseph was 67 years old and had reigned for almost fifty years. His was liberal, had a tolerant nature and hatred of anti-Semitism. Franz Joseph himself was a Catholic. The fact that he appointed a provincial Jew as the head of the most prominent cultural institution of the empire reveals an astonishingly liberal frame of mind. He also subsidized the Secession. 1897: The political decline of Vienna and the Austrian empire increased the Viennese taste for culture in general and for music in particular. Since the Austrian monarchy had abandoned most of its political ambitions and had lost face on the battlefield, the patriotic pride of the Emperor’s subjects took the form of a strong desire for artistic supremacy.

Franz Josef I, Emperor of Austria and King of Hungary was born on 18 August 1830, the eldest son of Archduke Franz Karl, the brother and heir of Emperor Ferdinand I. Franz Josef became heir-apparent after his father renounced his right to the crown, becoming Emperor of Austria in 1848 at the age of 18 following Ferdinand’s abdication towards the end of the Hungarian revolution of that year. Already in decline as a major power, with Franz Josef quickly losing the war with the French soon after his accession in 1848, Austria’s influence further declined throughout Franz Josef’s reign, for a variety of reasons.

Austria’s relationship with Russia was irreparably damaged as a consequence of Austria’s withholding of support during the Anglo-Russian Crimean War of 1853-56, a factor in the July Crisis of 1914. Ultimately Russia entered into an alliance with France and Britain ranged against Germany, Austria-Hungary and Italy, feeling no lingering loyalty to Austria-Hungary. In addition, Italy’s growing strength following its reunification led to the loss of almost all of Austria’s Italian possessions, including Lombardy and Venetia.

Finally, and perhaps most importantly, Germany’s rise to dominance following its successful war with Austria in 1866 and its reunification under Bismarck in 1871, rendered Austria the junior of the two Germanic powers. Meanwhile, Franz Josef had to deal with Hungary’s growing demands for autonomy. After negotiation, the two nations agreed to create a dual monarchy in which both were equal partners; the empire of Austria-Hungary was therefore established in 1867. Franz Josef was its monarch, serving alongside his wife Elisabeth whom he married in 1853 (and who was regarded by many Hungarians as their true monarch). Elisabeth played a role in the discussions that resulted in the shared power arrangements. 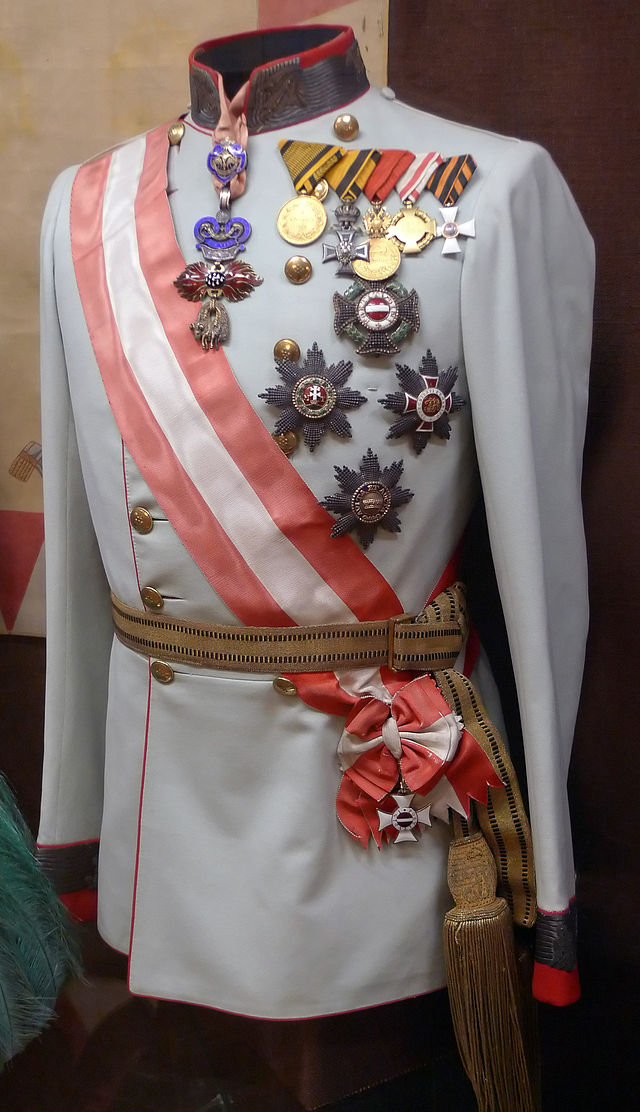 Under the terms of the compromise agreement Hungary retained control of its own internal affairs. In matters pertaining to foreign affairs the two countries would act together. Now that he served as dual monarch, Franz Josef announced his intention of granting a form of self-government to Austria’s Slav population. However he was frustrated in this by the German and Magyar politicians who effectively ran the empire, and who adamantly opposed any extension of power-sharing to include the Slavs.

Franz Josef’s failure to enact change led to increased dissatisfaction among Austrian Czechs and Serbs, as well as causing a further straining of relations with Russia, the natural champion of the Slav peoples. Tragedy struck Franz Josef’s immediate family in the 1880s and 1890s. His only son, Archduke Rudolf, committed suicide in 1889. His brother, Karl Ludwig, died in 1896 from an illness incurred from drinking infected water during a pilgrimage to the Holy Lands. Finally his wife, Elisabeth, was assassinated in Geneva in 1898 by an Italian anarchist.

The issue of succession to Franz Josef’s throne was complex. With Rudolf’s suicide, next in line for the succession was Franz Josef’s younger brother Maximilian. He had however been shot by a Mexican firing squad in 1867 following an unsuccessful three-year reign as Emperor of Mexico. Therefore his dead brother Karl Ludwig’s eldest son, Franz Ferdinand, emerged as heir. Franz Josef had little affection for Franz Ferdinand, disapproving of the man himself, and of his marriage to Sophie Chotek von Chotkova, whom he considered below Ferdinand’s rank. Ferdinand’s marriage only went ahead after he agreed to renounce all rights of his children to succeed him as Emperor; even this agreement was extracted from Franz Josef following representations by the German Kaiser, Wilhelm II, and the Russian Tsar, Nicholas II.

Even so, he neither attended Ferdinand’s marriage nor, following his assassination in Sarajevo on 28 June 1914, his funeral. Despite his dislike of Archduke Franz Ferdinand, Franz Josef accepted the advice of his foreign minister, Leopold von Berchtold, in first issuing an unacceptable ultimatum to Serbia, and then declaring war after Serbia quibbled with one of Austria-Hungary’s demands. Franz Josef left the conduct of the war strictly to his military officials, although by 1916 he believed victory to be impossible and the break-up of his empire likely. The last significant Habsburg monarch, remaining popular to the end of his life, Emperor Franz Josef died on 21 November 1916 after reigning for 66 years. His grand-nephew, Karl I, assumed the throne until 1918 as the last Habsburg monarch.