Paul Thomas Mann was a German novelist, short story writer, social critic, philanthropist, essayist, and the 1929 Nobel Prize in Literature laureate. His highly symbolic and ironic epic novels and novellas are noted for their insight into the psychology of the artist and the intellectual. His analysis and critique of the European and German soul used modernized German and Biblical stories, as well as the ideas of Goethe, Nietzsche and Schopenhauer.

Mann was a member of the Hanseatic Mann family and portrayed his family and class in the novel Buddenbrooks. His older brother was the radical writer Heinrich Mann and three of his six children, Erika Mann, Klaus Mann and Golo Mann, also became important German writers. When Hitler came to power in 1933, Mann fled to Switzerland. When World War II broke out in 1939, he moved to the United States, returning to Switzerland in 1952. 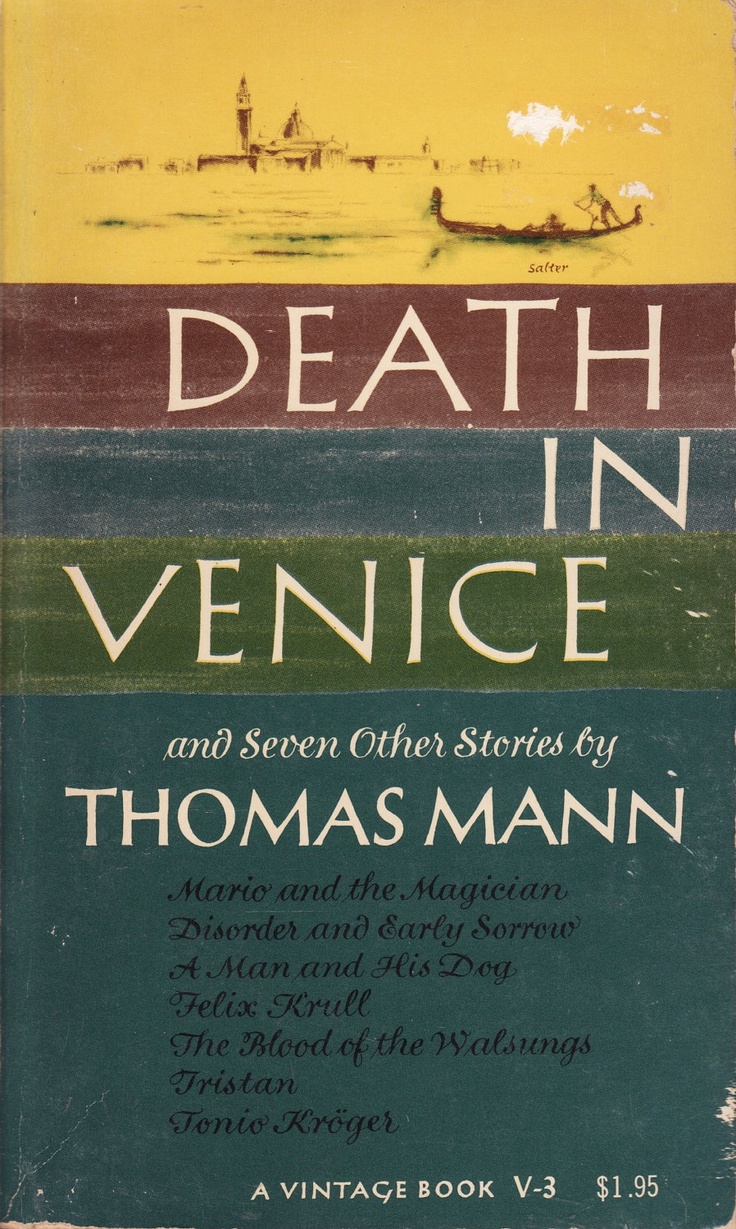 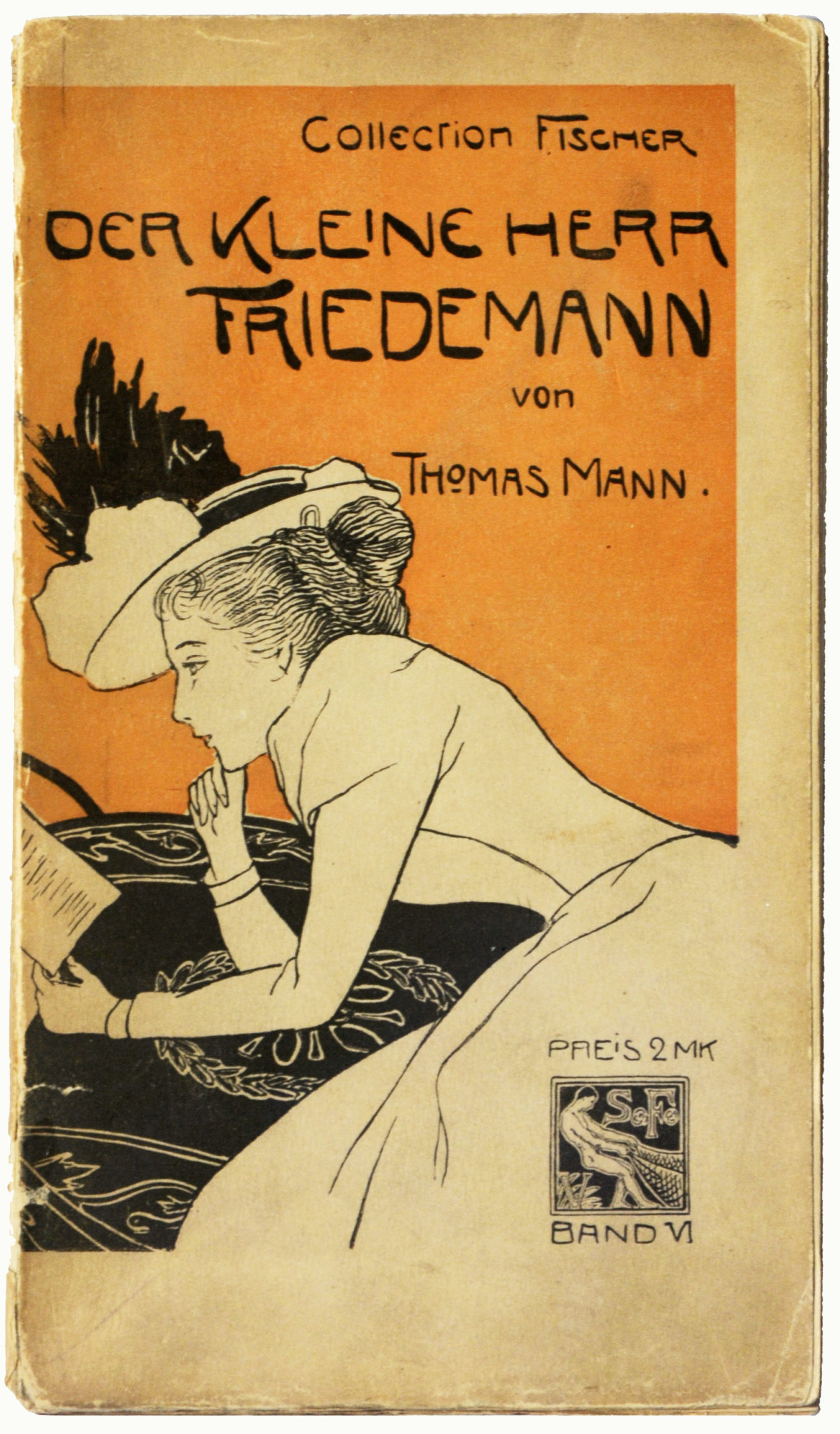 Thomas Mann gave the hero of his novella “Death in Venice” Gustav Mahler’s traits – now the composer’s only letter to Thomas Mann has appeared.

Gustav Mahler’s last concert in Munich, the world premiere of the Eighth Symphony on 12-09-1910, brought him the greatest success of his career. Thomas and Katia Mann were also invited to the splendid party in the hotel “Vier Jahreszeiten”. Apparently, however, there was no personal exchange between the author of the “Buddenbrooks” and the celebrated composer and conductor on that festive occasion.

Instead, two days later, along with a copy of his novel, “Royal Highness,” Thomas Mann sent a formal homage letter. He believed, he affirmed, that in the worshiped person embodies “the most serious and holy artistic will of our time”. This explains that he thought it best to give his fictive alter ego, “The Death in Venice”, the writer Gustav von Aschenbach, the “Mask of Mahler,” the first name and the approximate age.

No one could suspect of the Mahler factor in the genesis of “Death in Venice”. Nor did any of the early reviewers think of connecting the artist heroes of the novella with Gustav Mahler. Experienced in the fine art of reception control, Thomas Mann decided to draw attention to this at the next opportunity. This happened in 1921 in the “Foreword to a Picture Portfolio” by Wolfgang Born, who had submitted nine colored lithographs to the “Venice” novella. Here he explained that Aschenbach wisely “wears the mask of Mahler”.

We can only speculate what motivated him to do so. Presumably he was anxious not only to be perceived as a ambivalent Wagnerian or as a propagandist Hans Pfitzners. The specific reference to his esteem by Gustav Mahler and its significance for the “Venice” novella could counteract this to some extent by correcting it. So far it was not known that Mahler responded to Mann’s homage.

One could assume, however, that the author had received word of Mahler’s esteem, because in the “Considerations of a Non-Political” he writes that his stories and novels are good “scores” that are appreciated by musicians. With striking certainty he adds: “Gustav Mahler, for example, loved her.”

How could he know that? This question can now be answered on the basis of a letter discovered by the opera and concert singer Frauke May-Jones in the Thomas Mann Archive in Zurich. It is Mahler’s only letter to Thomas Mann. Mahler had traveled to America at the end of October 1910 for his fourth season in New York. It should be his last. Shortly after arrival he wrote on the stationery of the hotel, where Alma and Gustav Mahler occupied a suite, the Hotel Savoy, the following letter of thanks.

I have to be ashamed of your dear lines and beautiful mission for a long time. And I could not understand it either, for I was most cordially pleased if I did not know from experience that the recipient has just got worse than the giver. It is often hard to find something worthwhile in the moment. And your dear words demanded a more significant response than such a fleeting greeting. On my journey across the Atlantic Ocean, I remembered my pupil greatly, for that was where I gradually came to know your books, which had become very valuable to me; and also this last one I had saved for this year’s journey. – Be thanked at the same time as a poet and as a friend (the former, by the way, always means the second for me) – I know that my silence is not interpreted differently, and if our paths intersect again, I hope that we will not Passing each other in as fast as 2 times (too often for such a short journey). Sincerely greet you from your adoring 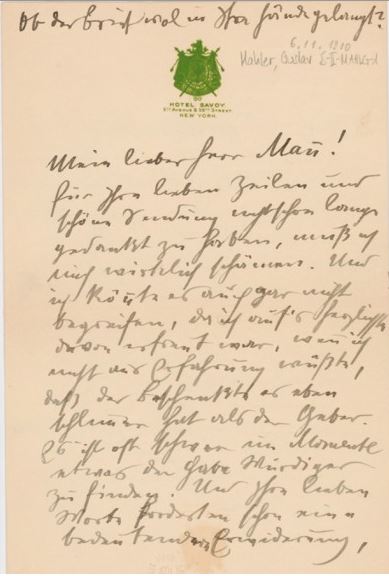 The “student” mentioned by Mahler is Klaus Pringsheim (1883-1972) (called “Kaleschlein”), Thomas Mann’s brother-in-law, who had learned his trade as a conductor from March 1906 to summer 1907 under Mahler at the Vienna Court Opera. He was the decisive link between Mahler and the author of the “Venice” novella. The other meeting, to which Mahler recalls, took place on 27-10-1908, likewise in “Vier Jahreszeiten,” after the German premiere of the Seventh Symphony in the Odeon. The only evidence of this is provided by the diary Hedwig Pringsheim, the mother of two twins Katia and Klaus Pringsheim.

Mahler’s letter is undated. After identification of the postmark, he was sent on 06-11-1910. Before Mahler put the letter in the envelope, he wrote on the top of the first sheet, above the letterhead: “Would the letter be in your hands?” And on the envelope he wrote: “Please send!” His concern is understandable, because he addressed the letter to the “Landhaus Thomas Mann” in Bad Toelz, from where he had received Mann’s shipment. He suspected that the author was not there at this time of the year. The letter was correctly forwarded to his new Munich address in the Mauerkircherstraße.

In the concern of the seriously ill composer that his letter really came into Thomas Mann’s hands, a faint inkling of his approaching end is also likely to resonate, in connection with the hope that it might come to another meeting, “when our ways come again cross once “.

Their paths did not intersect again. Gustav Mahler died on 18-05-1911 in Vienna. Thomas and Katia Mann, at the time on the island of Brioni in the Adriatic, followed the newspaper reports on the health of the former opera director with the utmost concern. Shortly after the death of the revered composer and conductor, the Manns changed their holiday quarters and went to Venice, to the Hotel des Bains on the Lido. There the prehistory of the novel “Death in Venice” entered its last phase. She was overshadowed by the shock of Mahler’s death – a grief that trembles in the last sentence of the novella: “And that same day a respectfully shaken world received the news of his death.”