Tilly (Mathilde Caroline) Koenen born at the isle of Java in Salatiga. Familiar with the language she liked to sing Malay songs. Already in 1906 she performed Malay songs written down by Indisch composer Constant van de Wall in Berlin. These ‘Maleische liederen’ she also performed later in all major cities in Europe.

She made her debut in Berlin, where she followed her teacher – the famous contralto and singing-pedagogue Cornélie van Zanten. She made quickly furore in Germany and the Netherlands and sang a.o. for the German Kaiser and at the Dutch Court. After very successful concert-tours through Middle-Europe, she settled down in London. In 1909 and 1910 she made concert-tours through the U.S. and Canada, where she also appeared in oratorio. Only once she sang in an opera – Orpheus – under the baton of Cornélie van Zanten in Amsterdam. 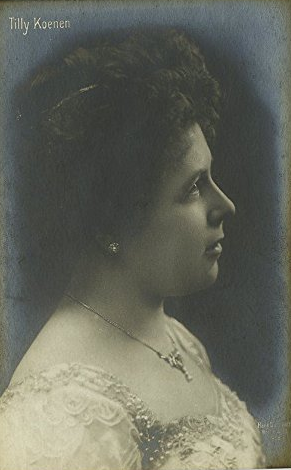 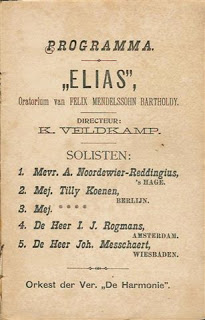