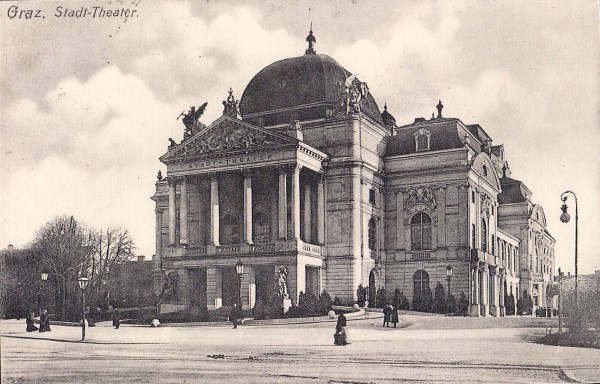 Graz Opera (German: Oper Graz) is an Austria opera house and opera company based in Graz. The orchestra of the opera house also performs concerts as the Graz Philharmonic Orchestra (Grazer Philharmonisches Orchester).

Opera had been performed in Graz since the 17th century, originally in a converted coach house on the Habsburg royal estates. The National Theatre (Schauspielhaus Graz), constructed in 1776, saw many early performances of Mozart’s operas, although today (after many reconstructions) it is devoted to the performances of plays.

The city’s first dedicated opera house and the immediate predecessor of the Graz Opera was the Thalia Theatre, adapted in 1864 from an old circus hall. Plans for a new theatre suitable to the growing size and importance of the city and intended to be a “new home for German art” were first proposed in 1887.

Designed by Ferdinand Fellner and Herman Helmer in the neo-baroque style, the Graz Opera was inaugurated in 1899 with a performance of Schiller’s play William Tell, followed a few days later by Wagner’s opera Lohengrin. The building suffered damage during World War II bombings but was repaired and re-opened after the war.