By the end of the Ottoman occupation in 1686, Pest, a mostly Magyar-inhabited market town at the meeting point of important trade routes, lay in ruins, but in a few decades it regained strength. At that time, the stern stone blocks of a redoubt for the defence of the city stood in the area of today’s Vigadó tér, which was on the northern boundary of Pest.

In 1789 the redoubt was demolished so as to be replaced by a theatre building, however , it was not built for quite a while due to lack of funds. The Pest public nevertheless, did not cease demanding a ballroom, and, so, finally, Mihály Pollack was commissioned to start construction in 1829. This building, the predecessor of today’s Vigadó, proved to be one of the finest pieces of neoclassical architecture in Pest, and it came to be called the Redoute.

Ballroom into a treasure house of culture

The Redoute was opened in January 1833 with a grand ball, yet, for all merriments, it was also a venue of the highest culture – the only concert hall in Pest at the time. Both Johann Strauss the Elder and the Younger and Ferenc Erkel (1810-1893) performed here several times. It was also here that Ferenc Liszt gave the first concert after the great flood of 1838 for charity. The Redoute however was to have a short career; in May 1849, it fell victim to the the artillery fire of the invading Austrian troops. In 1859 Frigyes Feszl was commissioned to design a new building, with which he sought to create a Hungarian style. The new edifice, now called Vigadó, was opened in 1864.

The façade of the palace is decorated by the Hungarian Coat of Arms and the likenesses of outstanding figures in Hungarian history. The pillar statues were sculpted by Károly Alexy. The frescos inside the building were painted by Károly Lotz and Mór Than. The latter’s painting entitled Attila’s Feast was the first artwork to have been based on János Arany’s epic poem, Death of Buda (1863). After the Austro-Hungarian Compromise of 1867, the city leased the Vigadó, which then hosted a variety of programmes, including city council meetings.

The Appeal of the Vigado

Two or three decades following its opening, the Vigadó had a busy schedule of balls. Its managers thought up all kinds of ways to make their programme stand out among others. They thus put up ice balls, fancy-dress parties with characters from the novels of Mór Jókai or pageants of the events of Hungarian history. The most luxurious ball to be hosted at the Vigadó was the one organized by the National Rowing and Sailing Association in 1870, with a rich order of dances, lavish props, a sailor-suit military band, and a goldfish pool.

The most noteworthy ball was the one commemorating István Széchenyi, known in Hungary as “the greatest Hungarian”. In 1867 Emperor Franz Joseph attended the banquet hosted by the Vigadó in honour of his coronation, and it was also here that Budapest was born by the merger of the old cities of Pest, Buda and Óbuda (old Buda).

The Vigadó also developed a rich concert life. Ferenc Liszt was soon to return to its concert hall, when he was invited to conduct his oratorio, The Legend of St Elisabeth on the occasion of the 25th anniversary of the Pest-Buda Conservatory. The five-hundred-strong choir came together from various Pest and rural choral societies. The Vigadó hosted the first all-Liszt concert in Hungary in 1869, and it was here that he conducted the premier of the orchestral versions of Mihály Vörösmarty’s great poem “Appeal” and the Hungarian National Anthem, Ferenc Kölcsey’s “Hymn”.

At the Vigadó celebration of his half-century artistic career, Liszt was presented with a gold laurel wreath and a number of foreign awards, including honorary membership of the St Petersburg Academy of Music. In 1875 Liszt and Wagner co-organized a concert to raise funds for the construction of the Bayreuth Theatre (Festspielhaus). 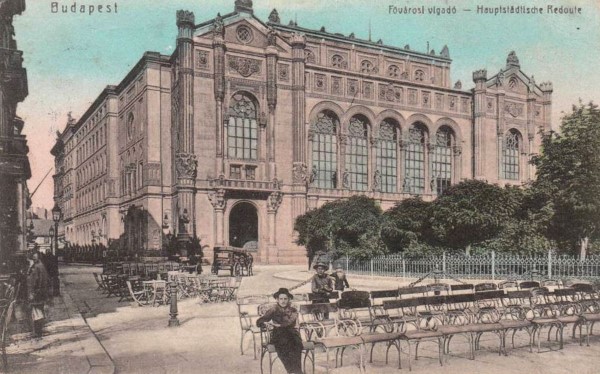 The Vigadó also hosted performances by the likes of Johann Strauss Jr., Mascagni, Dvo?ak, Debussy, and Arthur Rubinstein. Ern? Dohnányi had his first solo concert here. Béla Bartók and Annie Fischer made their debuts here in 1905 and 1932 respectively. Richard Strauss conducted from the rostrum of the Vigadó several times, and Prokofiev also appeared on its stage as a pianist.

From among the Hungarian conductor celebrities, János Ferencsik conducted the Philharmonic Orchestra for the first time here in 1938. The last foreign guest conductor to appear here before the end of the war was Herbert von Karajan in 1944.

Beside classical music, jazz had also founds its way into the Vigadó programme. Teddy Sinclair conducted the Savoy Orphée band with a flashlight as a baton in 1928, and an outstanding twenty-four-piano jazz concert was organized here by the Saxon Concert Office in the spring of 1937.

The building of the Vigadó was seriously damaged in World War II, and again its future was called into doubt. Experts rallied to save it, this “the unique masterpiece of romantic architecture conceived in the revolutionary spirit of the struggle for freedom”. Finally, in 1954 the Vigadó building was declared a National Monument, and the authorities permitted its reconstruction in the late fifties. However, János Kádár and his accolades declared several times that the money would be better spent on building schools.

Finally, in 1968, construction work started with several of its parts demolished for complete transformation. To improve acoustics, prism lamps in a plaster casing were affixed to the ceiling, lowering headroom by five metres. 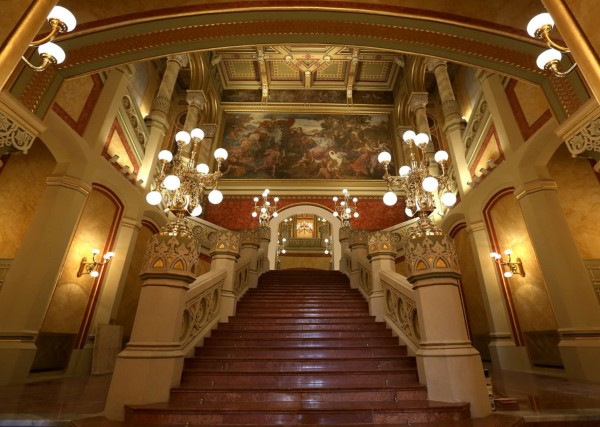 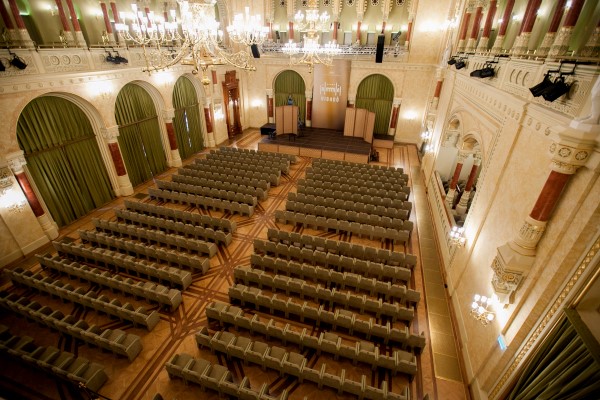 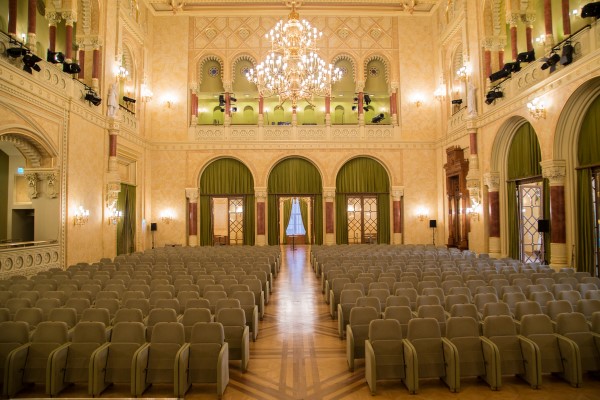 The rebuilt Vigadó was opened to the public on 15 March 1980. Contemporary artists were in need of a new exhibition space because the National Salon in Erzsébet tér had been pulled down in 1960. The Vigadó Gallery fulfilled this role, hosting many exhibitions by contemporary artists, including Béla Czóbel, Gyula Hincz, Ferenc Martyn, Ödön Márffy, Jen? Szervátiusz, and Menyhért Tóth.