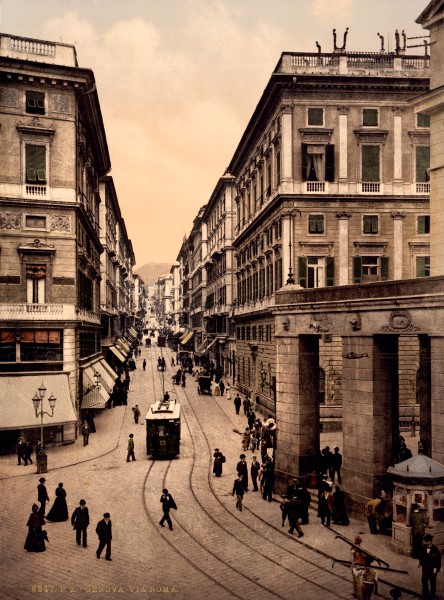 Located on the Gulf of Genoa in the Ligurian Sea, Genoa has historically been one of the most important ports on the Mediterranean. Genoa has been nicknamed la Superba (“the proud one”) due to its glorious past and impressive landmarks.

The city of Genoa covers an area of 243 square kilometres (94 sq mi) between the Ligurian Sea and the Apennine Mountains. The city stretches along the coast for about 30 kilometres (19 mi) from the neighbourhood of Voltri to Nervi, and for 10 kilometres (6.2 mi) from the coast to the north along the valleys Polcevera and Bisagno.

Genoa’s historic centre is articulated in a maze of squares and narrow caruggi (typical Genoese alleys). It joins a medieval dimension with following 16th century and Baroque interventions (the ancient Via Aurea, now Via Garibaldi).

Near Via Garibaldi, through the public elevator “Castelletto Levante”, you reach one of the most scenic places in the city, Belvedere Castelletto. The centre of Genoa is connected to its upper part by ancient paths caught between tall palaces, called “Creuze”. Walking along these small paths you can reach magnificent places like the “Santuario di Nostra Signora di Loreto”. Very beautiful is the upper ring road so-called “Circonvallazione a Monte” that includes: Corso Firenze, Corso Paganini, Corso Magenta, Via Solferino, Corso Armellini.

San Lorenzo cathedral has a splendid portal and the dome designed by Galeazzo Alessi. Inside we find the tresaure of the Cathedral where among other objects there is also what is said to be the Holy Chalice.

Genoa was a centre of Occitanie culture in Italy and for this reason it developed an important school of Troubadours: “Lanfranc Cigala”, “Jacme Grils”, “Bonifaci Calvo”, “Luchetto Gattilusio”, “Guillelma de Rosers”, “Simon Doria”.

Alessandro Stradella, a composer of the middle baroque, lived in Genoa and was assassinated in 1682.

“Felice Romani” was a poet who wrote many librettos for the opera composers like Gaetano Donizetti and Vincenzo Bellini. “Giovanni Ruffini” was another poet known for have written the libretto of the opera Don Pasquale for its composer. In 1847, Goffredo Mameli and Michele Novaro composed, Il Canto degli Italiani.

In 1857, debuts the work of Giuseppe Verdi entitled Simon Boccanegra inspired by the first Doge of Genoa, Simone Boccanegra. Genoa is also the birthplace of the condcuctor Fabio Luisi and of many opera singers like “Giuseppe Taddei”, “Margherita Carosio”, “Luciana Serra”, “Daniela Dessì”

The Teatro Carlo Felice, built in 1828 in the city in the Piazza De Ferrari, and named for the monarch of the then Kingdom of Sardinia (which included the present regions of Sardinia, Piedmont and Liguria). The theatre was the centre of music and social life in the 19th century. On various occasions in the history of the theatre, presentations have been conducted by “Mascagni”, “Richard Strauss”, “Hindemith” and “Stravinsky”. Other Genoese theaters are the “Politeama Genovese”, “Teatro Stabile di Genova”, “Teatro della Tosse” and “Teatro Gustavo Modena”.

On the occasion of the Christopher Columbus celebration in 1992, new musical life was given to the area around the old port, including the restoration of the house of Paganini and presentations of the Trallalero, the traditional singing of Genoese dock workers.

The Trallalero, traditional music in Genoese dialect is a polyphonic vocal music, performed by five men and several songs. The Trallalero are ancient songs that have their roots in the Mediterranean tradition. Another aspect of the traditional Genoese music is the Nostalgic Song, the principal authors and singers of the Nostalgic Song in Genoese dialect are: Mario Cappello who wrote the piece “Ma se ghe penso” (English: “But if I think about it”), a memory of Genoa by an emigrant to Argentina, Giuseppe Marzari, Agostino Dodero up to I Trilli, Piero Parodi, “Buby Senarega”, Franca Lai.

The traditional Neostalgic Song will have a great influence on the so-called Scuola Genovese of singer-songwriters that in some cases will mix the nostalgic feeling with Pop and Jazz atmospheres.

Genoa has left an extraordinary impression on many noted personalities. Friedrich Nietzsche loved Genoa and wrote some of his works there. Sigmund Freud and Ezra Pound lived near Genoa in Rapallo. Anton Chekhov said that Genoa “is the most beautiful city in the world,” and Richard Wagner wrote:”I have never seen anything like this Genoa! it is something indescribably beautiful”.