The Hilversum Radio Philharmonic Orchestra (RPO) (in Dutch: Radio Filharmonisch Orkest (RFO)) is a Dutch radio orchestra, based in Hilversum.

The RPO performs on NPO Radio 4 and gives public concerts in Amsterdam and Utrecht. It has also served as the orchestra for productions at De Nederlandse Opera. The RPO’s programmes are decided by the above-mentioned Muziekcentrum, rather than directly by the orchestra’s management and chief conductor. The current manager of the RPO is Wouter den Hond.

Albert van Raalte founded the orchestra in 1945 and served as its first chief conductor. Past chief conductors have included Paul van Kempen, Bernard Haitink (1929), Jean Fournet, Willem van Otterloo, Hans Vonk, and Sergiu Comissiona. Edo de Waart was chief conductor of the RPO from 1989 to 2004 and is now its conductor laureate. 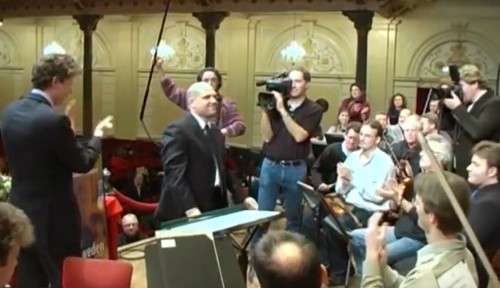 On 07-11-2003 contract signing was held in the Amsterdam Concertgebouw by the future chief conductor of the RPO/RFO: Jaap van Zweden (1960). The event took place on the stage of the Grote Zaal, following a camera ceremony, and was attended by the press and other guests.

As an introduction to the ceremony, brass players and percussionists, led by assistant conductor Benjamin Wallfisch, played the Fanfare for the ‘coming’ Man by Aaron Copland. After several introductory words from orchestra manager Stefan Rosu, Van Zweden signed the agreement that connected him to the orchestra as chief conductor from 01-01-2005. Then he was festively addressed by the chairman of the orchestra committee Ronald Kok. The official part was completed with the unveiling of a life-sized poster welcoming the new chef. 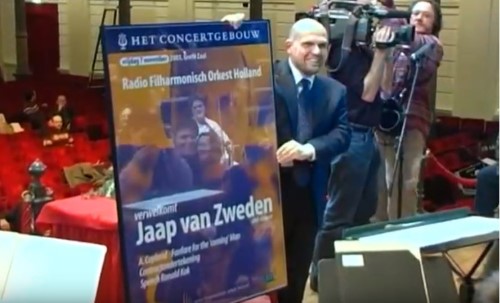 Jaap van Zweden was chief conductor and artistic director of the RPO from 2005 to 2012, and now has the title of honorair gastdirigent (honorary guest conductor, or principal guest conductor). In August 2010, the RPO announced the appointment of Markus Stenz as its eighth chief conductor, effective from the start of the 2012-2013 season, with an initial contract of three years.

In October 2010, the coalition Dutch government announced plans for complete defunding of the Muziekcentrum van de Omroep by the year 2012, with the potential threat of the dissolution of the RPO. After protests, the Dutch Minister of Education, Culture and Sciences Marja van Bijsterveldt announced in December 2010 a partial restoration of funds to the NMBC at a level of €12 million-14 million. In December 2012, the RPO named Bernard Haitink as its patron, following his advocacy for the orchestra in the wake of the proposed defunding.