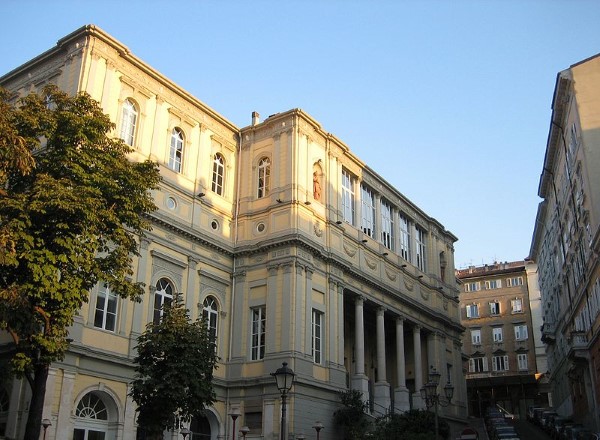 Commissioned by a public limited company made of important representatives of Trieste’s business and economic world and chaired by Baron Emilio de Morpurgo, the new theatre was designed in 1877 by architect Nicolò Bruno (1833-1899) from Liguria, and it was realised in less than one year.

The inauguration took place on 27th of April 1878 with the “Ballo in maschera” (A Masked Ball) by Verdi and the ballet “Pietro Micca”.

The theatre in eclectic style – dedicated to Count Domenico Rossetti de Scander, illustrious jurist and historian – was immediately appreciated for its enormous number of seats (5,000 among the parterre, the boxes and two levels of galleries), the beauty of the hall, the foyer and the opening cupola.

Even though the theatre was provided with a stage that could host different kinds of shows, musical events originally prevailed (opera, symphonic music and operetta), and it hosted great composers and conductors such as Richard Strauss (1903), Gustav Mahler (1905), Pietro Mascagni (1908), Arturo Toscanini (1920), Franz Lehar (1927).

The Rossetti theatre is located just before the hill on Viale XX Settembre, compelling the architect to design the main façade to follow a steep slope.