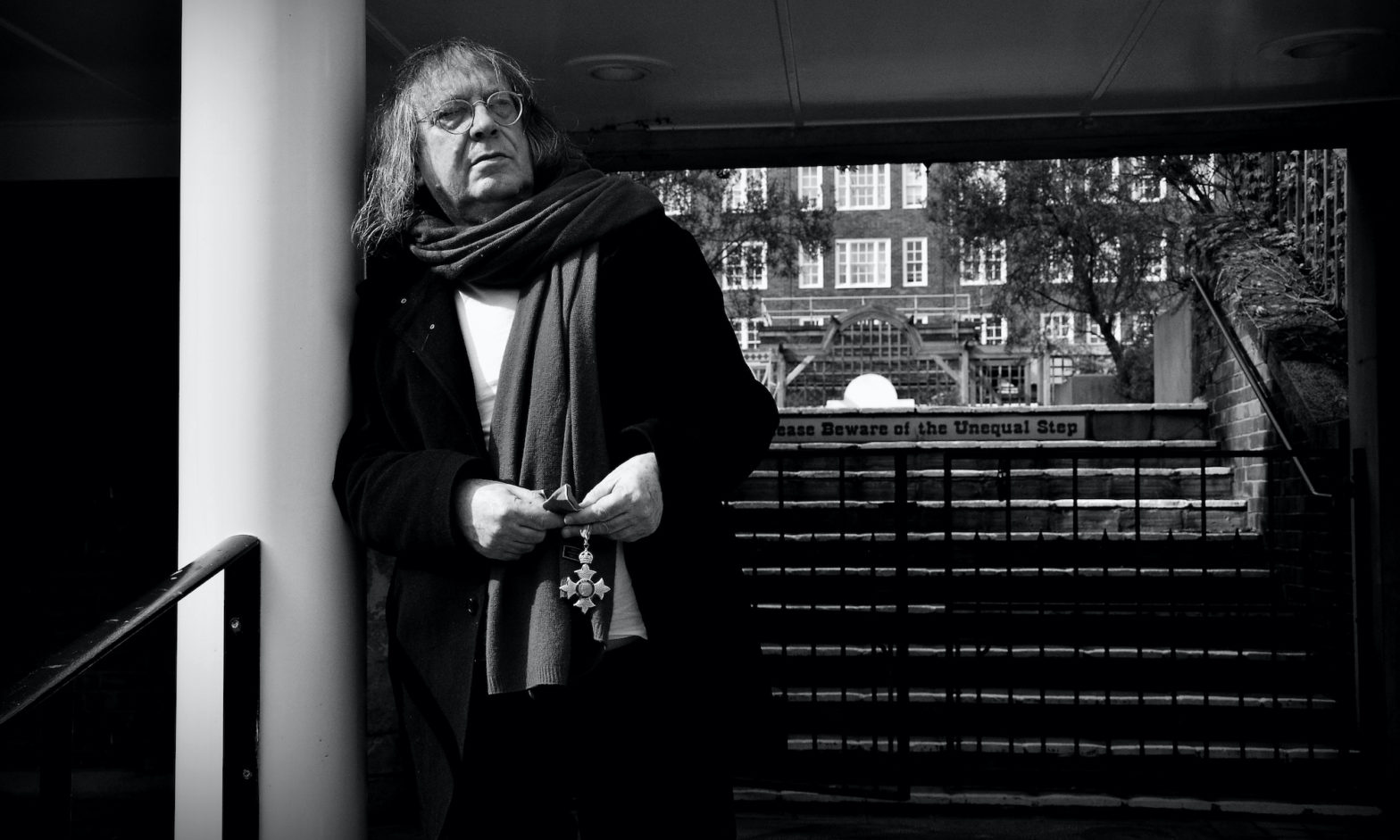 David Gothard graduated with an MA in Philosophy and African History from Edinburgh University during four years when student drama played an important part. As a British Council post-graduate in Budapest, he directed pioneering and provocative productions of TS Eliot, Beckett and Pinter. He worked at the Royal Court Theatre, London, under the artistic directorship of Lindsay Anderson and William Gaskill.

He joined Riverside Studios in London in 1977 under Peter Gill, during a seminal period: In the opening season were launched a now legendary “The Cherry Orchard” from Peter Gill, Athol Fugard’s work from South Africa, Miro’s first theatre collaboration since Diaghilev and Shuji Terayama’s “Directions to Servants”.

A year earlier in 1976 David had already used Riverside for Tadeusz Kantor’s The Dead Class which had provoked a sensation in the history of the Edinburgh Festival with its television coverage setting the precedent for international work ,not confined to one art form,setting a style for Riverside being packed with Riverside (the place) events rather than a strict separation of the arts.You went for the place’s energy and surprise as well as the art event. Kantor’s own pop-up exhibition with Boltanski ran parallel to the Whitechapel’s formal exhibition curated under Nicholas Serota.

The relationship between writing and film played an important part in David’s activities at Riverside, even before its 35mm cinema was built, much of it built on the initiative of Jan Dawson, his film colleague. With a 16mm screen suspended from the roof of one of the studios, Bill Forsyth, Peter Greenaway, Lazar Stoianovic, Rebecca O’Brien and Andrew Eaton all developed the roots of their careers. In 1985, Andrei Tarkovsky found a home base there for the build-up for “The Sacrifice.” He ran a working committee for Tarkovsky as they both developed the possibility of “Hamlet ” as a film. Hanif Kureishi had worked in David’s office and their package containing the script of “My Beautiful Laundrette” propelled Stephen Frears and Tim Bevan into a shake-up of the British film scene with the founding of Bevan’s  Working Title company.

The Riverside gallery was uniquely nominated for the Turner Prize in 1984. Under David’s directorship at Riverside residencies flourished, with the likes of Dario Fo, Tarkovsky, Jean-Baptiste Thierre and Victoria Chaplin, Joseph Chaikin, Italo Calvino, Kathy Acker and Samuel Beckett. Wajda’s Nastasia Filipovna from the Stary Theatre, Zbigniew Herbert and Rosewicz were among its Polish successes between returns of Cricot 2 with the later work of Kantor. Exhibitions included the Lodz Constructivist collection, Foksal artists and Stazewski.

Philip Glass and Sol LeWitt’s performance with Lucinda Childs ‘Dance’, led eventually in the next century to an invitation from Spoleto  and Marina Mahler to  the  development of her mother,Anna Mahler’s studio in Spoleto becoming a creative catalyst  in a relationship  with  LeWItt’s studio next door.  Under Marina Mahler, Carol  and Eva LeWitt with Guy Robertson, artists residencies, events and a creative friendship with that city. David’s current lectures at the Universty of the Arts in Chelsea and his relationship  with the Chelsea Space gallery ,currently focus on curating. In 2016 he was awarded the Chelsea Arts Club Award for servics to Art Education.

A personal dream had been achieved under his  artistic directorship with the bringing into Riverside of the  legendary but unsubsidised Motley Design Course,founded by radical vision of great performance visionaries in the thirties. Marcel Breuer designed in Islington a pioneer theatre for Michel St Denis ,later of the Julliard, Komisarjevsky,formerly of the Moscow Arts Theatre,George Devine,founder of the Royal Court Theatre and Glen Byam Shaw,founder of the Stratford Shakespeare Company,later the RSC ,with Motley,designers from Broadway through Agnes de Mille to a domination of British Theatre in their radical new vision expressed in the founding of the Royal Court Theatre with a set of principles respected to this day with  love for writing. and a love for Brecht. Film design in the great sixties films were their territory . Motley’s first graduate was Jocelyn Herbert whose working relationship with Samuel Beckett led to his residencies at Riverside with the San Quentin Prison Company directed by Beckett in ‘Waiting for Godot’ and ‘Endgame’ before the shows went off to the Abbey Theatre ,Dublin.

The powerful ingredient of this training for performance was its close relationship with production and stage workers. At Riverside it meant all from practical philosophy,students earning money,seminars by legends like Matta and Dario Fo and the residencies of directors like Simon Usher and David Leveaux.It was a solid creative partnership through to its destruction by politicians when  the Almeida Theatre under Pierre Audi gave them shelter.

Today, David fights for the resurrection of Motley with its chairman, Paul Handley, production director of the NT. Motley designed more shows on Broadway and the Met than any other designer. Jocelyn Herbert,under John Dexter visually  transformed the Metropolitan Opera House.

David was asked by Robert Brustein to solve a gap in the American Repertory Theatre season in Cambridge, MA, and the resident director,with Simon Usher  and Associate at Riverside after Gill,was David Leveaux whose production of “A Moon For the Misbegotten” from Riverside ,won Tonys on Broadway where he has been working strongly ever since. His directorship of Theatre Projects,Tokyo led to a working partnership ,not least ,Japanese, designer training at Motley, workshop on Shakespeare and Mishima in Japan by David and generous support. David directed a succesful production of Neil Labute’s “Bash” there.

At Riverside he directed the Festival performance programme for Pupul Jayakar for the pioneer Festival of India marking Mrs Gandhi’s state visit,most remembered for its recitals by gurus of dance and music but achieving the visit of Habib Tanvir, ever remembered director of Indian Village Theatre .

In 1988 David was awarded the first Kingman Brewster Theatre Fellowship of the British American Arts and workshopped new writing in the USA, giving seminars on Tarkovsky and new British film at Columbia University. He was based at the Actors Studio in New York and at the National Theatre in Washington DC. In the late eighties he also introduced the Frankfurt Ballet, Miro’s Mori el Merma and the theatre work of Andrzej Wajda to America at the Pepsico Summerfare festival at Purchase, upstate New York.

He returned to London to commission first-time directors and writers for a series of shorts for Channel 4. He then continued his working association with Hanif Kureishi as a producer on London Kills Me.

He accepted the Artistic Associate’s appointment at the Leicester Haymarket Theatre,where John Dexter’s work with Jocelyn Herbert of “Orestes” and Julius Caesar” were acclaimed with the UK production of “M.Butterfly” with Anthony Hopkins and a set by Eiko Ishioka. Beckett was active in creating “Krapp’s Last Tape “with David Warrilow and Herbert,directed by his Polish translator and friend,Antoni Libera. The Rustaveli Company from Georgia visited and the work of Joseph Chaikin ,Jean-Claude von Itallie  and Sam Shepard were celebrated  with the work of Leicester writers,including Joe Orton.

In the late eighties, after leaving Riverside, David returned to Eastern Europe. In Yugloslavia he directed Howard Barker’s “The Castle” with the performance artist Katalin Ladic and Denes Dobrei. Lazar Stoianovic and Andras Forgac were dramaturg. Then, for fifteen months, David chaired an international committee on theatre projects involving leading companies from Hungary, Germany and Italy, including the representation of all the national groupings within the former-Yugoslavia. During the war he returned to teach actors, writers and directors at the Slovenian Theatre and Film Academy and wrote a report on Slovenia’s potential participation in the cultural programme of the European Community.

In 1998 and 1999 he taught screenplay writing for the Soros Foundation in Ljubljana. Productions of Hamlet, then Macbeth re-launching the National Theatre of Kosova, were initiated with David directing while he was president of the jury at the Sarajevo Festival in autumn 1998. The work toured stricken cities and then opened the first World Aids Conference arts programme in Durban ,South Africa as guests of the Zulu nation and Moslem students. He directed the first new play in Kosovo in both languages to both cultures. He contiues as a board director of the Prishtina Film Festival.

Early in 1999, David returned to Budapest to the Merlin Theatre where he directed an experimental production based on Ted Hughes’ Crow and the work of Janos Pilinsky and Sheryl Sutton. There will be an exhibition of his work at the Theatre Museum in Budapest in 2018.

David has regularly been invited on to the jury of the Playwrights’ Festival and to teach at the Playwrights’ Workshop at the University of Iowa. There he helped initiate a team of writers to form a company for touring new plays in the mid-west. His own directing of David Hancock’s Ark Tattoo came to New York. In November, 1998, he directed a workshop of a new play, “In the Sweat”, by two Iowa writers, Naomi Wallace and Bruce McLeod, for a youth project at the National Theatre. In the summer of 2003 he directed a new play by Brian Tuttle in Columbus, Ohio and an open air production of Chekhov’s “The Seagull” in the park. In 2005 he directed a second Tuttle play in Boston. In Roanoke,Virginia at Mill Mountain Theatre, he directed Wallace’s “The Fever Chart” with Ismail Khalidi in 2009.

In 2005,a film “Altitude” was made touring Tibet and parts of rural China,recording David as director of a Shakespeare performance by Joseph Fiennes with a percussionist,improvised in monasteries throughout Tibet.Fiennes and he directed the first actors workshop on Shakespeare in the University of Lhasa.

In January 2007, he became Associate Artist at the Abbey Theatre, Dublin, and made a production at the Kasser Theatre in Montclair, based on New Jersey artists, William Carlos Williams, Robert Smithson, George Segal, Leroi Jones and Allen Ginsberg.

David is a member of the judging committee for the George Devine Award for new playwriting and the Jan Dawson and Katrin Carlidge’s awards for independent film.

His recent work with one of his graduates in creative writing in Iowa, Joshua Casteel, involved the creativity of war veterans leading to a new opera currently at the University of York, written by James Cave. David’s earlier music work helped produce the explosion for New Music from early Gavin Bryars and Michael Nyman, introducing the likes of Laurie Anderson and Glenn Branca to London. Casteel’s “The Return” received an initial reading at the Martin E. Segal Theatre Centre in New York. A full version toured to Dublin, via Princeton,Chicago and New York, involving workshops and conferences with veterans. A new touring production for the USA produced by a graduate, Artem Yatsunov,from Broolkyn.

His experience working in Europe recently included producing a section of the Slovenian Graphics Biennale 2016, curated by Nicola Lees. David continues to produce Independent film; in 2017 a film titled “Forgotten Man” directed by Arran Shearing which has just won “Best Independent Film” in Sydney, Australia. He is Executive Producer of the Mahler Foundation’s first film commission “Houses of Mahler”, directed by Matthew Burdis.

He regularly teaches student directors on writing at the National Film School and at Birkbeck in the University of London. He is a guest lecturer at Peak Performances at Montclair State University, for the International Writers Programme at the University of Iowa with the Playwrights Workshop, and Chelsea College of Art and Design (MA Curating).

In recent years since 2010 with Marina Mahler and Carol LeWitt, he founded the Anna Mahler/Sol LeWitt residencies for artists, writers, musicians, and curators in the former studios of Mahler and LeWitt in Spoleto, Umbria.