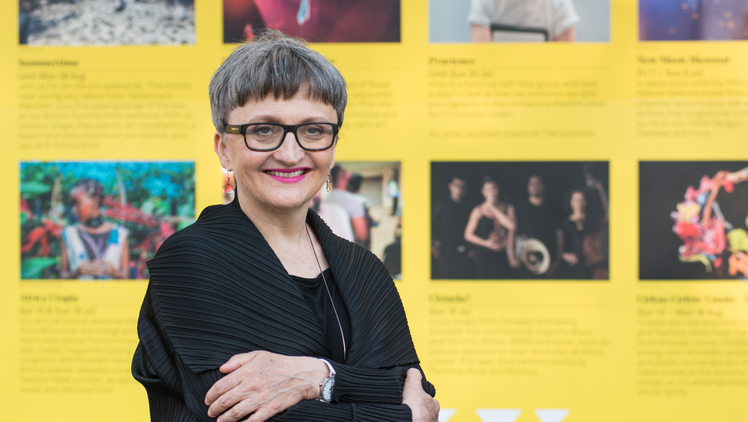 Gillian Moore is Director of Music and Performing Arts at Southbank Centre in London, overseeing a large program of classical and contemporary music and managing a team of programmers in literature, comedy, and performance in one of the world’s largest cultural institutions.

At Southbank Centre, Gillian has been committed to changing the landscape for music, developing initiatives in finding new audiences, and in supporting new music. She has also been at the forefront of encouraging wider debate and positive action to address issues of diversity and equality in music, through initiatives such as Southbank Centre’s Women in Music programs and collaborations with Chineke! Orchestra, Southbank’s Associate Orchestra.

During her distinguished career, she has collaborated with and commissioned works from many of the great musical and artistic figures of our age. Gillian was awarded an MBE for her services to British music in 1994 and a CBE in 2018.

Gillian was born in Glasgow, and has worked to bring music and the arts to the widest possible community for over 35 years.

In 1983, Gillian became the first Education Officer at a UK orchestra, taking the London Sinfonietta into schools and prisons before becoming Head of Education at the Southbank Centre.

Returning to the London Sinfonietta as Artistic Director between 1998 and 2006, Gillian commissioned many new works and developed an approach that connected new music to a wider culture, including visual art, dance, and electronica.

Gillian is also a sought after writer on music. In 2019, her book ‘The Rite of Spring – Music and Modernity’ [Head of Zeus] was published to critical acclaim, and she has written for The Guardian, The Sunday Times, and many other media outlets.

As a broadcaster, she has been a regular contributor to BBC Television’s coverage of the Proms and makes regular appearances on BBC Radio 3, most recently writing and presenting a series of short programs on composers and key moments in 20th-century music as part of BBC Music’s Our Classical Century. Gillian was a jury member for the Leeds International Piano Competition in 2018, and in 2019 was named one of the ten most powerful women in music in BBC Radio 4’s Woman’s Hour ‘Top 40 Women in Music Power List’.