Adolf Franz Karl Viktor Maria Loos was an Austrian and Czechoslovak architect. He was influential in European Modern architecture, and in his essay Ornament and Crime he abandoned the aesthetic principles of the Vienna Secession. In this and many other essays he contributed to the elaboration of a body of theory and criticism of Modernism in architecture and design.

Loos was born on 10 December 1870 in Brno, then called Brünn, in the Moravia (Mähren) region of the Austro-Hungarian Empire. His father, a German stonemason, died when Loos was nine. Loos attended a technical school in Liberec and later studied at Dresden University of Technology.

In 1893 Loos travelled to the United States for three years. In his first year he visited the World’s Columbian Exposition in Chicago. He visited St. Louis and did odd jobs in New York. Loos returned to Vienna in 1896 and became friends with Ludwig Wittgenstein, Arnold Schoenberg, Peter Altenberg and Karl Kraus. Loos visited the island of Skyros in 1904 and was influenced by the cubic architecture of the Greek islands. When the Austro-Hungarian Empire collapsed after World War I Loos was awarded Czechoslovakian citizenship by President Masaryk.

Loos was married three times. In July 1902, he married drama student Carolina Catherina Obertimpfler. The marriage ended three years later in 1905. In 1919, he married 20-year-old Austrian-born Elsie Altmann, a dancer and operetta star and daughter of Adolf Altmann and Jeannette Gruenblatt. They divorced seven years later in 1926. In 1929 he married writer and photographer Claire Beck. She was the daughter of his clients Otto and Olga Beck, and 35 years his junior. They were divorced on 30 April 1932. Following their divorce, Claire Loos wrote Adolf Loos Privat, a literary work of snapshot-like vignettes about Loos’ character, habits and sayings, published by the Johannes-Presse in Vienna in 1936. The book was intended to raise funds for Loos’ tomb.

In 1918 Loos was diagnosed with cancer. His stomach, appendix and part of his intestine were removed. By the time he was 50 he was nearly deaf. In 1928 Loos was disgraced by a pedophilia scandal. He died aged 62 on 23 August 1933 in Kalksburg near Vienna. Loos’ body was taken to Vienna’s Central cemetery to rest among the great artists and musicians of the city, including Schoenberg, Altenberg and Kraus, some of his closest friends and associates.

Loos authored several polemical works. In Spoken into the Void, published in 1900, he attacked the Vienna Secession, at a time when the movement was at its height.

In his essays, Loos used provocative catchphrases and is noted for the essay/manifesto entitled Ornament and Crime, written in 1910. He explored the idea that the progress of culture is associated with the deletion of ornament from everyday objects, and that it was therefore a crime to force craftsmen or builders to waste their time on ornamentation that served to hasten the time when an object would become obsolete (designtheory). Loos’ stripped-down buildings influenced the minimal massing of modern architecture, and stirred controversy. Perhaps surprisingly, some of his architectural work was elaborately decorated, although more often inside than outside, and the ornamented interiors frequently featured abstract planes and shapes composed of richly figured materials, such as marble and exotic woods. The visual distinction is not between complicated and simple, but between “organic” and superfluous decoration.

Loos was also interested in the decorative arts, collecting sterling silver and high quality leather goods, which he noted for their plain yet luxurious appeal. He also enjoyed fashion and men’s clothing, designing the famed Kníže of Vienna, a haberdashery. His admiration for the fashion and culture of England and America can be seen his short-lived publication Das Andere, which ran for just two issues in 1903 and included advertisements for ‘English’ clothing. In 1920, he had a brief collaboration with Frederick John Kiesler – architect, theater and art-exhibition designer. 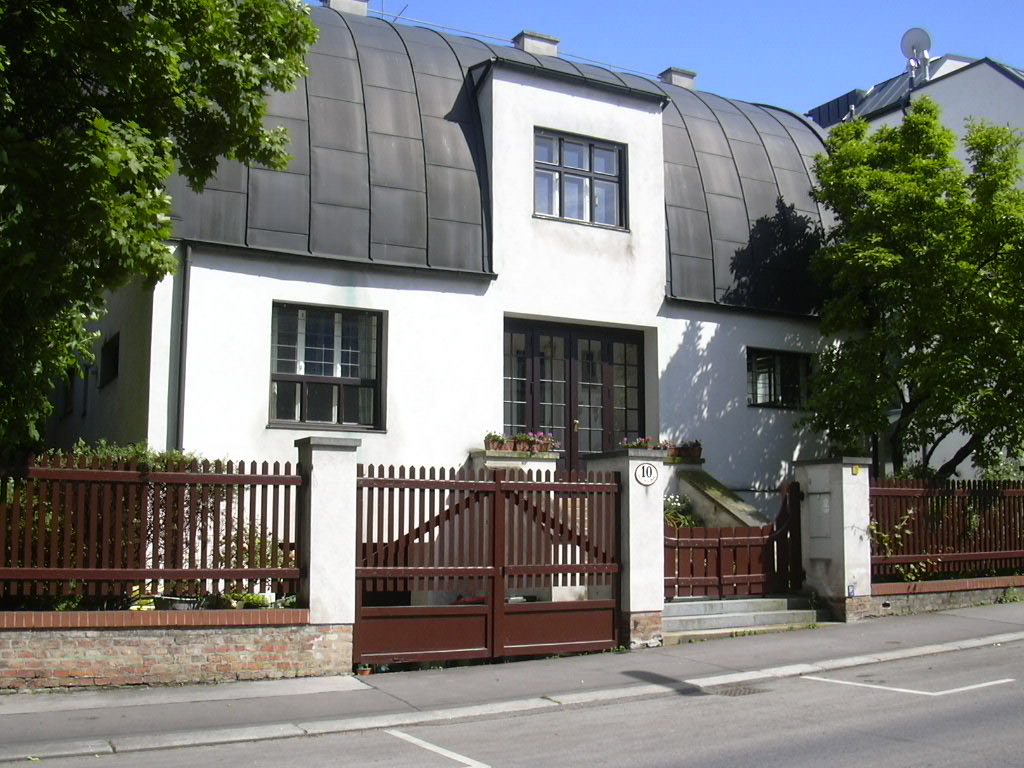